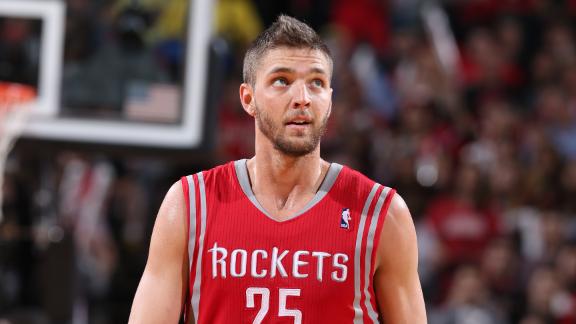 LAS VEGAS -- Chandler Parsons will arrive in Dallas with a three-year, $46 million deal and plenty of motivation after being "offended" by the Houston Rockets during the restricted free-agency process.

Parsons told Yahoo! Sports that it bothered him that Houston, which declined its right to match the Dallas Mavericks' offer and allowed Parsons to go to the Rockets' Interstate 45 rivals, made it clear the franchise didn't consider Parsons good enough to be the third-best player on a championship contender.

"Honestly, I was offended by the whole process," Parsons told Yahoo! Sports on Monday. "They publicly said that they were going out looking for a third star when I thought they had one right in front of them. I guess that's just how they viewed me as a player. I don't think I've scratched the surface of where I can be as a player and I think I'm ready for that role.

"You can't knock them for always trying to get better. [Houston general manager] Daryl Morey is very aggressive, is a genius, a great GM and I have nothing but respect for those guys. And they are looking to make their team better. That's what they were doing. I just thought I could be that guy that could do that."

The Rockets would have matched the offer to Parsons if Houston had successfully recruited All-Star power forward Chris Bosh to join center Dwight Howard and shooting guard James Harden as the franchise's proven stars.

However, once Bosh opted to re-sign with the Miami Heat, Morey reconsidered his intention to keep Parsons, valuing future salary-cap flexibility over a 25-year-old small forward who averaged 16.6 points, 5.5 rebounds and 4.0 assists per game last season.

The Mavs, meanwhile, made Parsons their top priority after long-shot attempts to woo superstars Carmelo Anthony and LeBron James. Dallas got Parsons to agree to the offer sheet July 9, forcing the Rockets to make a difficult decision.

The Mavs had to hold their breath until Sunday afternoon for Houston to make its decision, even after the Rockets acquired a more affordable small forward, signing Trevor Ariza to a four-year, $32 million deal.

Now that the dust has settled, Cuban says he is pleased things turned out the way they did.

"It feels good," Cuban said. "We obviously value him very highly. We think he's going to contribute a lot."

Cuban said Parsons was their No. 1 target with a specific reason in mind.

"I looked at all the main guys that were young that we thought would be available, and we loved his game," Cuban said. "We liked him the best of all the free agents, and that was point one.

"When you looked at the numbers relative to Houston's cap position, he seemed the most obtainable."

While the Mavs had to wait out the restricted free-agency process for almost the full three days, there was a sense they ultimately would get their man.

"No, because we did the numbers," Cuban replied when asked whether he was surprised to get Parsons. "We knew what the numbers were. We knew, based off the numbers, they were going to have to make some tough choices."

Cuban added that had he been in the Rockets' shoes, he would have matched the Mavs' offer sheet.

In a possible attempt at damage control after the Rockets' decision, Morey said he didn't believe Parsons could be the third-best player for a title contender.

"I'm not going to go there," Cuban said. "Daryl is entitled to his opinion. That's the way it goes."

While Cuban and Morey might disagree on their Parsons projections, their two teams both are in the market for another forward.

Sources have told ESPN.com's Marc Stein that the Mavs and Rockets have barged into the Mike Miller sweepstakes. The attempt is to acquire a perimeter-oriented small forward and keep James' sharpshooting teammate from Miami away from Cleveland.

Last season, the Rockets preferred to keep Parsons on the floor as much as possible, playing him 37.6 minutes per game. That ranked seventh-most in the league and was 1.1 minute per game shy of league leader Anthony.

"He's the old Nellie [Don Nelson] point-forward, personified," Cuban said regarding Parsons. "It gets us younger. The good news about all of the experience we had, it really allowed us to modify and give the Spurs a run for their money last year. The bad news is that we had to restrict minutes. Restricting minutes was the big challenge.

"He's a guy that we can keep out there a lot longer. With Vince [Carter], 'Trix [Shawn Marion] and Dirk [Nowitzki], we really had to balance minutes."

Parsons' versatility on offense has drawn widespread praise, but Cuban said he could be underrated on defense.

"He's a willing defender," Cuban said. "One of the reasons I went after him, one of the things I did, I went and talked to all of the scorers that I know and I asked who defended them the best and list the top three, and Chandler was on the list a few times. He's not a shutdown defender, but he's a work-hard defender. He's an irritant.

"I think Coach will do a lot better job with stances, Coach will get on him," Cuban said of Rick Carlisle. "We do a lot of drills for the little stuff like that."

Parsons is eager to play for a franchise that believes he can blossom into a star and envisions an expanded role for him.

"Dallas is the perfect match to where I am in my career," Parsons told Yahoo! Sports. "It's where I can take that next step. They have a great organization. Mark is the best owner in all of sports. I get a chance to play with Dirk for however much longer he has. It will be unbelievable to learn and grown from him and the guys they have.

"We got a chance to win. Coach Carlisle is the best coach in the NBA. It's the perfect situation for me. I'm ready for more leadership. I'm ready for a bigger role. They came at me with a high max offer and viewed me as a franchise player. That's what I wanted."

Parsons Offended By Rockets
Mike Golic and Mike Greenberg react to Chandler Parsons' comments that he was offended by Houston in the free-agency process.