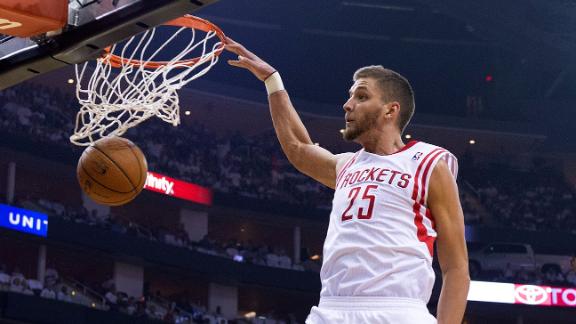 However, for Houston to execute its plan, the Rockets must first make several salary-dump deals over the next two days to make space to sign Bosh to a near-max deal. Barring a complicated sign-and-trade deal, the Rockets would not have room to give Bosh a full max deal worth $88 million over four years and keep Parsons along with max-salaried stars Dwight Howard and James Harden.

Houston has until 11:59 p.m. Sunday to match the Mavs' offer to Parsons, who currently accounts for a $2.9 million hold on the Rockets' cap. The Rockets can exceed the cap to keep Parsons.

The Mavs are also maintaining contact with the agents of free-agent small forwards Paul Pierce and Shawn Marion, who played the last five seasons in Dallas.

The Parsons offer sheet, which starts with a $14.7 million salary, accounts for the rest of the Mavs' cap space after the soon-to-be-official deals for Dirk Nowitzki and Devin Harris are done.

Woman attempting to go up stairs during power outage dies after oxygen tank runs out
When did you realize COVID changed everything?
US advisers endorse single-shot COVID vaccine from J&J
NJ mom dies of COVID days after giving birth to third son
11 hurt in multi-vehicle accident in Brooklyn
Show More
'Gorilla Glue girl' has message for Black women about 'hair love'
Girl's hearing loss discovered from mask mandate leads to help for boy in Honduras
Teacher steps in after young student cries over zoom because she was hungry
The Countdown: FDA panel endorses 3rd vaccine; House to vote on COVID relief bill
Carranza steps down, Porter to serve as NYC Schools Chancellor
More TOP STORIES News