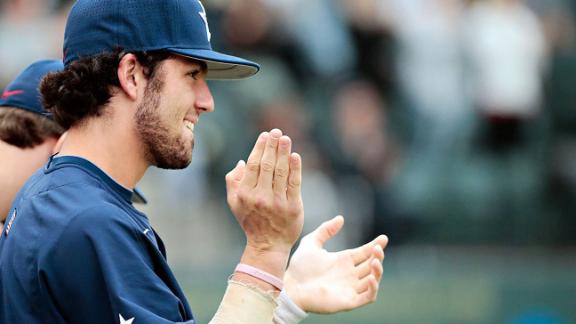 Maybe that trio won't resurrect the glory days of Ozzie Smith, Cal Ripken Jr. and Alan Trammell, or bring to mind the Derek Jeter-Nomar Garciaparra-Alex Rodriguez contingent in the 1990s. But if things play out as hoped, they at least might prevent the impact, American-born shortstop from becoming an endangered species.

Scan the list of the most exciting or promising shortstops in baseball these days, and you'll find players from the Netherlands Antilles (Andrelton Simmons), Cuba (Jose Iglesias and Adeiny Hechavarria), Venezuela (Alcides Escobar), Aruba (Xander Bogaerts) and Puerto Rico (Carlos Correa and Francisco Lindor), to name a few locales.

The U.S. shortstop representation isn't quite as dynamic. Of the 33 shortstops with at least 100 plate appearances this season, only 10 (Troy Tulowitzki, Brandon Crawford, Marcus Semien, Zack Cozart, Ian Desmond, Brad Miller, Ryan Goins, Jordy Mercer, Nick Ahmed and Jimmy Rollins) are homegrown. Only three of them -- Tulowitzki, Rollins and Desmond -- have ever appeared in an All-Star Game. And Rollins is much closer to the end of his career than to his prime years.

Why is the case? Talent runs in cycles at a lot of positions. But two former big-league shortstops who attended the draft as goodwill ambassadors suggested it's more about a surplus of skilled shortstops coming out of Venezuela, the Dominican Republic, Puerto Rico and other venues than a dearth of talent in the states.

"When I played, we started to have more [shortstops] from Venezuela and the Dominican," said former big leaguer Gary DiSarcina, now a coach with the Los Angeles Angels. "I don't care whether guys are black, white or green. A lot of those guys were better than me. I knew I wasn't going to get more athletic. So I needed to know positioning and study the charts."

DiSarcina pointed out that MLB has also become more conscious about scoping out athletes in more far-flung locales than when he played in the 1990s. "They're finding players everywhere and putting more money into player development now," he said.

Trammell, a six-time All-Star with the Detroit Tigers, pronounced himself a fan of Simmons, Iglesias and some of the acrobatic shortstops playing today.

"It doesn't matter to me what country a guy is from," Trammell said. "A shortstop is a shortstop. I'm very biased toward the position. I hope all these kids do a great job.

"I just like looking at good shortstops who have good actions. I like guys that are reactive. I don't like them to be deadbeats. One of the guys in the middle -- whether it's the shortstop or the second baseman -- needs to be in control and take charge. That's the way we were brought up, and I believe in that."

Eight shortstops were taken in the first round Monday. And when University of Arizona shortstop Kevin Newman (Pirates), Florida's Richie Martin (Oakland) and the University of San Diego's Kyle Holder (Yankees) went off the board, they joined Swanson and Bregman to make it five college shortstops to go in the first round. According to Baseball America's John Manuel, that broke the 1997 record of four college shortstops selected in the opening round.

The 1997 class was not one to remember. Cal State-Northridge's Adam Kennedy had the most accomplished career of the four shortstops chosen in the first round, and he spent most of his time as a second baseman over 14 seasons in the majors.

Go, Commodores
After Swanson went to Arizona with the first pick in the draft, two of his Vanderbilt Commodore teammates also dropped off the board in the first round. Pitcher Carson Fulmer went to the Chicago White Sox with the eighth choice, and pitcher Walker Buehler went to the Los Angeles Dodgers with the 24th choice.

Big Apple adventure
Brendan Rodgers made the trip to New Jersey from his home in Florida to attend the draft festivities. He brought along 22 family members and friends who erupted in wild applause when he went to the Colorado Rockies with the third overall pick.

Rodgers had planned on staying home until fellow Floridian Nick Gordon, who attended the draft last year with his father, Tom, and was chosen by the Minnesota Twins in the first round, urged him to attend.

"This was a life-changing experience and a once-in-a-lifetime opportunity," Rodgers said. "I could have stayed home and had a bunch more people come, but this was so special to me. I really have no words right now. I'm in awe. I don't think my parents could be any prouder, and I couldn't be any prouder of myself."

Rodgers took a ferry ride to the Statue of Liberty during his trip to New York and took some swings at the Chelsea Piers golf driving range. During the lead-up to the draft, he also enjoyed the opportunity to meet one of his all-time favorites, former New York Yankees shortstop Derek Jeter.

"He's such a great guy; getting to meet him was unreal," Rodgers said. "He told me, 'Always have fun with the game. Never be too hard on yourself. You're going to struggle, but have as much fun as you can all the time.'"

Fashion maven
Indiana high school pitcher Ashe Russell, one of four players who attended the draft, showed up in a bright red shirt with white dots, a dark blue blazer and a pair of black leather Stacy Adams shoes with an alligator pattern. He credited his mother with assembling his eye-catching wardrobe.

"A lot of people liked it," Russell said. "I can't thank my mom enough. She did it right."

Russell, 6-foot-4 and 205 pounds, struck out 76 batters in 48 innings as a senior at Cathedral High School in Indianapolis to win the state's Gatorade Player of the Year award. He has been compared to Boston's Clay Buchholz by some draft observers. But he prefers a more accomplished right-hander from Detroit.

"I like to compare myself to Justin Verlander," Russell said. "A lot of people say our mechanics are completely different. But I like the fact he's a big guy and he maintains his velocity for an entire game, which I seem to be able to do. It's a blessing. Hopefully, I can keep this up."

Changes in store?
Two years ago, eight players attended the draft at the MLB Network studios. Last year, seven players made it to Secaucus. This year, there were only four. Rodgers and Russell were joined by New York high school outfielder Garrett Whitley, who was taken by the Tampa Bay Rays with the 13th choice, and Pennsylvania prep pitcher Mike Nikorak, who went to Colorado 27th overall.

In his first year overseeing the draft, new commissioner Rob Manfred said MLB is considering some steps to attract more talent to the event. One obvious obstacle: Some players couldn't make it to New Jersey because they're at the College World Series in Omaha.

"We have certain logistical limitations, the most important of which is a lot of the college players are still playing," Manfred said. "This event, like every event, is about the players. We're going to try to have some conversations with the NCAA about a little better coordination of calendars in the hope we can make the event even better moving forward. The opportunity for our fans to see young men being drafted -- and the excitement it generates for those young people -- makes for great television. It's something we need to strive to have more of."

Manfred declined to address speculation that the draft could be moved -- possibly even to Omaha. But he thinks some issues could be resolved in a way to allow more players to appear.

"I don't think we're talking about huge shifts," Manfred said. "Obviously, we have needs in terms of getting players signed and getting them out there playing. And obviously the College World Series is an important event. I think with some minor adjustments, we might be able to make a calendar that would be better for both of us."