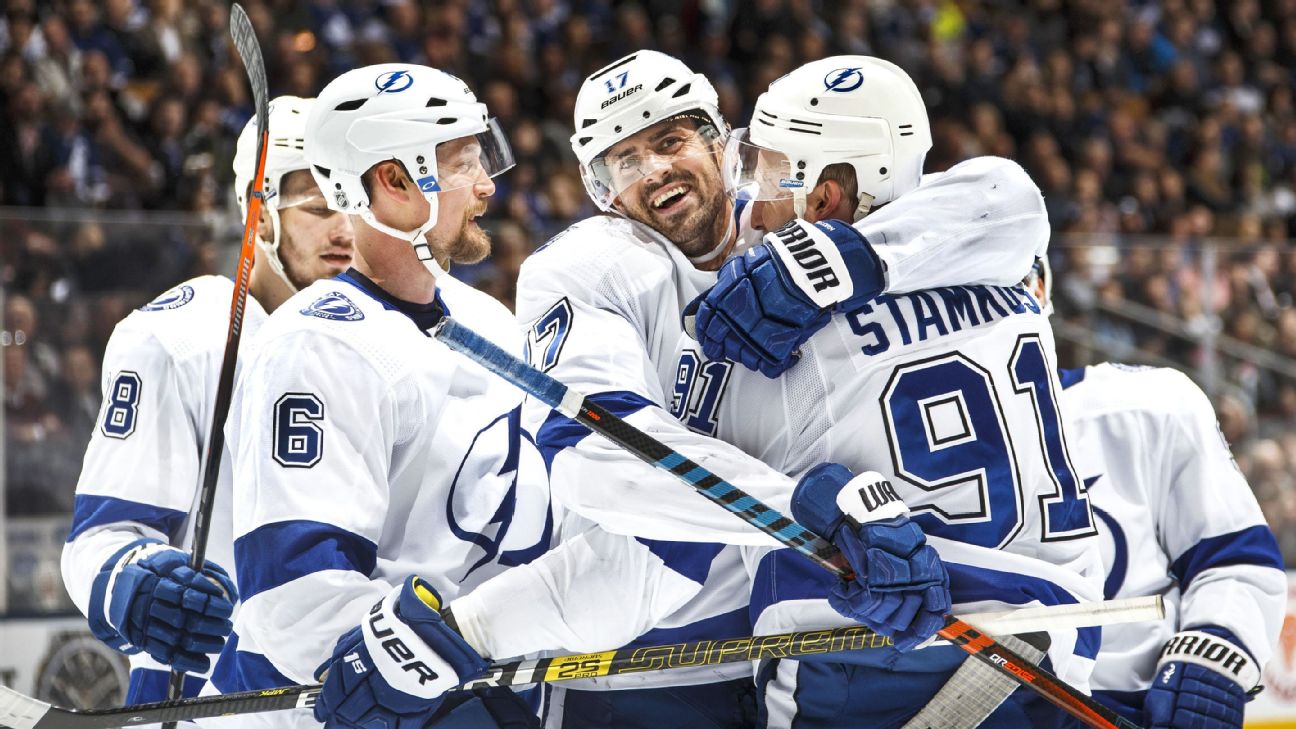 LAS VEGAS -- The NHL Awards are this week in Las Vegas, giving the hockey world a chance to honor the best players the regular season had to offer, while trying to forget how the majority of them lasted about as long in the playoffs as the casual fan's interest.

The awards are a good snapshot of the NHL season, but not the most comprehensive one. To that end, ESPN once again presents its Alternative NHL Awards, from the ridiculous to the sublime. Enjoy!

The Team of the Year shouldn't just be the one that hoists the Stanley Cup. It should be the one that, in essence, provides a time capsule look at the NHL in 2018-19. To that end, the Team of the Year was the Tampa Bay Lightning. No other team in the NHL personified the offensive velocity of the current incarnation of the game, or the meticulous asset management used to construct it.

But also, no other team better exemplified the preposterous parity of today's league or the irrelevant nature of regular-season dominance. And no other team provided the antithesis of what the St. Louis Blues did to capture their first Cup: fundamental bludgeoning rather than risky flourish, and the innate ability to process adversity instead of melting down because you walked into Game 2 on home ice thinking you were owed a win and then fell apart when the Columbus Blue Jackets embarrassed you.

Anze Kopitar went from being a Hart Trophy finalist to the worst offensive season of his career, joining Jeff Carter, Tyler Toffoli and 35-year-old Ilya Kovalchuk in that latter category. Drew Doughty went from second for the Norris Trophy to a minus-34. When Jonathan Quick did play, it was to an astounding minus-29.21 goals saved above average. John Stevens was fired after 13 games. Jake Muzzin was traded after 50 games. They couldn't even succeed in the lottery, finishing with the second-lowest points in the NHL and yet picking fifth. Yuck.

And now, for your entertainment pleasure, I present to you some crying Marchand memes. pic.twitter.com/8oznnwdPzP

Look, in a way it's an honor. Brad Marchand has so infuriated opposing fan bases that his moment of raw grief following the Bruins' Game 7 loss to the Blues was immediately propagated for comedic purposes. And while admittedly inhuman and cruel ... look, the one where he's licking his own tears is kind of ingenious, if we're being honest.

Feud of the Year: Don Cherry vs. The Storm Surge

Canada's preeminent curmudgeon unleashed several unhinged rants against the Carolina Hurricanes' choreographed victory celebrations, claiming that they were an embarrassment to hockey and that the Hurricanes were "a bunch of jerks." Carolina got the last laugh, turning that line into a best-selling T-shirt and de facto rallying cry for its incredible run to the Eastern Conference final.

Player of the Year: Ryan O'Reilly

To go from having your joy of hockey sucked from your body during a disastrous season with the Buffalo Sabres -- to the point where you question whether you are, in fact, the source of all of these losing seasons in your career -- to hoisting the Stanley Cup and the Conn Smythe Trophy in just over a year's time ... that's just like a hockey fable right there. When the Blues were bad, O'Reilly was good. When the Blues were good, O'Reilly was great. A revelatory season for the hirsute center, and the best of the year.

The Philadelphia Flyers center had a minus-27.73 goals-for percentage relative to his teammates, had three points in 27 games and was demoted to the AHL in February before leaving for the KHL after the season. Oh, right: He was also charged with drug offenses in Finland, allegedly buying more than 8 grams of cocaine from a drug ring in 2018. So, no, not the best season!

GM of the Year: Jarmo Keklinen

He shot his shot, the Columbus Blue Jackets stunned the Lightning and made it to the second round for the first time in franchise history. Given where the bar was set, that's a success. If nothing else, we honor a GM who felt fortune would favor the bold, and we salute that.

Fan of the Year: Laila Anderson

"I couldn't thank them enough for helping me get through my fight." @StLouisBlues fan Laila Anderson is a #StanleyCup champion in our eyes. She spoke to @Jackie_Redmond on the ice after Game Seven. pic.twitter.com/rxZagRooQt

This young St. Louis Blues fan became an endearing (and enduring) part of their Stanley Cup journey. Laila has been battling hemophagocytic lymphohistiocytosis, or HLH, a life-threatening immune disease. Only 15 other children in the world have been diagnosed with it, according to media reports. The Blues were her inspiration during her recovery from a bone marrow transplant.

When she was healthy enough, Laila's mother surprised her with tickets to Game 3 of the Western Conference final. She would attend every playoff home game after that and was on the ice after the Blues' Game 7 win in Bostonand at the victory parade in St. Louis. For inspiring her favorite team, and being a heck of a postgame interviewer, Laila Anderson is our fan of the year.

Quote of the Year

"They are f---ing horses---. I don't know how else to put it. The team was OK. But [Tyler] Seguin and [Jamie] Benn were terrible." -- Dallas Stars CEO Jim Lites in a profanity-laden tirade about his star players in December 2018. The Stars would end up making the playoffs and winning a first-round series.

The urinal in the visitors' locker room at TD Garden in Boston, where Carl Gunnarsson vowed to Blues coach Craig Berube that he'd score the overtime game-winner in Game 2 if he had one more shot in the game. He got one, and he did, making quite a splash in the Stanley Cup Final.

In the back of an Uber in Phoenix, trashing your special-teams coach, as the Ottawa Senators can tell you with some insight.

Event of the Year: John Tavares Night at Nassau

Last summer. John Tavares turned his back on the New York Islanders to sign with the Toronto Maple Leafs, his favorite team as a child. On Feb. 28, Islanders fans let him know how they felt about that when the Leafs came to Nassau Coliseum.

Jerseys were defaced with nameplates made of electrical tape that read "LIAR" and "JUDAS" -- and many other Tavares sweaters were burned in effigy or laid down on the road so cars could run them over. Islanders fans chanted "We don't need you" -- as well as more anatomically specific chants -- during warm-ups.

The Islanders would rout the Leafs 6-1. "They always made it tough on the opponent when I played here," Tavares said. "They have their feelings, and that's out of my control."

Who is the current face of the NHL? Sidney Crosby? Alex Ovechkin? Connor McDavid? No, it's definitely Gritty.

The Flyers' ubiquitous mascot appeared everywhere from "The Tonight Show" to "Good Morning America" to political rallies. Other mascots dogged the Flyers' Orange Nightmare Fuel, saying his antics were old tricks in a new package. But that didn't faze Gritty, a mascot who was so bold in his first NHL season that he went streaking at the Flyers' Stadium Series again against Pittsburgh.

I've since been ejected. pic.twitter.com/6ims2CQpsc

It wasn't just the major penalty call in Game 7 of the San Jose Sharks-Vegas Golden Knights. Nearly every series had its moment of officiating controversy, from pucks off the netting that were still in play to the infamous missed hand pass in the Western Conference final to majors that should have been minors to minors that should have been majors to an offside call in the Sharks vs. Avalanche series that was so myopic that the entire notion of using replay for offside came under fire.

An embarrassing postseason of refereeing for the NHL -- so bad, in fact, that expanding video review for officials is likely going to be the solution.

Goal of the Year

Even after docking him points for doing this against Robert Hagg and non-Carter Hart Flyers goaltending, Duclair's incredible effort to collect the puck after falling down and then scoring was one of the wildest goals of the season.

Save of the Year

Not only does Carey Price make this incredible save in the dying seconds of regulation -- he makes a save that literally has Alex Ovechkin applauding the effort for preventing a goal. Incredible.

One of the most remarkable rallies in NHL history. The Knights had a 3-0 lead with 10:47 left in regulation of Game 7. That's when Joe Pavelski was cross-checked by Cody Eakin, collided with Paul Stastny, fell to the ice head-first and began bleeding profusely. Eakin was given a (controversial, then and now) five-minute major.

The Sharks scored four power-play goals in 4:01 to take a 4-3 lead, and you'll not find an arena louder than the Shark Tank when that happened.

But wait! The Golden Knights scored at 19:13 of the third period to send the game into overtime, until unlikely hero Barclay Goodrow sent San Jose to the second round, and Vegas packing.