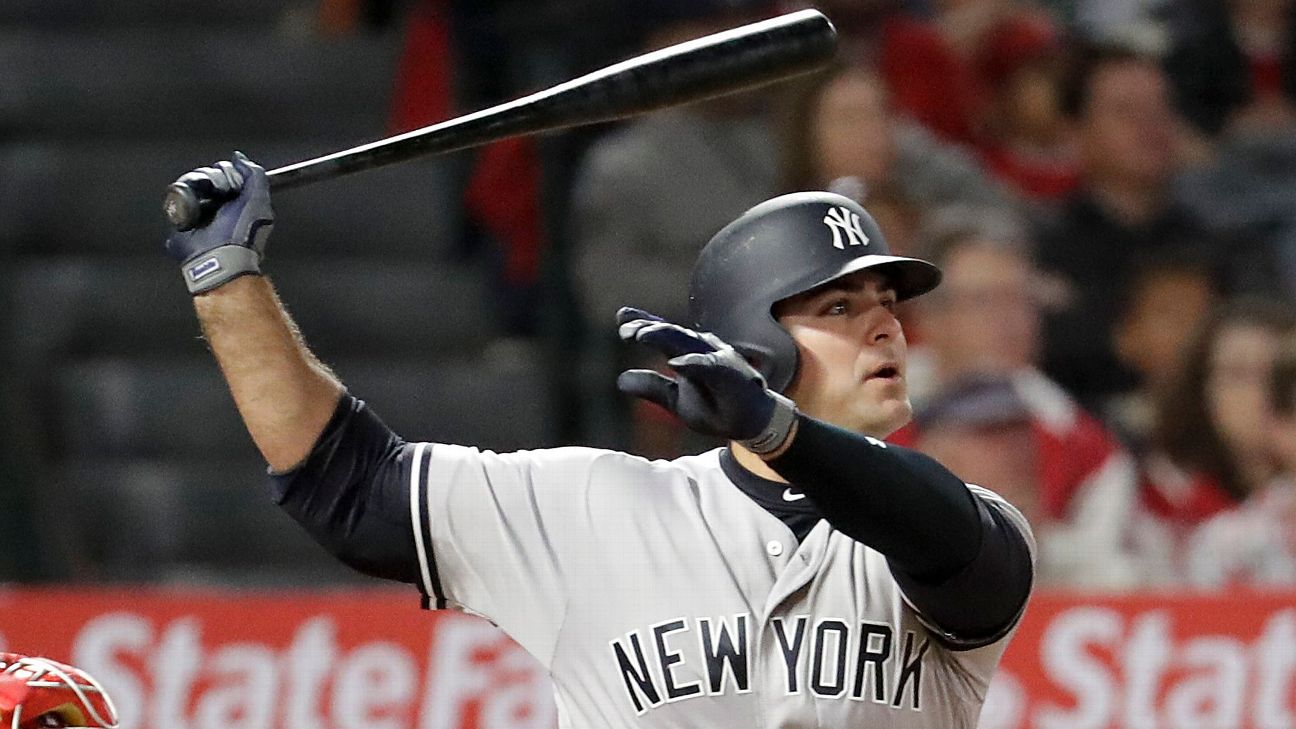 ANAHEIM, Calif. -- All throughout the day Tuesday, Mike Ford found himself the butt of the same joke told by his New York Yankees teammates.

"The running joke was I might have been the only guy in major league history to have two intentional walks and just one hit," the first baseman said, laughing.

Indeed, the Los Angeles Angels walked Ford intentionally twice in Monday's series opener at Angel Stadium, despite the fact the longtime minor leaguer hadn't yet shown off his power at the major league level.

Typically the big boppers with proven pop get the intentional free passes.

After Tuesday's big fly off Ford's bat, maybe he'll start earning more of them. Keep swinging -- and winning -- the way he and the rest of the replacement Yankees have this past week, and few opposing pitchers will want to face any of them.

It was in the fifth inning of Tuesday's 7-5 Yankees win over the Angels when Ford, one of the slew of fill-ins called up from New York's Triple-A affiliate in recent weeks, lined his first career homer into the seats above the massive wall in right field. The ball came to rest into a pair of fans' hands 419 feet away.

Soon, that very same ball, after being scooped up by the Yankees, will be in New Jersey, and in the possession of Ford's parents, Bob and Barb.

"They've supported me through everything," Ford said. "[Want to] give it to them, share the moment with them."

On Sunday, he had his first major league plate appearance, laying down a crucial sacrifice bunt ahead of catcherAustin Romine's walk-off heroics.

On Tuesday, Estrada started for the first time in the majors and picked up his first and second major league hits.

"Everyone tells me he rakes," Yankees first baseman and designated hitter Luke Voit said, "so it's pretty awesome to see that. And to see him hit two (liners) back-to-back was pretty cool."

After Estrada was thrown out via a force following his first hit, cameras caught him and Ford in the Yankees' dugout sharing smiles and a quick hug. Three weeks ago, it was hard for either of them to fathom collecting such milestone hits in an MLB stadium.

With 13 players on their injured list, the Bronx Bombers have had to get creative with how they've been able to field a team. As a whopping two-thirds of the Yankees' Opening Day lineup -- the likes of Aaron Judge, Giancarlo Stanton, Gary Sanchez, Troy Tulowitzki, Greg Bird and Miguel Andujar among them -- sits shelved on the IL, the team has had to rely on unfamiliar names like Ford and Estrada.

Another name even the most casual of baseball observers might not recognize isDomingo German, who might not be ace Luis Severinobut still has been extraordinarily effective to this point in the season, recording a 1.75 ERA through his first five appearances.

German, 26, was particularly dominant Tuesday, giving up an unearned run and four hits in a five-strikeout, 6-inning performance.

"It wasn't real easy for him the first couple of innings. It wasn't his sharpest breaking ball -- certainly that he's had -- but he pitched," Yankees manager Aaron Boone said. "He keeps showing us that even when he's not necessarily at his best, he's still able to go out and have a performance like he did."

Combine an outing like German's with contributions from the newest Yankees, and sprinkle in a breakout game from a pair of the most veteran hitters in the lineup, and there's a recipe for a win. Tuesday's victory was the Yankees' seventh in eight games.

Longtime Yankee Brett Gardner shined batting third, going 4-for-5 and coming a home run shy of a cycle. Voit, much less tenured though the most recognizable power bat in Tuesday's lineup, also had a big evening, collecting his first multihit game of the season.

Going 2-for-4, Voit posted his third career multihomer game in pinstripes, and his first this season. He also reached base in his 34th consecutive game (dating to last season). It's the longest active such streak in baseball.

"It's pretty cool," Voit said of the streak.

"I guess maybe more in the first inning [opposing pitchers] are trying to get more ahead, establish their stuff and maybe they're a little more liable to make mistakes," Voit said. "But I'm just trying to stay in my back side, not pull off, not to get too big and stay with that up the middle approach, right field."

Boone says he feels proud of the contributions from less-heralded players such as Voit, among others throughout his banged-up, depleted roster.

"When you're a little beat up and facing adversity and things are a little difficult, you need everyone to kind of pull their weight," Boone said. "You need everyone to contribute and chip in on a given night, and that's been one of the common themes over the last week, really, is a lot of different people doing their job and having an impact on helping us win a game." 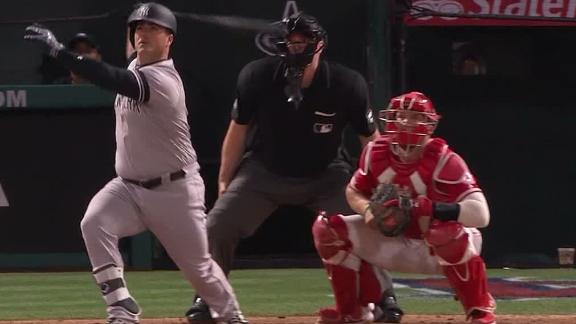