What Aaron Judge's absence means for the rest of his season 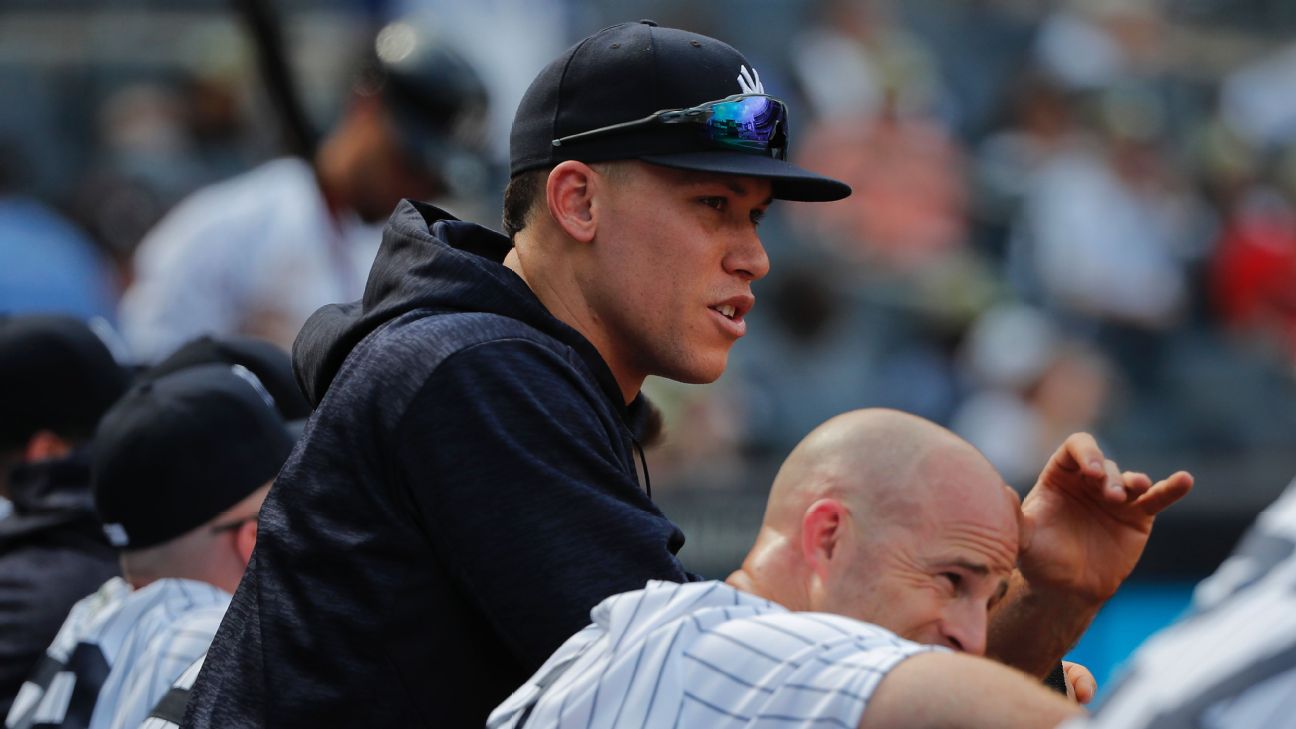 NEW YORK --Aaron Judge has willingly embraced his current role as the New York Yankees' big-bodied hype man and cheerleader on the bench.

But he's long past ready to retire from it.

When the right fielder was taken to a nearby hospital after taking a 94 mph fastball off the outside of his right wrist July 26, the belief was that he would have returned to the Yankees' everyday lineup by now.

"I've got a broken bone. It's still fractured. I've got to give it time to heal," Judge said Thursday. "Just got to make sure I'm 100 percent before I got back out there because I don't want to have a setback."

So was the Yankees' initial three-week prognosis for his return from a chip fracture unreasonable?

"It may have been optimistic, but it wasn't unreasonable," says Stephania Bell, ESPN's injury analyst, a board-certified orthopedic clinical specialist.

As Judge's return from injury takes longer than originally expected, Bell offers this reminder to those feeling uneasy about the now-delayed comeback: "Sometimes things go at a different pace than what you're hoping for. I'm not overly alarmed."

If anything, Bell says she believes Yankees fans should embrace the cautious, steady approach their team has taken with the superstar's recovery.

"Everybody in October -- if they're still playing and he's playing well -- will be very happy that they took their time here," she says.

It's important to note that Bell has not evaluated Judge, nor does she have detailed medical specifics of his injury. But her experience in the field can help in understanding some of what Judge probably has gone through since suffering his injury, and what he might have to look forward to when he returns.

What complicates matters for the Yankees is the 11-10 record they have since Judge was hurt. Although that mark improved by a win with Friday night's rain-shortened 7-5 victory over Toronto, the Yankees could still really use his bat near the top of the batting order as they push for a spot in the American League wild-card game, and hope for a miracle in the AL East standings.

In the 20 games they've played without Judge entering Friday night, the Yankees had hit a combined .237 with a .316 on-base percentage. They also scored just 4.8 runs per game in that span.

Before Judge was injured, New York had hit .254 with a .331 on-base percentage this season while scoring 5.2 runs per game. Clearly, the Yankees are now missing his presence.

"Obviously you want this to heal," Bell says. "With the nature of the fracture -- just again, go back to the early projection that he'd be back in three weeks -- it just shows you that on the scale of those things, it's relatively minor. But that doesn't mean you can't have little challenges along the way."

Officially, Judge was diagnosed with a chip fracture of the ulnar styloid bone. The ulnar styloid, located at the wrist, is a small bony projection on the tip of the ulna, the forearm bone that runs from the elbow to the medial (inner or pinkie) side of the wrist. The tendons that cross this area, which attach to muscles in the forearm, play an important role in controlling the strength of the wrist and forearm. Other soft tissue structures in the adjacent area contribute to wrist stability.

For a right-handed power hitter like Judge, who has 82 homers in 281 career games, the muscles controlling movement in the wrist area near the right ulnar styloid help generate much of the force necessary to turn hard on pitches at the point of contact. Full range of motion is also critical to a normal swing, which in turn is essential for power.

"There's a lot of torsion that goes through the wrist when you swing the bat," Bell said. "As you go through the motion of swinging, your wrist is kind of bending towards that [ulnar] side. So you're kind of pressing through that side as you swing.

"So if there's any residual swelling or anything that's still pain-sensitive in there, it can make that really hard. It doesn't have to be much. It can just be enough that it changes things, and so the smart thing is to back off [on rehab] because nothing good comes from pressing through it."

That's part of the reason Judge still hasn't swung a bat, although the Yankees had hoped he might Friday. Some soreness built up after throwing in a rehab session before the game and prevented him from taking a few dry swings for the first time. Yankees manager Aaron Boone had said around the time Judge was injured that he might be able to swing within a week of getting hurt.

"We're waiting, again, for [the pain] to be out of there," Boone said late Friday. "Once it is, then we'll go. But we're not going to press it, especially now that we've waited this long. When he starts swinging a bat, you'll know that he's probably getting close and that the pain at the end point is out of there."

Boone told reporters the team would continue to monitor Judge's wrist on a day-by-day basis, not ruling out the possibility that the swings might still come this weekend.

"You want to get him back swinging like he does, and he obviously has such a power swing," Bell says. "So you need him to be able to do it pain-free, or you're just zapping the power right away from him."

Atlanta Braves first baseman Freddie Freeman can attest to that latter point. After suffering his own wrist injury last May, Freeman found it difficult to regularly drive the baseball over the wall when he returned about seven weeks later.

"I can't hit a ball out. They're not going out like they used to," Freeman told the Atlanta Journal-Constitution last August, citing specific balls he hit just after his return that died in the outfield instead of becoming homers the way they might have before his injury. "It is obviously not 100 percent, but it's good enough in my eyes. It's probably about 80-85 percent."

Although Freeman also was hurt by a pitch that hit the wrist on his top swinging hand, his injury was different from Judge's as the nondisplaced fracture required a different recovery path. Still, his return could provide a glimpse into what lies ahead for Judge.

In the weeks after his July 4 return last season, Freeman went on a seven-game hitting streak and maintained his ability to get on base with singles and doubles. But after hitting 14 home runs through the first six weeks of the season, he added another 14 ... over the final three months.

Washington Nationals shortstop Trea Turner, who had his own nondisplaced wrist fracture after getting hit by a pitch last season, found it difficult to maintain his hitting mechanics when he returned last August. The results were still largely there after his comeback, but he wasn't hitting the ball as hard as he had been.

With time in the offseason to further rest and heal their injuries, both Turner and Freeman have had wildly successful 2018 seasons. Turner already has a career-high 14 home runs, and Freeman entered Friday leading the National League in batting average (.320) and hits (150).

In addition to the work Judge put in Friday, throwing with his right hand, he also ran the bases and tracked fly balls and ground balls in the outfield Thursday. He also has made swings underwater recently, without a bat in his hands.

"The stuff underwater is a way of creating some resistance," Bell says. "It's a nice, fluid -- literally fluid -- resistance as opposed to like doing weights or something where you have to incorporate the grip as well. It takes the heavy grip resistance out of it.

"Keep in mind that when you're swinging through the air, a lot of times they're moving so much faster. The water is going to slow you down. So when you turn your hand over, even if you're just going through a random swing, it's really hard to get [an injured player] to control it and slow down. And so you put them in the water, it changes that and that can be beneficial, too."

Regardless of all the rehab mechanisms that might benefit Judge, the Yankees ultimately want his wrist to function just as well as it did before he was hit by that pitch.

"I get really aggravated when people are like, 'Well, they should toughen up and just push through.' It's not a question of that," Bell says. "Sometimes they really are hampered. They will be ineffective. Whenever you have swelling, it's there for a reason. And the wrist is a joint, too. So just like if you have swelling in your knees and you can't run full speed because your muscles around it can't function like they're supposed to, if it's something that's creating irritation around your wrist, you can't function fully.

"Again, we don't know exactly the source of it, but the bottom line is that for functionality, it doesn't matter."