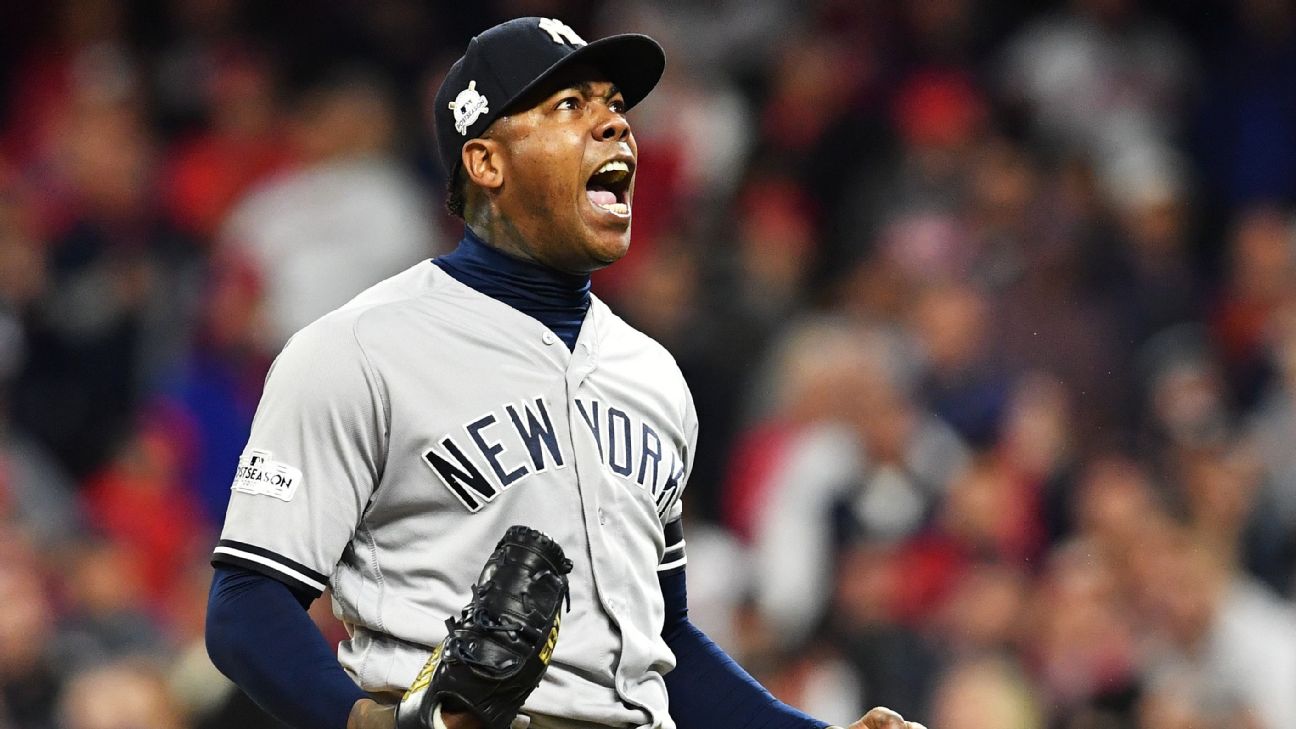 TAMPA, Fla. -- New York Yankees closer Aroldis Chapman says he has recovered from the left knee tendinitis that bothered him during much of last season.

Chapman threw 21 pitches during a four-batter simulated game appearance on Thursday, his 31st birthday. The left-hander struck out three, including Giancarlo Stanton, and induced Gary Sanchez to hit a broken-bat grounder.

Chapman started feeling pain in the knee last May and went on the disabled list from Aug. 22 to Sept. 19.

"I'm healthy and feel really good," Chapman said through a translator. "I felt normal out there. Everything went well."

"It's definitely not ideal to pitch like that, but at the end of the day I need to do my job and help my team," Chapman said. "The good thing about all this is that this is in the past."

Even if Chapman's velocity was slightly lower than normal, the closer still performed well enough that the Yankees had trouble seeing just how limiting the injury was.

"Our question was how much was it affecting him?" manager Aaron Boone said. "Because there was a good amount of time where he had some days that he may have limped off that mound, but he was throwing the ball really well."

An occasional purveyor of social media, whenever Boone pulled out his phone this winter, he saw just how strong Chapman's knee had become.

"I like following him on Instagram," Boone said. "So in the winter, I get to see him bouncing around in his workouts, and to see him now moving around here, he feels really good."

Chapman was joined on the mound by Luis Severino in the simulated game, played in front of about 20 fans on a back field at Steinbrenner Field four hours before a scheduled game against Pittsburgh.

Severino, the expected Opening Day starter March 28 against Baltimore, snagged a hard-hit, one-hopper off the bat of Stanton at his belt.

Severino threw 39 pitchers over two innings, striking out Stanton twice. Sanchez had the lone hit -- a single -- off Severino but also struck out against the right-hander.

Sanchez, coming back from left shoulder surgery on Nov. 8, will play in his first spring training game Friday night. He'll catch, Boone said. Sanchez hit .186 with 18 homers and 53 RBIs in 89 games last year, making two trips to the disabled list because of a right groin strain.

CC Sabathia, 38, is scheduled to throw off a bullpen mound for the first time this year on Friday. The left-hander, who is retiring after the season, had a stent inserted in December after a blockage was found in an artery. He also has had chronic right knee problems that have required several operations.
Report a correction or typo
Related topics:
sportsespnmlbluis severinoaroldis chapmanyankeesnew york yankeescc sabathia
Copyright © 2020 ESPN Internet Ventures. All rights reserved.
More Videos
From CNN Newsource affiliates
TOP STORIES