Yanks' Severino open to pitching out of bullpen 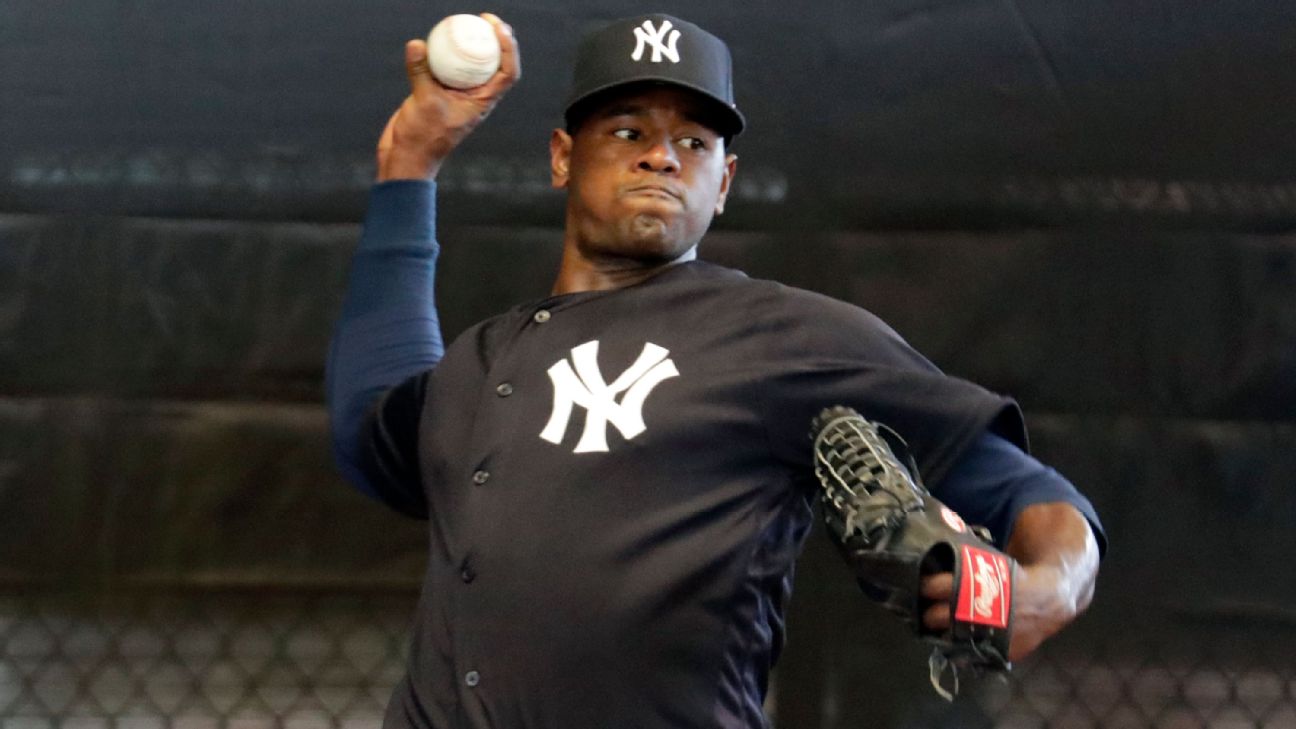 NEW YORK -- Injured New York Yankees starter Luis Severino is so ready to get back on a big league pitcher's mound that he indicated Monday he would be comfortable changing his role, and pitching out of the bullpen, if necessary.

Severino's comments came as speculation started picking up steam in recent days that the Yankees could consider moving him out of the starting rotation once he returns from the right lat strain and shoulder issues that have derailed his season to this point.

The comments also came on the same day Severino resumed a throwing program, playing catch with fellow injured pitcher Dellin Betances, who was also throwing for the first time in this post-setback stage of his own recovery from a right lat strain. When manager Aaron Boone saw both pitchers early in the day, he wished them a "Happy Throwing Day."

In terms of Severino, just three weeks ago the right-hander was shut down for a second time this season after an MRI revealed the injury in the back of his throwing arm wasn't quite 100 percent healed. Just prior to the MRI, however, he had been previously cleared -- without an MRI -- and as a result, was in the middle of a throwing program. At the time, he and the Yankees believed he was finally moving past the arm/back troubles that have nagged him since he was scratched from a March spring training start.

"I'm real confident," Severino said Monday, indicating his belief in the current health of his right latissimus dorsi muscle. "Even the last time when they sent me back, I didn't feel nothing. Maybe they were afraid of something bigger happening. I just know that I feel good."

Yankees general manager Brian Cashman first hinted at the possibility of pitching Severino out of the bullpen on Friday during an interview with "MLB Network Radio" on Sirius XM. The belief is that because he wouldn't be asked to throw upward of 80 pitches on an every-five-day cycle late in his remaining rehab, Severino would have less time to get back to pitching if he was tasked instead with the considerably lighter reliever's workload.

The six weeks Cashman has been anticipating Severino would need in his rehab as a starting pitcher might be reduced by a few days if he's coming out of the bullpen.

"I want to be a starter," Severino said. "[But] if they talk to me and they need me quicker, I would say yes [to being a reliever]."

Boone hesitated to say whether or not the bullpen option was a real one for his ace, who went 19-8 with a 3.39 ERA and 220 strikeouts as a starter last season.

"We want to build him up, and hopefully the process goes smoothly and he gets built up that way," Boone said. "That being said, we'll probably continue to reevaluate him every couple of weeks to see where we're at, and to see what's going to make the most sense."

Earlier in his career, Severino did pitch out of the bullpen. He relieved 11 times in 2016, going 3-0 with a 0.39 ERA. In 23⅓ innings, he had 25 strikeouts. His past two seasons, however, he has been used exclusively a starter.

In addition to Severino's work in the outfield Monday, Betances made 25 throws from about 60 feet as his own throwing program resumed. Since he had previously built himself up to pitching off a mound and throwing to batters, he isn't expected to rehab quite as long as Severino.

Still, the righty reliever isn't trying to place a timeline on his own return. He, too, has had his share of false starts and setbacks after being originally shut down following a string of spring-training appearances. Betances, similarly, has yet to pitch in a big league game this season.

"For me, it's about bouncing back once I start facing hitters," Betances said of the next milestone he wants to reach. "That's what got me last time."
Report a correction or typo
Related topics:
sportsespnmlbluis severinonew york yankeesdellin betances
Copyright © 2021 ESPN Internet Ventures. All rights reserved.
More Videos
From CNN Newsource affiliates
TOP STORIES