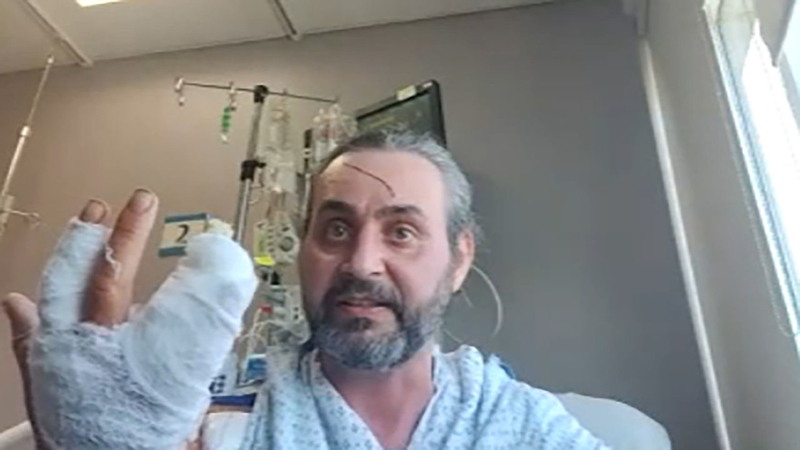 Man stabbed in unprovoked attack in NYC, fights back till help arrives

BENSONHURST, Brooklyn (WABC) -- A man was stabbed in the back, shoulder and side in an unprovoked attack in Brooklyn over the weekend, but the victim fought back and held the suspect down with the help of a neighbor until police arrived.

It happened around 11:30 p.m. Saturday at 62nd Street and Bay Parkway in the Bensonhurst section.

The victim, 43-year-old Albert Yusupov, was loading up his jeep for a trip out of town when the suspect came up from behind and stabbed him more than 10 times.

A struggled ensued, and Yusupov was able to subdue the assailant with the help of a neighbor until police arrived.

"Obviously, I'm going to fight him off, get the knife out of his hand," Yusupov said. "If I let him go, he would have picked that knife up and finished me off."

Gerald Georges was arrested and charged with assault, attempted assault, menacing and harassment.

Yusupov is married with an 8-month-old child, but luckily, his wife Yana and their son were still inside their home and were not attacked.

His wife, however, watched it all unfold after hearing his screams and called 911.

"I was screaming, 'Oh my God, help, help, oh my God,'" she said. "You really love someone and see them hurt and can't do anything. You feel vulnerable, helpless, scared."

He remains hospitalized at Maimonides Medical Center, where he spoke from his hospital bed.

"My lung was filling with blood," he said. "Every breath, I could feel air coming out of my lung."

Authorities say Georges also stabbed his mother in their home nearby just prior to him attacking Yusupov.

She was stabbed in the stomach and slashed across her wrist, but she is expected to survive.

She ended up in the same hospital as Yusupov.

"It brought me to tears," he said. "I just had my first child. Can't imagine my child trying to take my life from me."

Georges reportedly has prior arrests for robbery and assault.

Yusupov's sister has set up a GoFundMe page to help support the family and cover his medical costs.