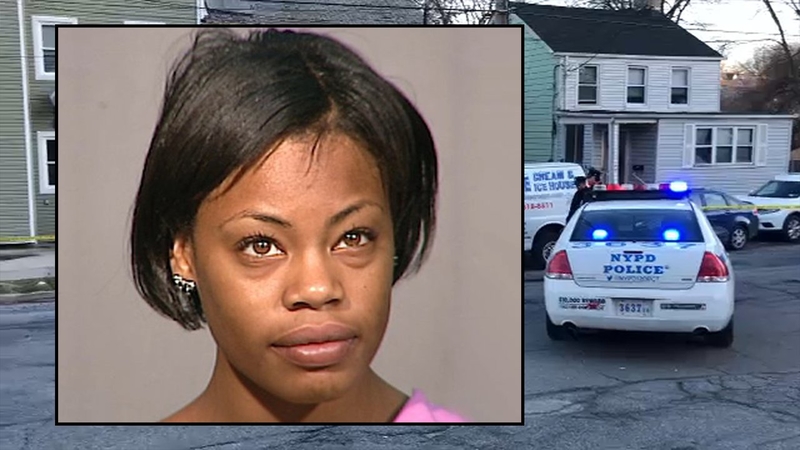 NEW BRIGHTON, Staten Island (WABC) -- Police have identified the suspect in an apparent random double-shooting on Staten Island that happened on Christmas Day.

Investigators say they are looking for 30-year-old Nadia Williams. They say she also uses the alias "Jessica Giles" and has a history of random violence.

Monique Hall and her 19-year-old son Dayvon were shot Christmas Day as they drove in New Brighton in the afternoon. They were hospitalized in stable condition and both are expected to survive, but their family is understandably shaken. As the two were coming back home from shopping for some last-minute items for Christmas dinner on York Avenue, a car raced up behind them and two people started shooting out of the back of the car.
For decades, New Brighton has been home for Irvin Hall, his wife Monique, and twin boys, but the senseless act of violence has since shattered their serenity.

A spray of bullets just narrowly grazed a New Brighton mother and son in a wild car chase on Christmas Day. As the hunt for the shooters continues police believe this to be a case of mistaken identity. Watch the full story on @ABC7NY at 4:30pm. pic.twitter.com/V5sk25GGvj

"She had to speed off and then drive down a one way street the wrong way to try and get away from them," said Irvin.

"It's a sad thing that we've been out here so long that you have to look over your shoulder," he added. "It had to be mistaken identity. My kids don't do any wrong, you know you got some parents that say my kids don't do wrong not knowing, but I know my kids."

Hall's wife, a minister at First Central Baptist Church suffered a graze wound to her lower back, but his son, a high school senior who used to be a part of the 120 Police Explorers Program, now has a bullet lodged behind his esophagus. Irvin says both Dayvon and his mom were given the option of surgery, but doctors did not see any internal bleeding.

"I guess he's going to have to minimize his activities as far as playing basketball and the way he gets around now," Irvin added, "Basketball for him is life. He eats, sleeps and breathes...even when it's cold he wanna go play ball. I'm like 'no, it's too cold out.'"

Irvin hopes that anyone with information into the shooting will come forward.

"Things like this it really needs to stop. I don't understand how you and the end of the day after (Monday) how you were able to go to sleep?" he says, "As a father, I could have lost my wife and my kid in one shot."