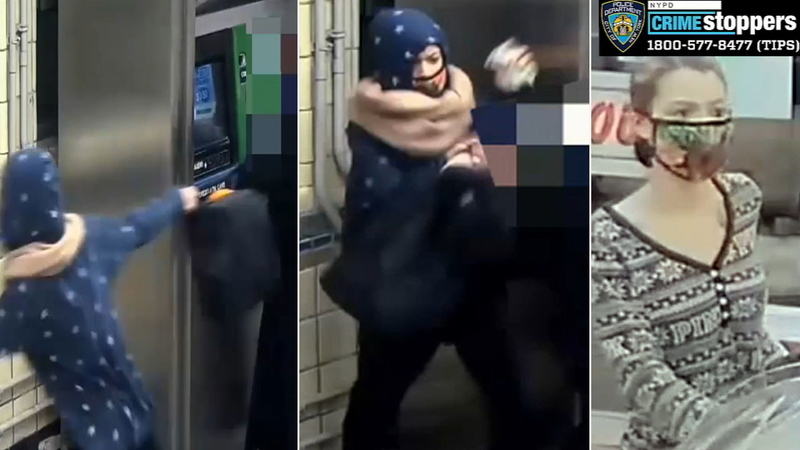 Woman grabbed from behind, attacked at NYC subway station

GRAVESEND, Brooklyn (WABC) -- Police have released video of a violent attack and robbery in a Brooklyn subway station.

The female suspect grabbed the 60-year-old female victim from behind while she was using a MetroCard machine at the 86th Street N station on Sunday.

The video shows the suspect throwing the victim to the ground, punching and kicking the woman repeatedly, and dragging her across the floor as he tries to steal her purse.

Moments later the suspect is seen on another security camera breathing heavily, wearing the same mask, and holding her rolled up blue hoodie in her hand.

Workers at the fried chicken shop two doors down say she came running in, out of breath, and cut more than a dozen customers in line, to demand a plastic bag.

"She come to here and look like she jumping, you know, and asked him for bag. I was here and he take the bag from here to give to her, her hand, and she run," one worker said.

Police said she changed her clothes and used that plastic bag to wrap the clothes she was wearing before fleeing the scene.

The victim held onto her purse but was left with swelling and bruising all over her face and body.

"Our victim held off for dear life and our perpetrator dragged our victim for several seconds right by the turnstile," NYPD Chief of Detectives Rodney Harrison said.

In an Eyewitness News exclusive, Harrison said the assault is just one reason why the NYPD has formed a transit crime squad made up of about 100 detectives.
EMBED More News Videos

"Unfortunately we do see a spike in felony assaults," Harrison said. "Our transit squad is going to investigate these crimes with laser-focused investigations and it's going to be strictly geared towards transit crime incidents."

The victim's daughter says her mother is still too shaken up to come to the door or speak about the attack publicly.

Her daughter did say her mother is a tough woman and will physically be okay, but she is still recovering.

Police are asking for the public's help tracking down that suspect.

Call the NYPD's Crime Stoppers Hotline at 1-800-577-TIPS (8477) or for Spanish, 1-888-57-PISTA (74782). You can also submit tips by visiting the CrimeStoppers website at crimestoppers.nypdonline.org or by messaging on Twitter @NYPDTips.
MORE NEWS: Video shows gas station holdup that ended in gunfire in Bronx
EMBED More News Videos