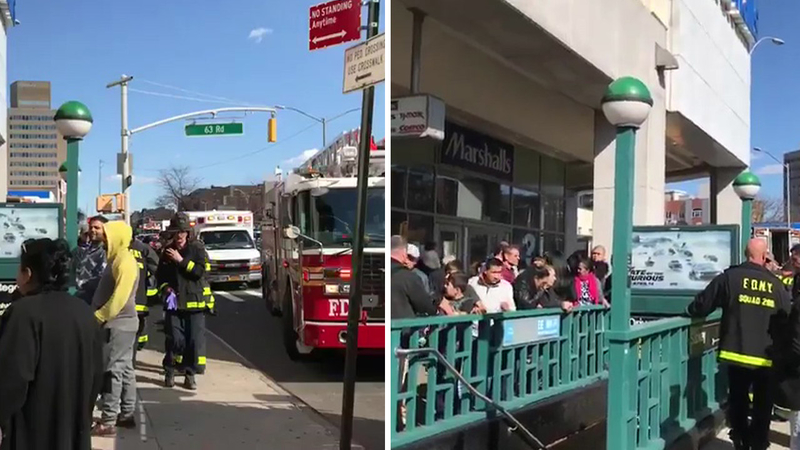 REGO PARK, Queens (WABC) -- A teenager was fatally struck by a subway train after she went on the tracks to retrieve her phone, police say.

Deena Kadribasic, 13, was struck by a southbound R train at the 63rd Drive-Rego Park subway station on 63 Drive and Queens Boulevard Sunday afternoon.

Stephan Topete was headed to work on the train when he felt a jolt. Then came the screams.

"People were trying to push the train, and everybody on the train moved to the side so we could push the weight of the train to the side. We thought the person was actually trapped in between the train," he said.

Still on the train, Topete knew something was terribly wrong. While he and others on the train tried to shift the weight, they eventually asked to be let out to lighten the train. Topete got off to find a crowd of people visibly upset about what they saw.

Investigators tell Eyewitness News that the teen who was hit and killed was on a mission to get her phone. It had fallen on the tracks, she went to get it, but didn't get back to the platform in time.

"Just looking at how far down it is, it doesn't make sense. I know you drop your phone, you want your phone back, but that's a long way down. It's almost four feet," Bernard Malick said.

Witnesses captured the moments when first responders arrived. EMTs rushed the teen to Elmhurst Hospital, but she didn't make it.

At 11, we speak with a man who was on the train when it hit the teen. He explains how dozens tried to push the train &save the girls life pic.twitter.com/iOtxMz9LQ6

Now, eyewitnesses are expressing their condolences, wishing they could have done more to save a life.

"These cellphones are, ya know?" Topete says.