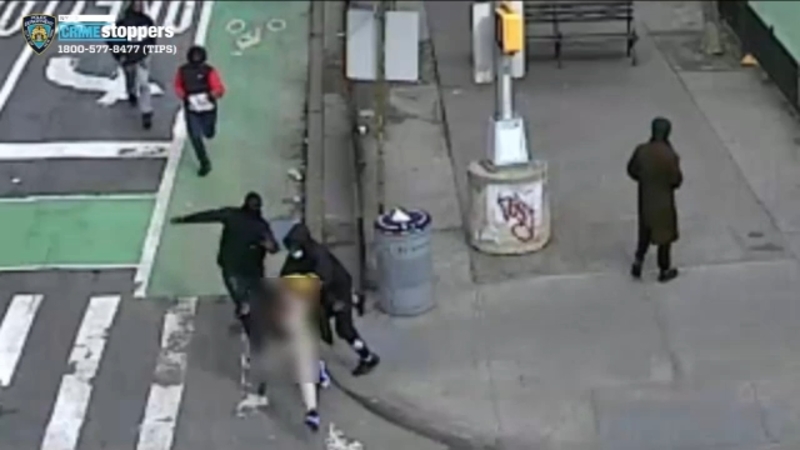 CHINATOWN, Manhattan (WABC) -- Some of the suspects wanted in the beating of a man outside of a bus in Manhattan surrendered to police Friday, but they say they want the charges dropped.

Their attorneys say the guy they beat up is no victim.

"Clearly, there should be no rush to judgment here. This young man is turning himself in. He's a victim, not a perpetrator," attorney Sanford Rubenstein said.

Attorneys for the family of one of the suspects in the attack that happened on Canal Street on January 22 say video of the incident does not tell the whole story.

The attack happened outside the Chinatown bus depot at Canal and Allen Streets around 11:30 a.m.

They say the beatdown was retaliation.

The man getting kicked and punched has been identified as 26-year-old ex-convict Walter Ward who they say had just robbed Jahi Nimmons at gunpoint on the bus.

"And as he was sitting on the bus, he was in fear of his life," Nimmons' attorney Kevin McCall said.

Ward is accused of demanding Nimmons hand over Yeezy sneakers worth more than $1,000, an Apple Watch, other expensive clothes, and two cell phones.

All of it happening during a 14-hour overnight bus ride from Atlanta.

At one point, Nimmons was able to whisper to another passenger to text his grandmother "I got robbed on the bus and they took everything. Don't panic."

"And he told him, if the cops are there in New York, I'm killing you and your whole family. I have your ID right here," his grandmother said.

The attorneys refused to allow Nimmons to answer questions at a briefing Friday.

They say the people turning themselves in were not the ones doing the kicking and punching, but they didn't exactly denounce it either.

"That the mom was screaming out, they robbed my son and people just decided to just jump and they were doing the assaulting because that's called street justice," McCall said.

The group was taken inside the 5th precinct, they were set to be questioned by detectives before heading to court to possibly face charges.

The Manhattan District Attorney did not return a request for comment.