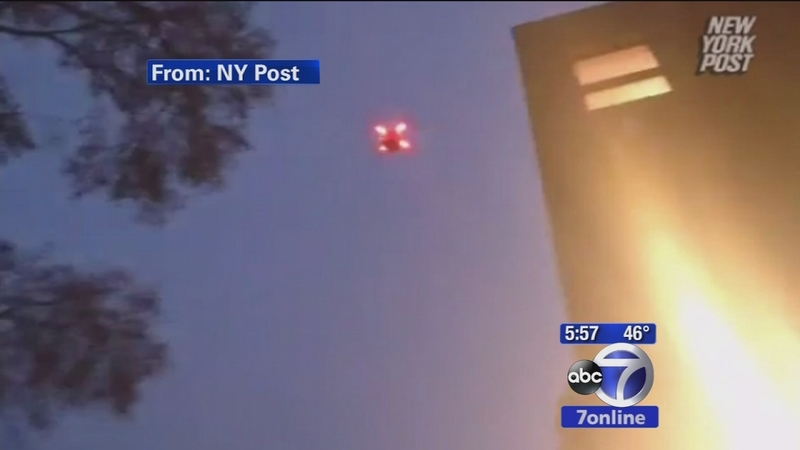 WILLIAMSBURG (WABC) -- Pizza is at your fingertips with a drone, delivering the dish in Brooklyn.

A pizza parlor is testing out the high-tech delivery and is hoping it will take off, but it doesn't come without some glitches.

In the skies above Prospect Heights Thursday night, it's a bird, it's a plane, nope, and it is just Phyllis Brody's pizza.

"I had a gluten-free pizza and it was delicious," Brody said.

The popular pizza chain Williamsburg Pizza completed a short test, in Phyllis' backyard, as it attempts to become the first pizza joint in New York to deliver its pies with a drone.

"It's going to revolutionize the delivery business, make everything a lot faster for customers," said Nino Coniglio, the owner of Williamsburg Pizza.

In a city where pizza rules, Williamsburg Pizza, despite an initial crash Thursday night, believes this kind of business model could be hugely successful.

"It's an exciting event and it is a part of the overall experience of having a piece of pizza," said Charles Walters, CEO of Williamsburg Pizza.

Nearly 100 people have already signed up online for the one of the store's drone package deals, which are pretty pricey as of now. The company's first event is set for Manhattan in the next two weeks. The service isn't immediate; you have to order about seven days in advance.

"Phyllis got her pie and she was very happy, for a woman not really being from this generation and her liking it, then I think everybody really will," Coniglio said.

The federal rules governing commercial drone use remains somewhat of a gray area, so it's unclear if this kind of service will ever fully get off the ground.

"We actually believe that we have constructed a way to do drone delivery on a targeted basis and comply with all local and federal regulations," Walters said.

In the meantime, the folks at Williamsburg Pizza are hoping that the sky really is the limit.