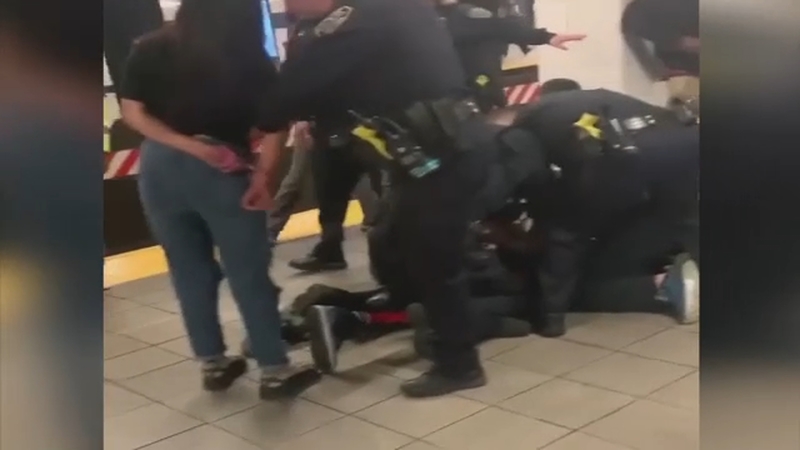 NEW YORK (WABC) -- The 15-year-old punched by a police officer during a melee at a Brooklyn subway station is filing a notice for a lawsuit against the officer and the NYPD.

Video shows the violence that broke out at the Jay Street-Metrotech Station last week.

Officers trying to break up the fight punched Benjamin Marshall in the face.

On Wednesday the teenager and his parents gathered at the law office of attorney Sanford Rubenstein to announce the filing of a $5 million notice of claim against the city.

"He went down to the Jay Street station to retrieve his bag and while he was there he was punched multiple times by one of New York's finest," said Benjamin's father Anthony Noel.

"The only way that we're gonna get change is if those police officers who commit criminal acts are held accountable and put in jail," said Rubenstein. "If that doesn't happen, nothing is gonna change."

Police brass placed the officer, assigned to the 84th Precinct, on non-enforcement duty as the investigation continues.

Because of the pending litigation, Police Commissioner James O'Neill offered few details about the officer's actions, but he did say, "Any violence on a subway platform is especially dangerous. People have a responsibility, a duty, to comply with the police. If there's a fight, and I know it happens with kids, I understand that but when the police come they need to stop and they'll be safe."

Benjamin's mother told reporters her son has never been in trouble before. Victoria Noel said her teenage boy can't sleep, has missed school and is still suffering physically.

"He has a concussion," she said. "He has a wound on his forehead. He has swelling on the temple. And he has a bruise on the back of his neck."