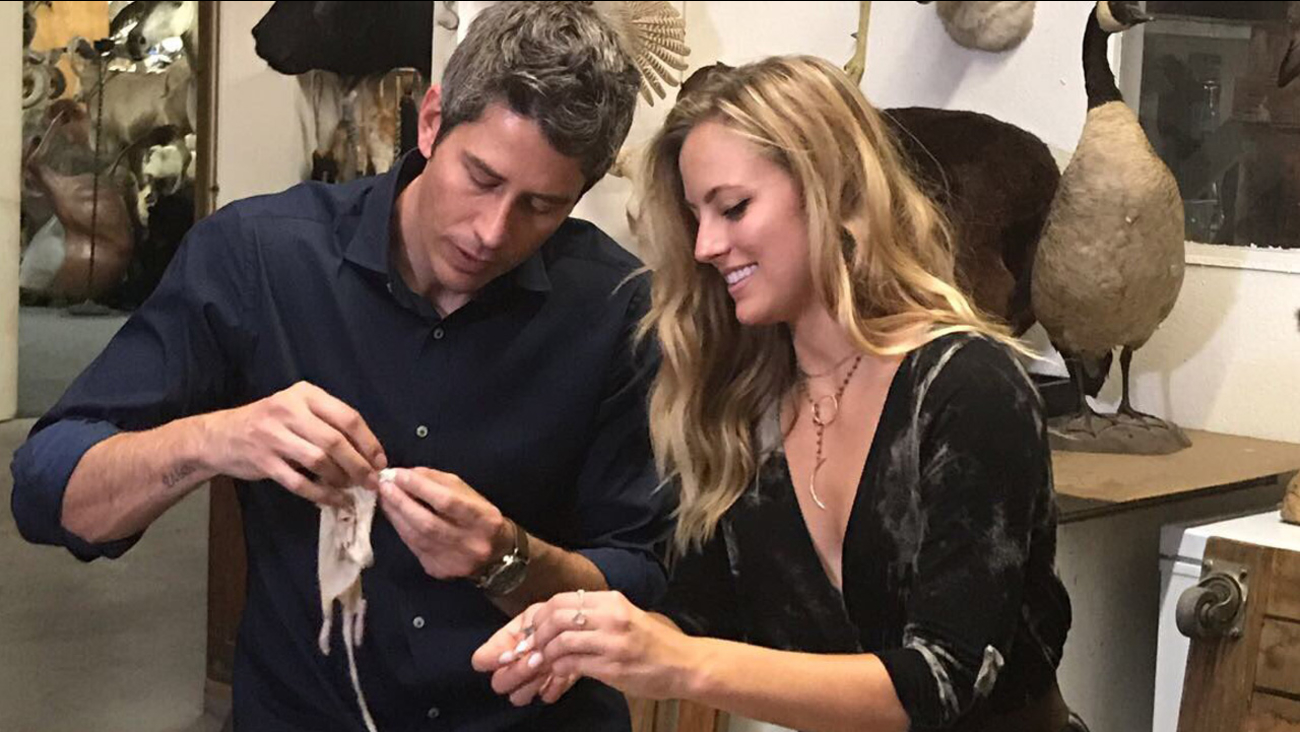 NEW YORK -- It's the one of the best episodes of the season, hometown dates! Arie visited the hometowns of Kendall, Tia, Becca and Lauren. We're down to our final four! Arie drove in a Mercedes to meet up with Kendall in Los Angeles! She wasted no time with taking Arie to a creepy shed where it was filled with taxidermy. Arie was totally creeped out and said it wasn't his thing. He thinks she is really fun and "interesting." Kendall surprised Arie by telling him that they would be mounting their own taxidermy. They started off with some dead white rats. They took the skins and stuffed them, then dressed them and posed them. They were little rat dolls that they put on a puppet play of sorts with - a boy rat and a girl rat on a date in Paris. Arie was very accepting of her odd hobby overall. Kendall told him that when they head to her parents' house later, her twin sister will be a tough cookie to crack. Arie told her that he's falling for her and then they kissed as they sat outside sipping lemonades. Kendall did not say it back however!

That evening, Arie walked into Kendall's family's house with a gigantic flower basket and bouquet in tow. Arie met her parents, sister and brother. As they all sat around the table and told her family about their day, her dad looked on with a disapproving look and said, "Yeah, this is a different type of courtship." Her mom, on the other hand, was very approving of Kendall and Arie and just wants her to be happy. Kendall's sister said that she picked up some "space" between Kendall and Arie. Arie told her that he doesn't know how to feel about that and revealed to her sister that he's falling for Kendall. She asked Arie if he sees himself proposing in the end and he said yes of course. Her sister told her that she doesn't think that this is her "undeniable love." Ouch. Meantime, Arie told her dad that he's falling for Kendall and sees a "great potential." Her dad said that he wouldn't give a blessing unless Kendall thought she was ready for that and if she did, they would support her 100%. Kendall said at this point she's not ready for a proposal, but she might be able to get there by the end. Might. Still, she doesn't want to lose Arie, and at her sister's urging, she told him that she sees herself falling for him too.

Next stop, Weiner, Arkansas! Arie met up with Tia and she took him racing! He was super excited and lit up when he saw the cars. They got fast and furious in Weiner! They talked about how he would be meeting up with her parents, brother, aunt and cousin. She warned him that her brother may give him a bit of a hard time.

Her brother seemed quite tough, but her dad actually seemed really sweet. She comes from a really nice family. Tia cried when she hugged her mom. Aw! They all sat down and talked all about where they had traveled and about how he gave roses to other women. Her brother just stared Arie down. He sat down with Arie first and he told him that he had some questions. He asked him about the rumors of him being "The Kissing Bandit." Arie said that he isn't like that anymore and he's ready to settle down and he really is looking for a wife. He told Tia's brother that he's falling for her and loves her spirit. While talking to her father, Tia said she wanted to know where she stood in comparison to the other ladies. Her dad said that he'd try to figure that out for her. Arie told her dad that he would take care of her and that he's falling for her. Her dad said he would give his blessing if that's what Tia wants. Overall, it seemed like a great talk. Tia confided in her mom about how deep her feelings are for Arie and added that she's learned a lot about herself in the process. As they said goodbye, Tia told Arie that she's "in love" with him. Arie told her that he's had an amazing day and that he won't forget this. He feels like the relationship has really progressed.

Arie's third visit was to Minneapolis to visit Becca. They met up in an apple orchid to pick some apples together. They made some amazingly delicious caramel apples. They sat outside the shed to talk about who she would meet. Arie will meet her mom and Uncle Gary, who is like a father-figure to her ever since her dad died when she was 19, and several others.

That evening, her large family was waiting skeptically to meet Arie. Right off the bat, Gary introduced himself to Arie and he was raring to go. He had a lot of questions for him. They asked him some questions about the difference between being on "The Bachelorette" and "The Bachelor." He said that it's very different, but beautiful, and Gary looked perplexed. He pulled Arie aside for a talk and said that Steve, Becca's dad, was a great guy and a great hunter. He said that he did his funeral, as he's a pastor. He started to cry and said that, "It should be him sitting here, not me." Gary asked Arie straight up, "Are we wasting time here, or is she the real deal to you?" Arie said, "She is." Becca told her mother that she's falling for him, but her mother said she's not ready to give a blessing on a marriage yet. They are a pretty religious family, and Gary asked Arie if he would go to church with Becca and he said he's open to it. During Arie's talk with Becca's mother and told her that he adores her, she'd be a wonderful wife, and that he's falling for her. He asked for Becca's mother's blessing and she said she would honor whatever her choice is because she trusts her daughter. Becca told Arie at the end of the night that she's falling for him and he said that he loved that.

Last but not least, Arie traveled to Lauren in Virginia Beach. They saddled up on some horses and rode along the beach. After that, they climbed a lighthouse to admire the view of the beautiful beach and do some kissing! Arie said that he's very worried about meeting her family because he knows they will be skeptical of their relationship based on what Lauren said during their lunch on the beach.

Arie approached with a giant basket and a bunch of roses, again, and he was freaking out. He was so nervous! Just like their dates, dinner was silent. They barely spoke to him! Her dad asked him some questions though thankfully. Then it turned into 20 questions. It was so awkward! He said his nerves are worse than when he was in the Indy 500! He was sweating bullets! During a mother-daughter chat, Lauren's mom said that she would give them her blessing. Lauren's dad took Arie outside and they talked about his experience in the Navy, and Arie impressed him with the fact that he flew a plane on a Goodwill tour in Iraq. He was so impressed by him and gave him a "cheers" with wine for showing the soldiers and service members appreciation like that. Her dad said that he's not worried about Lauren picking the wrong guy, and said that if Lauren likes him, he likes him. They got along really well. It was actually a really special interaction. During his time with Lauren's mother, Arie revealed that he is still compartmentalizing the relationships and not comparing them and it makes her mother very nervous. She was a tougher critic than the dad! Lauren confidently told her mother that she thinks their relationship could last a lifetime. Lauren cried because she's so deeply in love with Arie.

Back in LA, the ladies returned for the rose ceremony where Arie would choose the three woman he would take on fantasy dates and into the fantasy suites! Arie revealed that he is falling for all of the remaining women. Chris Harrison tried to calm his nerves, but was shocked that Arie didn't really know what he wanted to do. As he walked out to the women, he had a freak out where he had to walk away and try to pull himself together in the hallway. He was still confused so he pulled Kendall aside to talk. He asked her if she felt like she could get engaged in the end and be comfortable with it. She said she wasn't expecting to have that conversation this minute, but she doesn't feel ready just yet, but she isn't ready to say goodbye and she doesn't know what he needs from her. They returned and in the end, Arie gave roses to Becca, Lauren and Kendall. Wow, that meant Tia was going home. Arie cried as Tia did her best to keep it together, but as she approached him, her eyes had tears in them. As they hugged, she let out a sob. Arie walked her out and she asked him right away, "What did I do wrong?" He didn't hesitate a beat as he said, "You didn't do anything wrong!" He looked like he was about to throw up he felt so bad. The poor guy, it's not easy at this stage in the game. Feelings get hurt and there's no way around it.


Coming up on Sunday, it's "The Women Tell All!" Monday, we will get to see the fantasy dates in Peru and learn which women will be Arie's final two! And, an ex-boyfriend shows up! Whose ex is he? We'll have to wait to find out!
Report a correction or typo
Related topics:
arts & entertainmentabcbachelorthe bachelorarie luyendyk jr.cominguproses
Copyright © 2022 WABC-TV. All Rights Reserved.
COMINGUPROSES
Tensions escalate over shrimp among the women on 'The Bachelor'
Will 'The Bachelor' Clayton take a rose back?
After meeting 'The Bachelor' Clayton, one woman says she 'hates' him
Michelle hands out her final rose on 'The Bachelorette,' gets engaged
TOP STORIES
Winter Storm Update: Tracking the nor'easter
Tri-State urged to prepare for snow, wind as nor'easter approaches
Final farewell today for NYPD Officer Jason Rivera
Family, friends of NYPD officer Jason Rivera honor him with 2-mile run
Exclusive: Hate crime victim speaks out after attack in NYC
AccuWeather Alert: Nor'easter to bring heavy snow
COVID Updates: Kids 5-11 need to be fully vaxxed for NYC indoor venues
Show More
Parents livid after 9-year-old girl left locked outside school in cold
Holocaust letter detailing family's death found at NY flea market
Missing NJ mom, 2 young kids found safe, won't be returning home
Mayor Eric Adams vows change amid surge of NYC violence
Car hits NYC restaurant, which is burglarized the next night
More TOP STORIES News