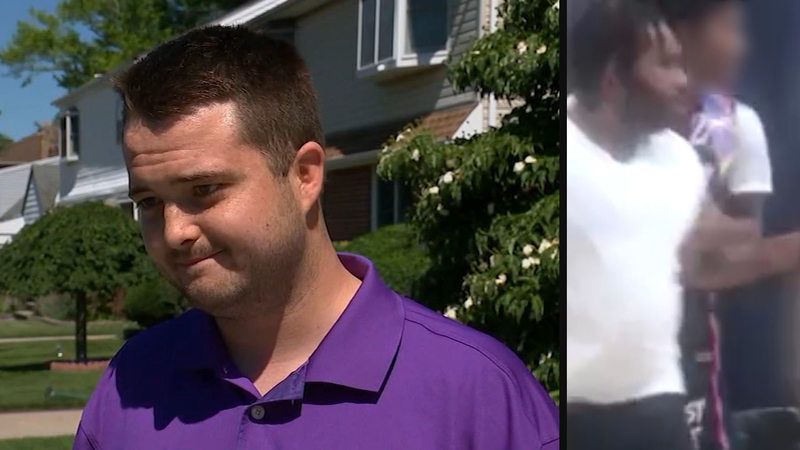 HUNTINGTON STATION, Long Island (WABC) -- A basketball coach on Long Island who said he was attacked by family members of one of his players during a game is speaking out about the harrowing ordeal, in a story first broadcast on Eyewitness News.

Theo Czubakowski said he was coaching a game on Sunday at Next Level Sports Center in Huntington Station when a mother of one of his players got upset at him for benching her son.

"His mother, after about five or six minutes and we're going down by 20, now she's yelling at me, 'Put him in the game,'" Czubakowski recounted to Eyewitness News reporter Kristin Thorne. "And then she starts cursing."

Czubakowski said he told the mother to calm down, and if she didn't, she would have to leave.

"Then, she walks towards the court," Czubakowski said.

Czubakowski shared cell phone video with Eyewitness News from a spectator in the stands, which shows a crowd of people surround Czubakowski.

Suffolk County Police said they are using the video as part of the investigation.

Czubakowski said one man, a relative of the player who was benched, was the first one to punch him in the right side of the head.
"I fell on the floor," he said. "I was just totally out of it."

Czubakowski said that's when more men punched and kicked him in the head. He said he did not defend himself because he was too stunned.

The cell phone video shows Czubakowski stumbling to run out of the gym.

"They chased me out," he said. "I got to my car. I was in my car trying to close the door. They got me in my car, they were beating me up in my car and then they were trying to pull me out of my car by my feet, so I grabbed the steering wheel trying to hold and pull myself back into the car."

Czubakowski said one of his players was able to close the car door, and Czubakowski drove away. He later came back and called police.

He was transported to Huntington Hospital and said he suffered a concussion, and that some of his injuries will require dental work from contusions to his jaw.

"It's not his fault," Czubakowski said. "He was trying to hold them back."

Czubakowski founded the Ghost Elite basketball league in 2014 to provide kids with financial hardships an opportunity to play basketball. He has hosted clinics and tournaments throughout Long Island, and he currently coaches four teams.

"It kills me thinking I'm trying to help people and then, you know, this happens," he said.

Czubakowski said he was forced to remove this particular player from his team because he cannot risk the men involved showing up to a game again.

Suffolk Police put out a picture of at least one of the men who was allegedly involved.

Anyone with information is asked to call Suffolk County Crime Stoppers at 1-800-220-TIPS.