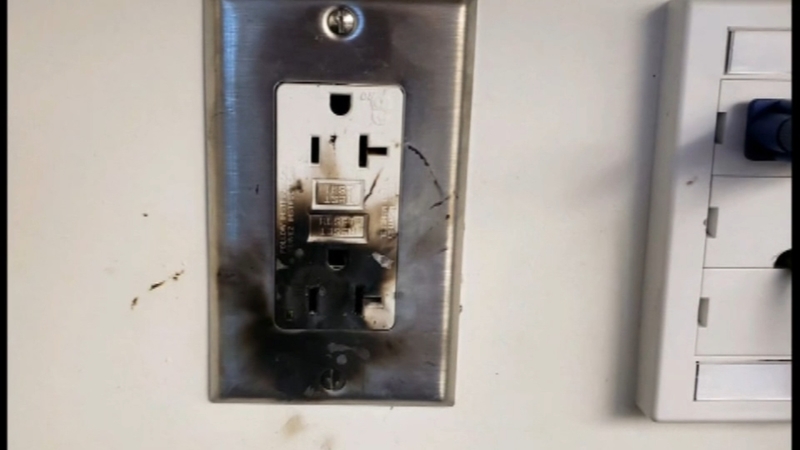 BOSTON -- A top fire official is warning parents and children about a new viral challenge.

The so-called "outlet challenge" involves partially plugging a phone charger into an outlet and then touching a penny to the exposed prongs, according to Massachusetts State Fire Marshal Peter Ostroskey.

Obviously, that is unsafe -- potentially causing a spark that could lead to a fire.

"It doesn't take much to be electrocuted, fatally electrocuted just by an outlet in a wall socket," Plymouth, Massachusetts, Fire Chief Ed Bradley said to WBZ.

Bradley's department was called to a local high school Tuesday to investigate a scorched and burned wall outlet. Turns out, two students participating in the outlet challenge were to blame.

It's at least the second public investigation in Massachusetts into outlet challenge fires.

"The electricity propels the charger and the coin--now the coin is molten metal at this point--outwards. It could easily get you in the face, get you in the eye. It could cause blindness and it could cause your clothing to catch on fire," Bradley said. "The other issue can be that you do damage to some electrical wiring behind the wall and a fire could be undetected and burning in the walls, endangering everyone in the building."
Report a correction or typo
Related topics:
electricelectrocutionfire safetyelectric shock
Copyright © 2021 WABC-TV. All Rights Reserved.
TOP STORIES
Chris Cuomo was accused of harassment days before CNN firing
Bob Dole, longtime public servant and WWII veteran, dies
Tri-State omicron case count up to 10 as hospitals strain
COVID outbreak on cruise ship approaching New Orleans
Man killed, 2 others injured in parking lot shooting on Long Island
Parents knowingly sent child with COVID to class, prompting quarantine
Hotel employee dies after falling out window
Show More
Dunkin' customer surprises beloved employee with new home
Pilgrimage marks 1-year anniversary of East Village church fire
Dancing Grannies make 1st public appearance since parade tragedy
Crumbley parents plead not guilty to Oxford school shooting charges
Homeowner told to take down 'Christmas Vacation' display or face fines
More TOP STORIES News