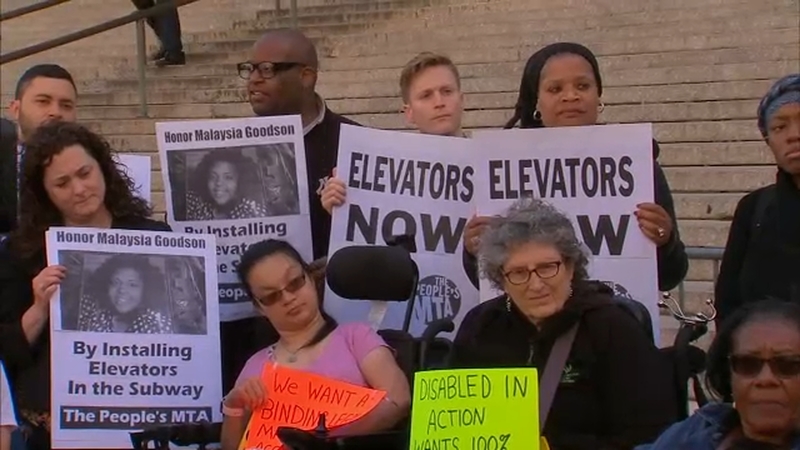 NEW YORK (WABC) -- There was a strong warning, but no ruling Tuesday in a class action lawsuit filed against the MTA over the lack of elevators in the subway system.

The judge ruled to delay a decision on the lawsuit, but made it clear he believes the agency should make transportation accessible to all.

Individuals and four different organizations have been suing the MTA over the lack of working elevators in the subway system.

Advocates say three quarters New York subway stops are not usable if you use a wheelchair. Only one in four stations have elevators, and they don't always work.

Advocates say it's a real hardship for those in wheelchairs, parents with strollers, people with luggage and others.

The lawsuit, which has been before the courts since 2017, says the MTA's lack of compliance violates the law.

The MTA says money issues have prevented its from complying with requirements for full accessibility.

"This is a class action lawsuit, and it's clear that this impacts hundreds of thousands of people with disabilities, including myself," said attorney Emily Seelenfreund. "I want to take the subway, too."

"My favorite part was when the judge was, like, 'You don't even know what it took for them to just get here,'" said advocate Jessica Delarosa. "That made me feel like he understood, that he had an understanding of how hard it is for us, I mean, to even get here today. So that gave me hope."

The MTA says its Fast Forward Plan will add elevators to 50 stations within five years, bringing the total number of accessible stations to 168 - still only 35 percent of the total stations in the system.

Advocates say that's not sufficient. They are eagerly awaiting the judge's ruling, which is now expected on June 5th.