Patient dies in crash between ambulance and fire truck in Brooklyn 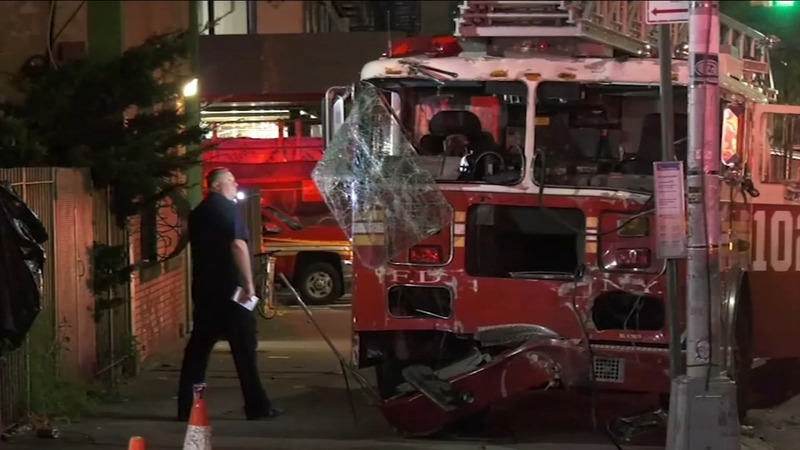 BEDFORD-STUYVESANT, Brooklyn (WABC) -- An ambulance racing a heart attack patient to the hospital collided with a fire truck en route to a fire in Bedford-Stuyvesant, Brooklyn, leaving the patient dead and a family member seriously injured.

The fire truck, Ladder 102, T-boned the ambulance at the intersection of Myrtle Avenue And Throop Avenue just after 12:45 a.m. Thursday.

The heart attack patient, 59-year-old Jamil Almansouri, known to friends as Mike, was being rushed to Woodhull Hospital at the time of the crash. He was pronounced dead.

NOW: investigation underway into a tragic crash involving a fire truck and an ambulance — both responding to emergencies in Bed-Stuy. A heart attack victim in the back of the ambulance is dead. Live updates from the scene on your TV. #abc7NY pic.twitter.com/COwieL5tZH

"He was the greatest," the victim's brother, Abdullah Ahmad, said. "Everybody loved him. He was a good-hearted person. He didn't bother nobody."

Ahmad tells Eyewitness News that Almansouri owned a bodega not far from the crash scene.

"I just I don't know what to do," he said. "I was just with him earlier today. He was fine, went to the doctor about his sugar, and they were saying everything was fine with him."

Almansouri's sister, who was in the ambulance with him, was seriously hurt.

"My brother-in-law, who is married to my sister, he's the one who called me," Ahmad said. "He was trying to call his wife many times, and she didn't answer. And he has GPS on his phone for his wife, so he tracked the phone and he came over here."

Eight first responders were also hurt in the collision.

Watch raw video from the scene of a deadly crash involving an FDNY ambulance and fire truck.

Two EMTs in the ambulance were taken to Bellevue Hospital, one with a leg injury and the other complaining of pain.

Six firefighters were taken to Bellevue Hospital, though none of their injuries were believed to be serious.

The victim’s brother is consoled at the scene. He told me he couldn’t believe his brother died and had to see it for himself. Very sad. #abc7NY pic.twitter.com/XLeN6RLW8O

Both emergency vehicles had their lights activated at the time of the crash.