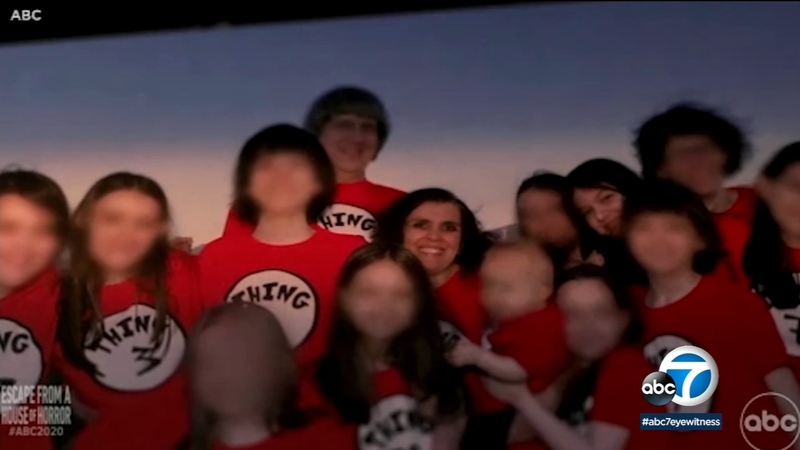 PERRIS, Calif. -- The top elected official in Riverside County, California, said Tuesday that she was appalled by the abuse endured by the 13 Turpin children over the years, stressing that the county is determined to investigate allegations that the siblings continued to be mistreated after they were placed under the county's care nearly four years ago.

Karen Spiegel, chairwoman of the Riverside Board of Supervisors, offered her first public comments since the plight of many of the Turpin children was detailed during ABC's "20/20" Diane Sawyer special event, "Escape From A House Of Horror," which aired on Nov. 19.

"I, like many of you, watched the recent '20/20' special on the Turpin children. The reaction for most of us was horror, disgust. What happened to those children during that time was something none of us would want ourselves or our children to ever live through," said Karen Spiegel, chairwoman of the Riverside County Board of Supervisors, during a public meeting.

Diane Sawyer shares a never-before-seen look at body camera video revealing Jordan Turpin's encounter with a deputy the morning she escaped imprisonment by her parents.

Spiegel underscored that the county remains committed to supporting its independent investigation of the Riverside County care of the Turpin children, as well as that of all the vulnerable children and adults in the county's care.

"It's of utmost importance to complete a full and independent evaluation of our county systems, and in the way that we provide care and deliver services," Spiegel said.

In 2018, the Turpin children escaped from their Riverside County home, where they were subjected to violence and deprived of food, sleep, hygiene, education and health care at the hands of their parents.

An ABC investigation explored allegations that the county's social services systems, for dependent children and adults, had failed the Turpin children, then aged 2 to 29, following their rescue.

Many of the siblings were still "living in squalor," Mike Hestrin, the Riverside County District Attorney, told ABC News this summer.

"That is unimaginable to me -- that we could have the very worst case of child abuse that I've ever seen, and then that we would then not be able to get it together to give them basic needs," Hestrin told Sawyer.

Despite an initial outpouring of support in the weeks after their parents' 2018 arrest, some of the Turpin siblings and their advocates told ABC News that the siblings are still struggling to access basic living necessities, including food and housing.

"Right now, I don't really have a way to get food right now," Jordan Turpin, 21, told Sawyer at the time of the interview in July.

A former deputy public guardian says she will cooperate with Riverside County's investigation into the alleged mistreatment the 13 Turpin children, who were held captive and tortured inside their Perris home for years, experienced after they were rescued.

However, at Tuesday's meeting, Spiegel suggested there was "always more to a story."

"Like many things we see on the media and the internet, I also had to step back and caution myself not to make total judgment from some of the facts. There's always more to a story. And sometimes you get what they want you to hear, and only that, nothing with the backup," Spiegel said.

When approached by ABC News about the allegations after a Nov. 9 meeting of the county's Board of Supervisors, Spiegel declined to discuss specifics about what has transpired with the Turpin children since they were rescued.

"Well I am not -- I don't have the information you're looking for," Spiegel told ABC News at the county meeting last month. "We're still in investigation stages, so I don't have anything to share with you."

The accusations ultimately prompted the county to initiate an independent probe into the care of the Turpin siblings, as well as that of other vulnerable children and adults, who are all under the supervision of the court.

In late October, the county appointed former U.S. District Judge Stephen G. Larson to lead the investigation, which is set to be completed by March 31, 2022.

Jennifer and Jordan Turpin describe, in an exclusive interview with Diane Sawyer, when they realized for the first time that their imprisonment by their parents was over.

Larson served nearly 10 years on the bench in California, including three years in district court after being appointed by George W. Bush in 2006, according to his biography.

"My firm and I are fully committed to conducting a thorough and transparent examination of these matters, as expected by this board, and the residents and citizens of Riverside County," Larson told the supervisors during an introductory presentation on Tuesday.

The law firm's investigation has two primary objectives, according to Larson.

The first is "identifying and scrutinizing" the services provided to 13 siblings while under the care and supervision of the county. The second is to assess the quality of the Riverside County services for all children in foster care and dependent adults.

"We have to care about all of our children," Spiegel said.

Larson commended the county for initiating the investigation, telling the board that "the fact that the county promptly sought an independent review and that you are demanding swift and meaningful action underscores for me in this county, your commitment to addressing these critical issues directly, openly and effectively."

Larson reported that his team has "complete autonomy to pursue all relevant lines of inquiry to answer the critical questions that our investigation will uncover."

"I want you to know that the board stands ready to provide the full resources and not to leave a stone unturned," Spiegel said, adding that she expects Larson to act as a neutral party in the investigation.

During the meeting on Tuesday, the board also approved the creation of an ad-hoc committee to assess inter-departmental systems improvement for the protection of vulnerable children and adults.

According to a county representative, the committee will receive regular status reports and updates from Larson LLP, ensure full and complete access to any and all relevant information to support the inquiry, and make recommendations to the full Board of Supervisors regarding policy directives, systems changes and service delivery improvements.