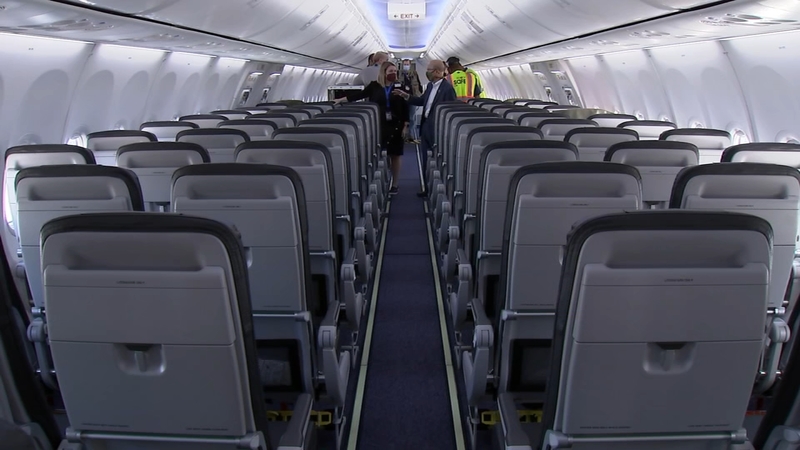 LAFAYETTE, Calif. -- There has been a big spike in airfares this travel season. Experts blame high fuel prices, a shortage of planes and pilots, and a surge in tourism. Prices on some routes have doubled since 2019.

Karen Ward and her husband Michael of Lafayette, California, were very glad they booked their flight to Italy last year when prices were still low.

The only problem? Their flight just got canceled. And their low fare is gone.

The airline said that due to a shortage of aircraft, the Wards' flight to Italy was canceled. The couple had to call and rebook. But now? The flight they booked last year now cost $4,000 more.

SEE ALSO | Traveling this summer? Vacation packages, flights are more expensive; how to save money

After staying home the past two years, the Wards had decided to splurge on a trip to Italy.

"Our 40th wedding anniversary is this month and we decided to rent a villa in Tuscany for a month," Karen Ward said.

Ward booked a flight last September on United Airlines in business class from San Francisco to Frankfurt to Florence, leaving next month. The fare was $7,600 for two tickets.

"We've never flown business before. So we splurged on business, because it's our anniversary," Ward said.

The Wards got their confirmation and booked the villa, but eight months later, received a shock.

"Saturday, I get this email saying, 'Your flight's been canceled,'" Ward said.

The notice said their aircraft was no longer available, and that they should call to re-book.

"I was on the phone with her for three and a half hours," Ward explained.

An agent booked two more tickets at the same price -- but later, Ward saw they were now seated in "economy" class.

She called back demanding her business class seats.

She contacted our sister station KGO-TV in San Francisco. As it turns out, if an airline cancels your flight, you are entitled to a cash refund. Experts say airlines try to avoid that by offering a good deal.

"Because you are entitled to a full cash refund, the airline typically would prefer that you keep your money with them and take an alternative option," said Scott Keyes of Scott's Cheap Flights. "You can actually request to be on an improved flight."

Indeed, when Ward called United again, the airline agreed to give her those business class seats for the same price after all.

United told our sister station: "We work diligently to find customers a suitable alternative if their travel is impacted by a schedule change..."

United said it gives notice as far ahead as possible so customers can choose between a refund, rescheduling or credit for a future flight.

"My husband and I are thrilled and eternally grateful for your help," Ward said.

Travel experts say airlines are dealing with a shortage of aircraft and pilots since travel slowed way down in the pandemic. Flight cancelations or changing routes may be more frequent than in the past.

Read United Airlines' full statement below:
Advanced schedule changes are not unique to any one airline; they exist across all carriers for a variety of reasons, including aircraft availability, crew and vendor staffing and other market-related challenges.

At United, we work diligently to find customers a suitable alternative if their travel is impacted by a schedule change. We also try to input schedule changes as far in advance as possible, so that customers can make an informed decision on what might work best for them - accepting a refund, re-scheduling, or canceling for future flight credit free of change fees.

We have the following advice for any United customers whose travel plans are impacted by a schedule change:

We offer the option to self-serve via the United app or united.com in the event of schedule changes and we also provide customer contact center support available via phone, web chat, mobile app messaging, Facebook private message and Twitter direct message. We recommend reaching out to us so we can assist with re-booking or discussing alternative options.

Take a look at more stories and videos by Michael Finney and 7 On Your Side.

Have a question for Michael and the 7 On Your Side team? Fill out the form HERE!
7OYS's consumer hotline is a free consumer mediation service for those in the San Francisco Bay Area. We assist individuals with consumer-related issues; we cannot assist on cases between businesses, or cases involving family law, criminal matters, landlord/tenant disputes, labor issues, or medical issues. Please review our FAQ here. As a part of our process in assisting you, it is necessary that we contact the company / agency you are writing about. If you do not wish us to contact them, please let us know right away, as it will affect our ability to work on your case. Due to the high volume of emails we receive, please allow 3-5 business days for a response.
Report a correction or typo
Related topics:
travelcaliforniasummervacationtravelair travelairline industryairline7 on your sideconsumerconsumer concerns
Copyright © 2022 WABC-TV. All Rights Reserved.
RELATED
Airfares are sky-high - will they come back down?
How rising COVID cases are impacting travel, weddings and work
Airlines are slashing flights due to staffing shortage
Delta hiking fares to turn profit as fuel costs surge
AIR TRAVEL
Travel trouble with flights, gas prices continues this 4th of July
Delta pilots picketing at JFK, airports nationwide in contract push
'Alarmingly large volume' of guns seized at Newark Airport: TSA
United Airlines cutting flights from Newark airport
TOP STORIES
3 dead, 24 wounded in July 4, overnight shootings across NYC
Woman hit in the face with firework in NJ, has severe eye injury
Homeless man fatally stabbed while sleeping in West Village park: NYPD
Costco begins limiting gas sales to members only in NJ
LIVE UPDATE: Parade shooting leaves 6 dead, 30 hurt; man detained
What we know about the victims of the July 4th parade shooting
Highland Park 4th of July parade shooting survivors speak out
Show More
Fire outside Long Island mosque investigated as possible hate crime
AccuWeather: Humidity ticks up, late storms Tuesday
11-year-old boy dies from fireworks
Memorial Mass marks 5 years since NYPD Officer Familia killed in Bronx
Alternate Side Parking returns to pre-pandemic enforcement
More TOP STORIES News