St. Francis linebacker comes out as gay despite fears of backlash, gets no backlash at all 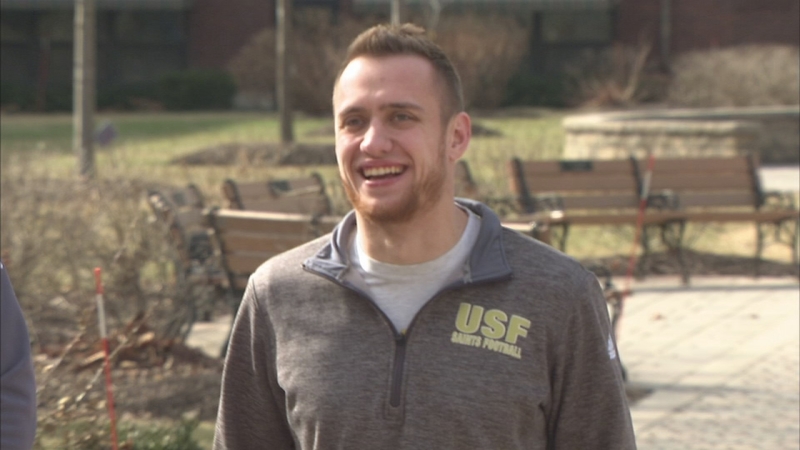 JOLIET, Illinois -- Since its inception, those who play football, and perhaps those who watch it, have adhered to an unwritten code of conduct that has excluded men who were gay. But as society has changed, so too has the backlash that has been used to keep gay athletes who had a passion to play the sport from playing.

Here is the story of one member of the University of St. Francis football team, perhaps the first scholarship athlete who decided to end the charade while he was still competing at the collegiate level.

Linebacker Kyle Kurdziolek, No. 29 on the University of St. Francis football team, is passionate about playing football, but for years he hid a secret so he could participate in what some consider to be the most macho of team sports.

That secret was eating him up, going back to his childhood.

"Growing up in Streator, you know, it was a very small time, a very small-minded town, so I didn't feel welcome at first there just-because I knew who I was as a person around middle school. And as soon as that hit me and just being around a lot of my friends, a lot of their parents, it wasn't a mentality or attitude that was really accepted at the time, and I didn't feel comfortable in my own shoes," he said.

In May 2016, he told a coworker at a Joliet clothing store that he was gay. In August he started to tell some of his teammates. Among them was Alex Zlomie, a defensive end who turned out to be one of his best friends.

"We were hanging out over summer and we were going to a concert in Joliet and we were just walking in and he was like, 'Hey, I wanted to let you know I'm gay,' and I didn't even break stride, I was like, OK," Zlomie recalled.

The next step was informing his coach, Joe Curry.

"I was completely 100 percent happy for him. You know, everybody in their life desires to be part of something and be happy, and Kyle's no different," Curry said.

St. Francis is a Catholic university and the religion frowns upon homosexuality, which makes one wonder if there has been any backlash to Kurdziolek coming out while being on scholarship.

"No, not one bit. Not one bit. It's been 100 percent totally positive and I think that says something about our university and our program here. We're a welcoming university that welcomes everybody, and Kyle's no different," Curry said

"I feel so relieved now, like, I'm so happy about the person I am today, just being able to get that off my chest and feel comfortable about who I am. I don't have to hide behind this mask anymore, I don't have to conform to some norm anymore. I can be Kyle Kurdziolek, I can be who I want to be and without no restrictions," he said.

Kurdziolek said his inspiration for coming out was Michael Sam, but the difference is Sam waited until he was done with college ball to come out while Kurdziolek has two years of eligibility left.

He hopes that his experience coming out as a gay scholarship college football player may help inspire other athletes who feel as he does, and he is using social media to help inspire others like him to eliminate the fear and anxiety that society places on those who are part of the LGBT community, and that leads to depression. He is a courageous young man in the world of our most violent team sport.
Related topics:
sportsjolietgay athletelgbtcollege football
Copyright © 2022 WLS-TV. All Rights Reserved.
TOP STORIES
Thunderstorm watches in effect as severe weather hits
AccuWeather Alert: Gusty storms
11-year-old girl severely hurt after being shot in stomach in NYC
NYC expected to elevate to 'high' COVID alert level in coming days
'Be very afraid': Mayor warns of potential Supreme Court gun ruling
LIVE | The Countdown
Elementary student brings loaded gun to school in NJ
Show More
9-year-old NYC girl's death ruled a homicide, mother to be charged
Family of Buffalo victim with NJ ties to seek legal action
Alleged gunman in Buffalo shooting asked to leave store day before
Police: Buffalo gunman had plans to keep killing if he got away
What is white replacement theory? Belief fueling racist attacks
More TOP STORIES News