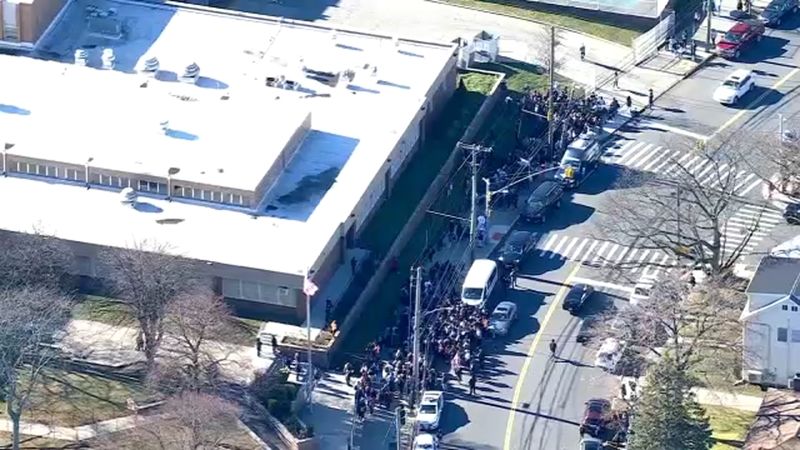 STATEN ISLAND (WABC) -- Students at a high school on Staten Island held a walkout Monday over what they call ongoing incidents of violence.

Close to 1,000 students at Susan E. Wagner High School walked out of their classes and onto the football field at 11:40 a.m.

Students say the violence is particularly bad once school is over, and a recently knife fight caught on video is just one incident of violence that took place inside of the school.

Another student has opted to take lessons virtually after being pushed down a flight of stairs.

Some parents came to show their support for the students and all are calling for metal detectors on campus.

"We're just out here to raise awareness," one student said. "Because I think it's stupid how we have to feel unsafe in school where we're just suppose to learn."

Just as students were staging their walkout, a shelter in place went into effect at the school due to threats made via Snapchat towards a student, according to a school official.

The shelter in place was called while school officials worked to confirm the messages were not a threat to any students.

Once the shelter in place was over, the students were permitted to continue with their scheduled walk out.

"There are threats happening, and we still have school, nobody did anything," another student said. "There was a stabbing, and we still had school during the stabbing. There's just a lot going on that makes me feel very unsafe in the environment this school has created."

Officials from the Department of Education say they are working on reducing violent incidents at all schools and are listening to student concerns.

"Safety is our paramount priority, and violent incidents are down 18 percent in schools this year because of our work to make communities safe and supportive for all students," an education department official said. "Student voice and engagement is so important, and Wagner High School's leadership is comprehensively addressing concerns in partnership with the School Safety Division and NYPD."

Earlier this month, on December 6 at 3 p.m., authorities say two people approached a 16-year-old boy near the football field and struck him in the head with a gun.

The victim suffered bruising and swelling to the left side of his head and face and was removed by EMS to Northwell Health Staten Island University Hospital North in stable condition.

The individuals also punched a 19-year-old man in the face, police said.

EMS treated that victim on scene for bruising and swelling to the left eye.

The first attacker was described as a male with a dark complexion who was last seen wearing a blue hooded sweatshirt, blue sweatpants and multicolored sneakers.

The second attacker was described as a male with a dark complexion who was last seen wearing a red du-rag, black hooded sweatshirt and gray pants.