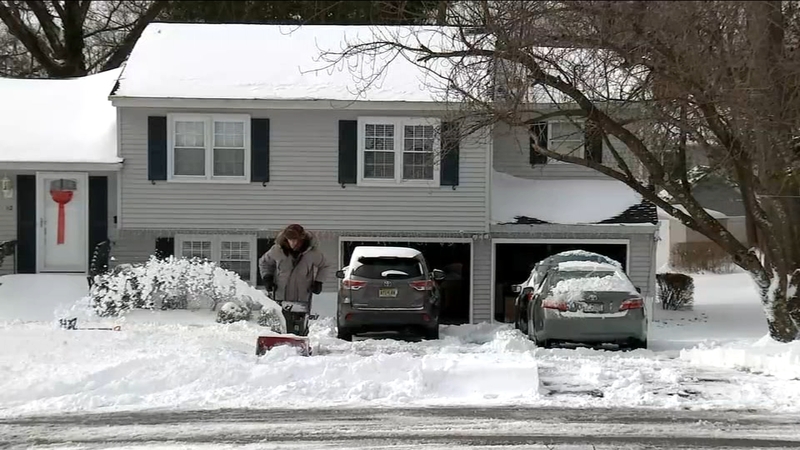 NEW JERSEY (WABC) -- New Jersey is under a state of emergency as several inches of snow fell Wednesday and into the early morning hours on Thursday. Snowplows were out in full force with a cleanup effort.

The state of emergency was set to expire at 10 a.m., except in Passaic, Bergen, Essex, Union, and Hudson counties where it will continue until 1 p.m.

"Whatever melts may refreeze overnight, so we want everyone to be cautious when venturing out," Governor Phil Murphy said on Thursday morning. "We're moving out of this, but we're not out of it yet so please be careful."

In addition to the heavy snow, the storm brought strong winds of 30 to 40 mph inland, and 50 mph gales along the shore. It did also cause power outages, mostly along the shore towns.

The wind whipped so hard, it could make you stop in your tracks.

2nd observation... the whipping wind makes your face sting real good. Feels like needles pricking you in the face. And that’s with a mask on. pic.twitter.com/wqRtRqisVr

These winds lead to blowing snow in the northern part of the state, driving winds, and sleet.

Vehicles got stuck left and right. It didn't matter if it was an SUV or sedan, an incline or flat road.

This was in Fort Lee, NJ... pic.twitter.com/sJK7OeIaKJ

Over in Palisades Park, and pretty much everywhere in New Jersey, vehicles could be found pulled over or stuck.

This used to be a pretty busy road in Palisades Park, NJ. Looking like a ski slope. About 4 hours after snow started. pic.twitter.com/ndrCfBqE65

By the morning, 270 accidents and 426 motorist aid calls had been reported by NJ State Police. Murphy noted that local police departments likely handled several more calls and accidents as well.

"A commercial vehicle restriction, which includes tractor-trailers, empty straight CDL weighted trucks, any passenger vehicles towing trailers, motorcycles, rec vehicles, including boats, is in place along our interstate parkways," Murphy said. The restriction "does not apply to the turnpike, the Parkway up to exit 105 or the Atlantic City Expressway."

The restriction will remain in place until 11 a.m.

Many schools opted for a snow day throughout the state, with students logging on to do some remote learning.

Murphy said the storm disrupted some deliveries of the COVID-19 vaccine, but it will still get to hospitals.

"I think it is fair to say this storm did disrupt some amount of the delivery of the vaccine, but I believe that is a disruption that will be measured as a delay in getting there, rather than a binary, 'it was going to get there and now it is not,'" Murphy said.

Murphy said he was "not aware of any place that was expecting it that won't get it" because of the storm.

"It just may be a little later than otherwise expected," Murphy said.

RELATED: Check here for school closings across the Tri-State area
Central and North Jersey NJ Transit service remains suspended. Rail service will be brought back on throughout the day on a rolling basis, Murphy said.