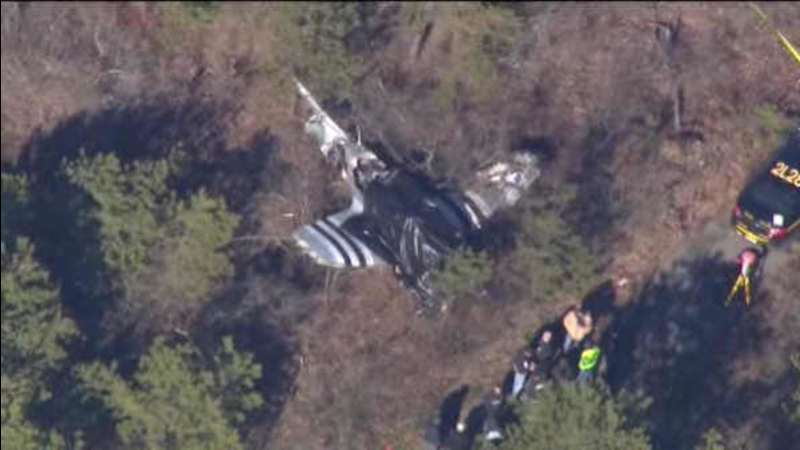 WESTHAMPTON, Long Island (WABC) -- The NTSB investigation continues after a single-engine vintage plane went down in the trees around Gabreski Airport in Westhampton on Sunday morning.

On board the plane was 65-year-old Robert Wilkie of Hempstead. He was a tax attorney, an aviation enthusiast and grandfather of three. Wilkie died in the crash.

"He had a sense of humor that rivaled any comedian. He was just that kind of guy," said Robert's daughter-in-law, Nicole Wilkie.

2 men dead; 1 in critical condition after plane crash at Gabreski airport. Hear from their loved ones at 5 & 6 pic.twitter.com/wrys3KeKa0

Also killed was flight instructor Arieh Narkunski of Brooklyn. Narkunski was a mechanic in the Israeli Air Force, a son of Holocaust survivors, and a father of two.

"He loved planes so much. He had a passion his whole life since he was a little boy. Started flying school at 14," said his former wife, Annita Narkunski.

Narkunski was a taxi driver, but he recently began working as a flight instructor for Airborn Flight Services in Farmingdale.

"He was a great instructor. Everyone loved him. He was fun to fly with and very save. He was very thorough, never let substandard flying get past him," said Julian Zagorodnev.

The owner and pilot of the plane, Richard Rosenthal of Huntington Station remains in critical condition at Stony Brook University Hospital. He is alive thanks in part to FDNY firefighter Joseph McCarthy and his fellow Army National Guard members who were doing a helicopter training mission nearby.

"We were approximately a mile and a half from the field, and we're told there was an aircraft missing. From that time to the time we found the aircraft, it was about a minute. And on the ground within a minute and a half. We had the crew members get out and proceed right to the aircraft. These guys went through the back of an aircraft," McCarthy said.
Related topics:
east hamptonlong island newsplane crash
Copyright © 2021 WABC-TV. All Rights Reserved.
TOP STORIES
AccuWeather Alert: Flash Flood Watch
Tri-state region prepares for heavy rain, high winds from Nor'easter
Albany man arrested after woman found stabbed to death on LI
NYC workers march across Brooklyn Bridge in protest of vax mandate
Prime minister arrested during military coup in Sudan
Crew member: Baldwin was careful with guns before fatal shooting
Laundrie family says they will not hold funeral for Brian
Show More
Fight between 2 knife-wielding homeless men spills into NYC pizza shop
How did Calif. go from COVID epicenter to lowest transmission rate?
Day 3 of early voting as NYC mayoral candidates prepare for debate
Hate crimes against Asians rose 76% in 2020 amid pandemic, FBI says
New portal bridge, governor's race bring Biden to NJ
More TOP STORIES News