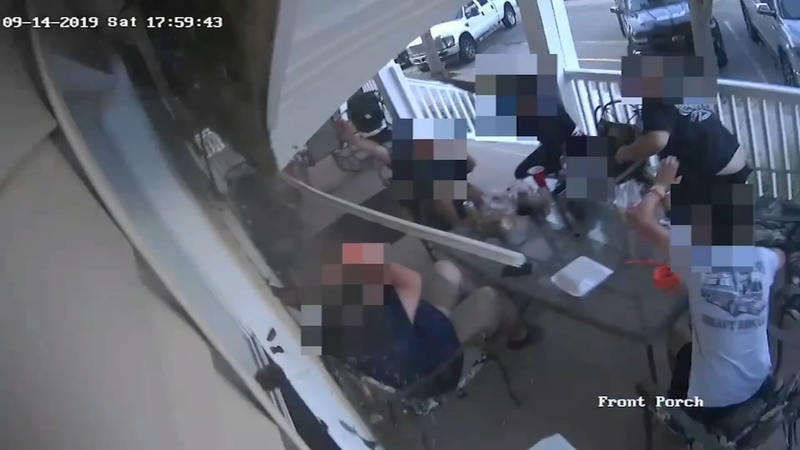 WILDWOOD, New Jersey -- Body camera video has been released by the Wildwood Police Department showing the chaotic scene just after a deck collapsed on September 14.

A camera on the front porch of the home on East Baker Avenue shows a group of people relaxing together moments before the deck above them falls around 6 p.m.

A camera inside the front door shows the deck coming down, and people inside the home rushing to the door to help.

Outside, an officer is heard yelling, "BACK UP! Everyone back up!" amid the chaos.

Piece by piece, responders try to free trapped victims. Those who were not trapped were treated and carefully moved.

911 calls were also released from that evening. A frantic caller is heard pleading, "Please send help!"

The dispatcher replies in a comforting voice, "OK they're on their way. Don't hang up, OK?"
Officers tried to gather information as patients were pulled from the debris.

An officer is heard saying, "Were you guys outside? How many people were on the top deck?"

No fatalities have been reported, but almost two dozen people were injured.

At least 22 people were injured, including children, when a deck collapsed at a home in Wildwood, New Jersey. George Solis repots on Actin News at 10 on Sept. 14, 2019.

The cause of the collapse is still under investigation, according to city officials.

On Monday afternoon, a spokesperson for the New Jersey Department of Community Affairs responded to an inquiry from sister station WPVI with this statement:

"The City of Wildwood participates in the State Local Cooperative Housing Inspection Program (SLCHIP) where city municipal employee(s) conduct inspections on behalf of the Department of Community Affairs' Bureau of Housing Inspection (BHI). The City of Wildwood Construction Office, including police and fire, is leading the investigation on the deck collapse. BHI has not ordered any additional inspections of beach homes, including decks, in Wildwood. Currently, inspections in all multiple dwellings registered with BHI are conducted on a 5-year cyclical basis or based on a complaint basis outside of their normal cycle."