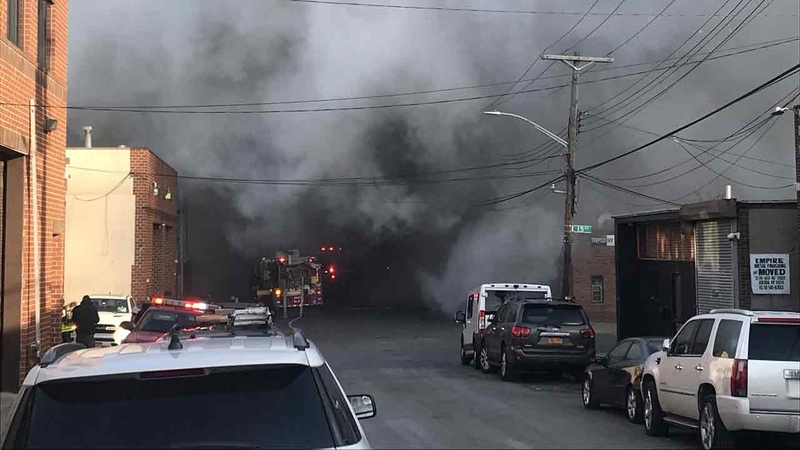 COLLEGE POINT, Queens (WABC) -- One person is hospitalized in critical condition after fire broke out at a business in Queens Monday morning.

The blaze started around 7:45 a.m. Monday in the basement of a company on 14th Avenue in College Point that supplies wholesale toys and medical equipment.

#FDNY members continue to operate on scene of a 3-alarm fire, 128-20 14th Ave in #Queens pic.twitter.com/jTwGjjdLwt

Firefighters arrived on the scene in less than four minutes. The fire spread quickly, and a third alarm was struck.

Video from the scene showed heavy smoke billowing from the building. It was whipped by winds of up to 40 miles an hour as temperatures hovered close to zero.

At one point, firefighters were from the building after a number of oxygen tanks exploded.

"As always in the cold weather, we're mindful of the operational challenges due to freezing, slipping hazards and getting hose lines in position, but we were able to overcome those situations," FDNY Assistant Chief Tom Richardson said. "The firefighters did an excellent job."

Several workers were in the building when the fire started, and one was found unconscious on the first floor.

The victim was taken to Jacobi Medical Center and is listed in critical but stable condition.

HAPPENING NOW: One injured in a fire along 14th Avenue in College Point Queens. @ABC7NY pic.twitter.com/FZtCwvEHPs

"We have two ambulances and an MTA bus here for rehabilitation for our members, to keep them warm and keep them out of the cold as we relieve personnel," Richardson said.