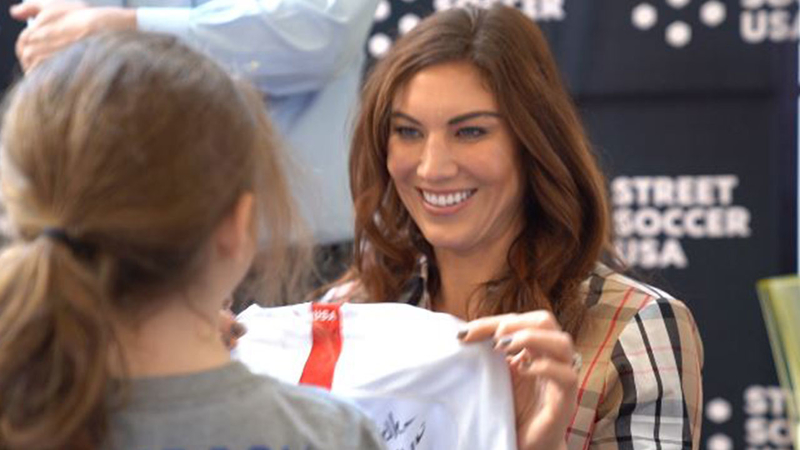 NEW YORK, New York (WABC) -- Former U.S. women's soccer goalkeeper Hope Solo might not be on this year's World Cup squad, but she is still making saves off the field during Women's History Month.

The World Cup champion and two-time Olympic gold medalist has partnered with Street Soccer USA, a national nonprofit organization that uses soccer as a tool for social change, in their mission to training and hiring more female soccer coaches/trainers.

Solo, who has made headlines in her ongoing battle over pay equity for professional female athletes, is hoping her role as Street Soccer USA's ambassador will bring a diversity to the soccer community.

"Right now there's mainly male coaches," she said. "And the studies have shown that the more female coaches involved, then the more young girls will participate in the sport of soccer."

President and CEO of Street Soccer USA Lawrence Cann said that he feels very lucky and proud to have Solo be a part of their goal.

"It's very important to our girls in our neighborhoods to see women in positions of power who are leaders and who are athletes to make sure that it is okay to play ball," Cann said. "So having Hope as an ambassador standing for that is incredible."

On March 5, Street Soccer USA hosted this new initiative at a fundraising breakfast in New York City where 100 percent of the funds go directly to training and hiring female coaches as mentors, role models and change agents in local neighborhoods.