1 hurt, 14-year-old in custody in shooting at California high school 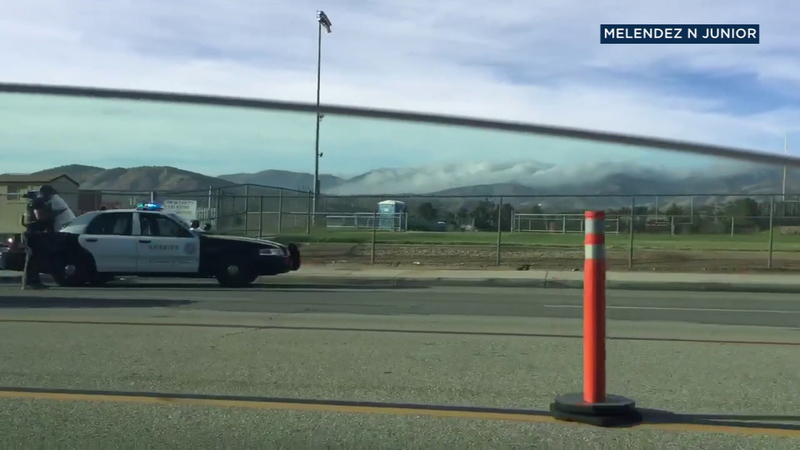 1 hurt, 14-year-old in custody in shooting at California high school

PALMDALE, California -- A teenage boy was wounded and a suspect was detained Friday morning in a shooting at a high school in California.

Police, EMS and other first responders rushed to Highland High School in Palmdale after several reports of an active shooter.

The Los Angeles County Sheriff's Department confirmed that one gunshot victim was hospitalized after the incident. Authorities said the victim is a 15-year-old boy who was shot through the forearm and transported himself to a local medical center. Sheriff's officials said the boy was in stable condition.

According to police, the 14-year-old suspect used a rifle to shoot his classmate and then dumped the gun in the desert before he was caught in a shopping center.
WATCH: Sheriff's spokesman discusses school shooting in Palmdale
EMBED More News Videos

A Los Angeles County sheriff's spokesman spoke at a news conference after a shooting at Palmdale's Highland High School left a teenage boy wounded on Friday, May 11, 2018.

Student Pauline Guijaro said she heard a volley of "around 10 gunshots. It's really hard to wrap our head around this."

Douglas Alexander, a teacher, described the aftermath of the initial gunfire.

"A bunch of kids started running out to me, towards me, with very panicked looks on their faces," Alexander said. "They basically said, 'Mr. Alexander, turn around, turn around, there's an active shooter.' And I didn't really have time to react to that because almost immediately after that I heard one single gunshot very loud and very close by."

The suspect's identity was not immediately released.

The campus, at 39055 25th Street West, was initially placed on lockdown along with all other schools in the Antelope Valley Union High School District. Just after 9 a.m., Los Angeles County sheriff's deputies confirmed that Highland High School had been cleared; the lockdown was lifted about 90 minutes later.

"This is ridiculous -- there's too many school shootings," said parent Tracy Reed, whose son texted her about the shooting at his school. "I mean, it's tiresome. We're not supposed to be like this -- we're the United States. Our kids aren't supposed to be hurt."

According to investigators, multiple callers said there was a man with a gun at the school shortly after 7 a.m. A swarm of deputies and California Highway Patrol officers arrived at the scene within five minutes and established a perimeter in the area.

Authorities also set up an area to receive worried parents who were rushing to the school to pick up their children.

"Please go to Avenue P-12, and deputies will let parents through individually," Highland High School's principal said on social media. "This may take a while, so your patience is appreciated."

Law enforcement officials said earlier reports of a possible shooting at nearby Manzanita Elementary School were false. "There was no threat to that campus whatsoever," a sheriff's official said in a press conference.

A shooting at a high school in Palmdale left a teenage boy wounded on Friday, May 11, 2018.