Deliveryman gunned down during attempted E-bike robbery in Manhattan park 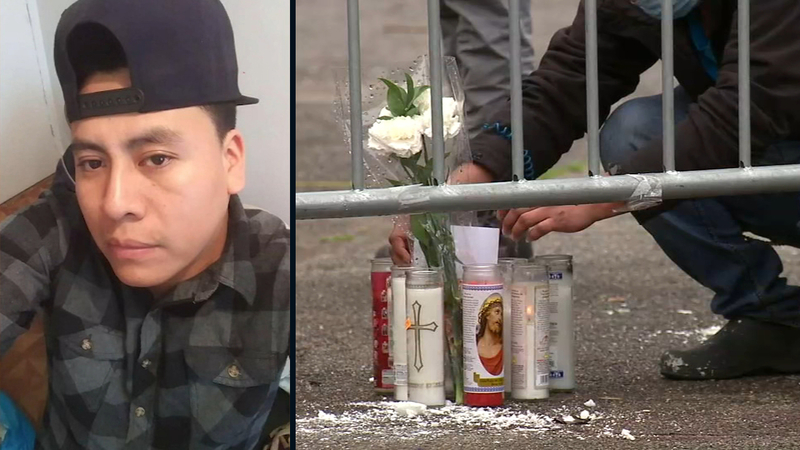 Deliveryman gunned down during attempted robbery in NYC park

EAST HARLEM, Manhattan (WABC) -- Police are searching for the man who fatally shot a deliveryman during an attempted robbery in East Harlem.

It happened around 11:15 p.m. Monday inside of the Poor Richards Playground, located at East 107th Street and Third Avenue.

Friends identified the victim as 29-year-old Francisco Villalva Vitinio, who they say was making deliveries when he was confronted by a man who demanded his electric bike at gunpoint.

When he refused, the man ended up shooting Vitinio in the chest and fleeing the scene.

He was found inside the basketball court, with his E-bike lying next to him.

"To the public, anyone watching right now, that's a homicide of a man that has, to our account, never been arrested, never really touched the law before, found in the middle of a playground on 108th Street between Second and Third Avenue," NYPD Commissioner Dermot Shea said. "Anyone with information, if you heard anything, please call Crime Stoppers."

He was rushed to Mount Sinai Hospital, where he was pronounced dead.

Police have made an arrest in the brutal attack, caught on camera, on a 65-year-old Asian American woman.

A memorial now sits in the exact spot where he collapsed, where friends gathered Wednesday to remember a man who they say simply worked hard to support his family.

"He left us," cousin Cenaido Billalba said. "We're no longer going to see him. It's sad. No one recognizes us."

It's a close knit circle, delivery men who consider themselves more like family. Vitinio was a part of that group, a father of two who came to the US from Mexico about seven years ago but still had deep roots there.

Just about everything he earned, he sent back home.

Now, friends are trying to raise money to send Vitinio's body back to Mexico for a proper burial. Area resident Ivett Gardia was happy to help. Click here if you would like to donate to the GoFundMe.

"He's considered an essential worker," she said. "For something like this to happen, should have never happened."

No arrests have been made, and police are searching for any surveillance videos of the incident.

"I can tell you they are working very, very hard on this," NYPD Assistant Chief Jason Wilcox said. "They've been working non stop since the incident, trying, obviously, to get video, witnesses or making connections to other crimes that may be happening in Manhattan North to see if there is any nexus to them."