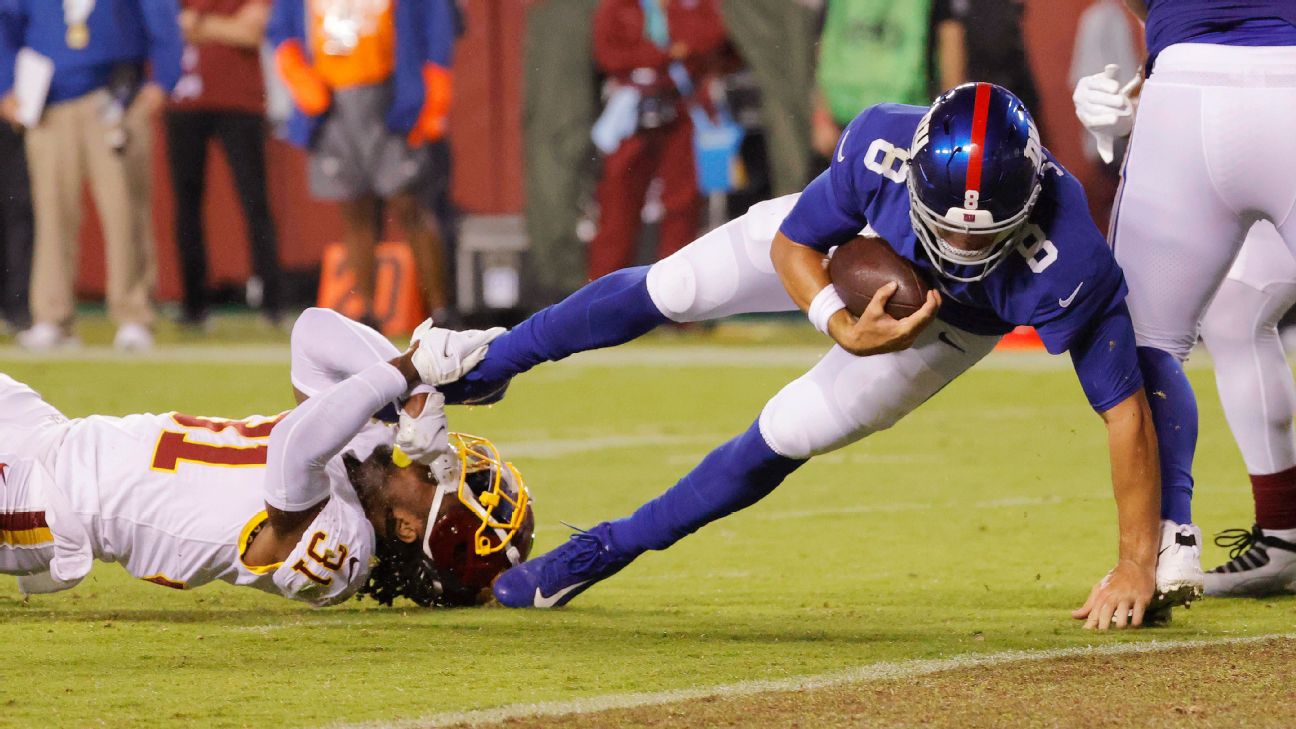 EAST RUTHERFORD, N.J. - The New York Giants looked smooth against the Washington Redskins at FedEx Field on their opening drive, which ended with a Daniel Jones 6-yard touchdown run.

Offensive coordinator Jason Garrett called Jones' number on second and goal from the Washington 6-yard line. Guards Will Hernandez and Nick Gates sealed their defenders and Jones ran through a sizable hole up the middle. He powered through safety Kamren Curl at the 4-yard line and dove across the goal line for the opening score at 7:39 of the first quarter.


It capped an 11-play, 79-yard drive after Washington had gone three-and-out.

For Jones it was his second rushing touchdown of the season. He also rushed for a touchdown late in a season-opening 27-13 loss to the Denver Broncos. Jones also completed all four of his passes for 45 yards on the drive.

Jones is the first Giants player since 2005 to rush for a TD in the team's first two games of the season. Both Brandon Jacobs and Tiki Barber did it in 2005.

Washington responded to the score when receiver Terry McLaurin did what he's done often against the Giants: hurt them. In three games entering tonight, McLaurin has a combined 21 catches for 275 yards against New York.

In the second quarter, he caught a deep out for a 16-yard gain in which he turned cornerback James Bradberry around by selling the post route before turning back outside.


One play later, he caught an 11-yard touchdown pass with another strong route, once more beating Bradberry -- but without a fake. The pass from Taylor Heinicke was slightly behind him, but McLaurin reached back for the catch. It was McLaurin's second career touchdown reception against New York.

The Giants turned aggressive midway through the third quarter. After failing to complete a deep ball to Kenny Golladay down the right sideline, Jones took another shot later in the drive.

This time he connected on a beautifully-placed dart to Darius Slayton for a 33-yard touchdown down the left sideline. Slayton beat Washington offseason acquisition William Jackson III and kept his feet inbounds for the score.