Vidal in contention for Chile return 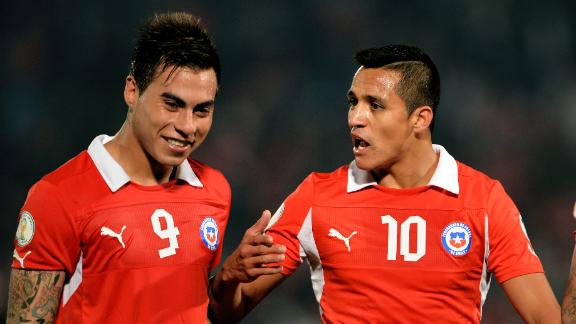 Chile midfielder Arturo Vidal could start Friday's World Cup Group B game against Australia despite not having the medical "all clear" from his national team doctor.

Juventus star Vidal, 27, underwent surgery on a knee meniscus injury on May 6, and has been working hard to recover in order to play in the competition, leading to concerns over whether he might risk his long term fitness should he suffer a relapse.

La Roja coach Jorge Sampaoli told his pre-game news conference on Thursday that Vidal himself was keen to play against the Socceroos, and his "quality and experience" could have a bearing on the selection decision.

"The decision over whether Arturo will play tomorrow will be taken in the coming hours," Sampaoli said. "He has trained as normal for three or four days. He might not have the match fitness of the others, but you cannot forget his quality and experience.

"He really wants to play. Only Arturo Vidal knows if his knee is ready to hold up in competition. He is leaving aside aspects of his future to represent his country at this moment."

Vidal has already played 15 minutes in Chile's warm-up friendly against Northern Ireland on June 4. However reports in the local media have suggested that medical staff are still concerned that the injury has not been given enough time to recover properly.

Asked by Chilean media outlet La Tercera whether in his opinion Vidal was fully recovered yet, national team doctor Giovanni Carcuro was carefully diplomatic with his words.

"I cannot answer that question," Carcuro said. "This term "medical all-clear" is different for professional athletes than normal people.

Arturo is being monitored permanently, checked every day. His chances of playing in the World Cup are up to the coach."

Chile's other Group B games are against Spain on June 18 and Holland onJune 23.

Vidal's fitness could also affect his club future -- with both Barcelona and Real Madrid being linked over recent months with moves for the all-round midfielder in the Spanish press, although he himself has given no indication of wanting to leave Juventus.

Chile aiming for deep run
Chile come into the World Cup on fine form and determined to make a run deep into the tournament.

Arturo Vidal lands at #16
Gab Marcotti joins the guys to discuss the #16 and #17 players on our list: Bastian Schweinsteiger and Arturo Vidal.

What to watch for: Day 2
Our ESPN FC World Cup experts preview what will be the main talking points for day 2 in Brazil.

Will the Chileans top Australia?
The ESPN crew analyze the Group B match-up between Chile and Australia, and what it may take to advance past the group stage.
Related topics:
sportsespnchilefifa world cupaustraliaarturo vidal
Copyright © 2020 ESPN Internet Ventures. All rights reserved.
More Videos
From CNN Newsource affiliates
TOP STORIES