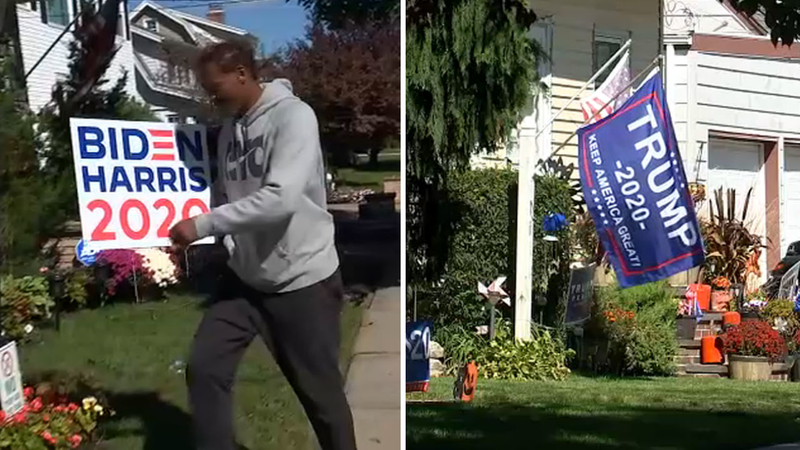 LYNBROOK, Long Island (WABC) -- Residents who live on a small street on Long Island are proving it is possible to support different presidential candidates and still get along as neighbors.

The lawns of about 10 homes on Melrose Avenue in Lynbrook are decorated with campaign signs and flags for President Donald Trump and former Vice President Joe Biden.

"They say it's like a war on Melrose, but it's not," said resident Nicole Sanito. "We are neighbors and we're friends."

It began about a month ago when one resident put up a Biden sign, which was stolen. Neighbors believe the thief or thieves came from outside the neighborhood. That only fueled the residents' desire to put up more signs.

"You have a right to have your own opinion," Tim Martin said.

Martin put a large flag with the faces of Biden and his running mate Senator Kamala Harris on the second floor of his home.

Grace Levonius, who has a Trump flag on her house and Trump signs in her yard, said no hard feelings exist between neighbors.

"We still all talk to each other. We're neighbors. That's what neighbors do," she said.

"I don't understand why more people in more areas aren't showing who they would vote for. There's no harm in showing who you're going to vote for," she said.

Martin said their street has become a sort of local attraction with people driving by almost every day taking pictures and videos of the street.

"We love that. We love that,'" Martin said people stop and tell him from their cars.

Bill Ritter is joined by the political experts to analyze and discuss key takeaways and big moments of the vice presidential debate.