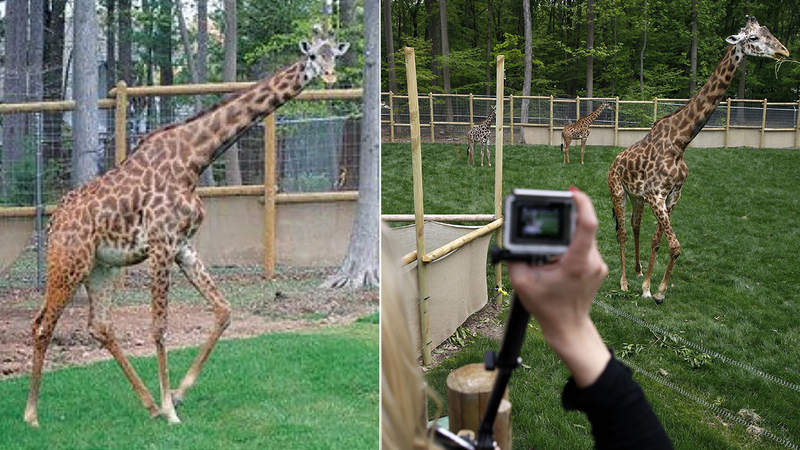 WEST ORANGE, New Jersey (WABC) -- An 18-foot-tall Masai giraffe at New Jersey's Turtle Back Zoo has died from complications during a medical procedure.

Essex County Executive Joseph DiVincenzo, Jr., announced that Hodari, one of the beloved giraffes at the zoo's African Adventure passed away on Wednesday, May 31, at 3 p.m.

"We are deeply saddened by the passing of Hodari," DiVincenzo said. "On behalf of Turtle Back's staff, we cannot express how great this loss is. The Giraffe Exhibit quickly became Turtle Back Zoo's most popular attraction, and it was because of Hodari. He was the giraffe that was most comfortable being fed by the public, so our visitors became acquainted with him the most."

He arrived at the zoo from South Carolina in 2015 and was the marquee attraction of the Giraffe House, which also features three other giraffes that came from Florida and San Diego.

Officials say the 11-year-old died under anesthesia while a veterinarian and dental specialist worked on his teeth to correct a problem that was making it difficult for Hodari to eat. The procedure became necessary when zoo staff observed him exhibiting strange behavior.

Dr. Jon Bergmann said they knew there were risks, but they believed the procedure would be beneficial.

"We observed that Hodari was having difficulty eating and decided performing the procedure would prevent further complications from occurring in the future," Dr. Bergmann said. "We believed this would give Hodari a better quality of life, improve his overall health and allow him to continue to thrive at Turtle Back Zoo. We knew there were risks when putting an animal of Hodari's size under anesthesia, but we also knew repairing his teeth would be more beneficial for him."

The exact cause of death will be determined by a necropsy.

The African Adventure exhibit also features animals found in the African savanna - eland, whistling ducks, ostrich and tortoises. The exhibit is the largest at Turtle Back Zoo and cost about $7 million to develop.