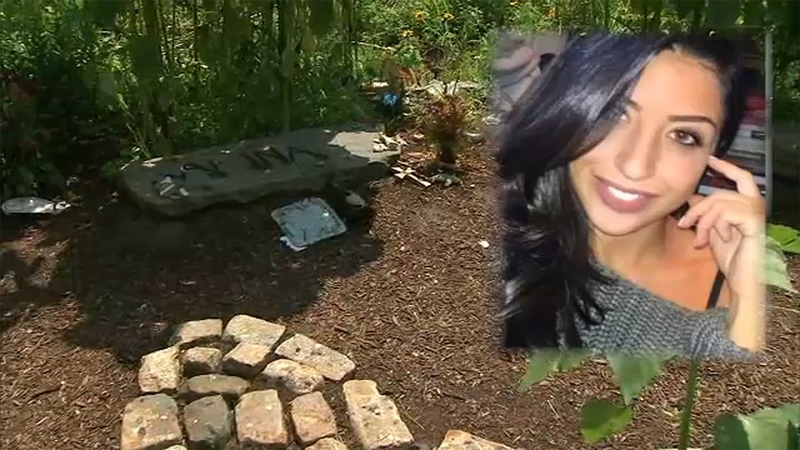 HOWARD BEACH, Queens (WABC) -- She went out for a jog and never came back.

Wednesday marks one year since Karina Vetrano was killed in Howard Beach, Queens.

Her father found her body hours after her murder, and now returns to that spot.

"It seems like a year that's been condensed into 20 seconds," said Phil Vetrano, Karina's father.

On the eve of what was the worst day of his life, Phil, for the first time, took a television camera to the exact spot where he found his daughter's body.

"I walked 100 feet past here, calling her name," he said. "I just walked in and there she was, my life ended."

On August 2nd, Karina Vetrano was attacked and murdered while jogging alone in Spring Creek Park.

"She's been with me, she's come to visit me on occasion, I know she's left signs for all of us," Phil said.

It is the same path, Karina took that hot summer evening.

It's desolate, where police say the avid runner crossed paths with Chanel Lewis, who allegedly snapped, and strangled Karina to death.

But Phil has brought light to this once dark place deep in the weeds.

He built a memorial in tribute to Karina.

"When I'm there, I find a little bit of peace, maybe because it's the only place I have any control, there's no control anywhere else," Phil said.

Each day Phil comes there to feed the birds and water the flowers.

And even angel wings that now hang outside Karina's bedroom window. Her brother Eddie made them. They are a mirror image of tattoo Karina had.

Phil tells Eyewitness News that one year later, the pain of losing his daughter has not eased.

"This is an urn and she's in there, we all have this," Phil said.

The family home which was once so full of life on Thanksgiving and Christmas, it's as if time has stood still.

"We have to put up a tree this year for my grandson, but it will never be the same," Phil said.
Report a correction or typo
Related topics:
howard beachnew york citymurderhoward beach jogger murdermemorial
Copyright © 2021 WABC-TV. All Rights Reserved.
More Videos
From CNN Newsource affiliates
TOP STORIES