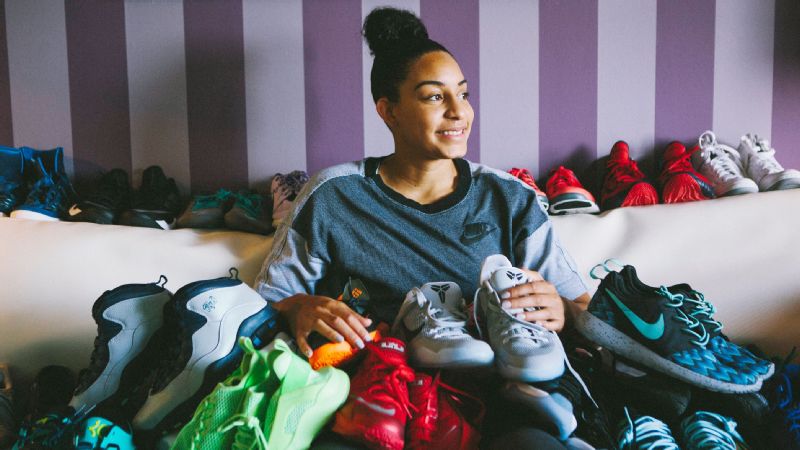 The sound of rubber soles squeakingacross the hardwood, the sight of the shoe in midair as a player makes a layup: Sneakers have always been an essential part of the game. Here, we celebrate them as such.

Hartley, 24, revealed her kick collection, including the pairs she picked up during tournament runs at UConn and those worn during the WNBA season from her White Plains, New York, apartment. Hartley's 7-month-year-old son Bryson, who's also a budding sneaker connoisseur, was kind enough to share his collection as well.

espnW: What kicks did you covet growing up?

Bria Hartley:The Air Jordans. I remember my first pair. They were 18s in a blue and white colorway, like my high school colors at [North Babylon High School in New York]. I distinctly recall these kicks because my dad would always say: "I'll never spend that much money on a pair of sneakers." But eventually, he bought me a pair.

However, my favorite Jordans are the 11s, and I own several. The sneakers were re-issued in 2010, during my senior year of high school, and I wanted them badly. Luckily, my mom got them for me as a Christmas gift. They were brought to market again recently, and I got another pair.

espnW: How many pairs of Jordans have you amassed over the years?

BH:Maybe about 100 pairs. I'd store them at home, and after a while, I'd give away the ones that didn't fit me anymore. I had lined shelves of Jordans.

espnW: Any backstories on how you acquired your favorite styles?

BH: For the Nike LeBron 12 Lows, I bought them in Vienna when I was playing in Hungary around [2014].

I got the Nike KD VI "Liger" sneakers during the Final Four [in 2013], that's when I won my first national championship.

espnW: Are you superstitious when it comes to picking what pair you rock for game day?

BH: Oh, for sure. If I'm playing well, I'll keep the same shoes in the rotation unless they get worn out, and I need to swap them. So far this season I've been switching between the KD [9 Elites] and the new LeBrons. I also wore the KD 10 Oreos during this year's winning streak.

espnW: What goes into picking out a shoe for game use?

BH:It depends on comfort. I had a foot injury a couple of years ago, so, I had to pick a sneaker that worked best with my orthotics.

espnW: How would you design your sneaker?

BH: Probably high-tops. No crazy colorways. I'd likely go with gray or black and white with a red accent.

espnW: Who in the WNBA do you think should design a shoe?

BH: Brittney Griner would come up with a great shoe concept. She's fun and likes to enjoy herself. I think she'd develop an interesting design. All her tattoos are artistic as well, so that's cool too.

espnW: What pair of sneakers do you want to cop right now?

BH: I like the LeBron Soldiers. My teammate Sugar Rodgers just got a camo pair. Those sneakers are great.

espnW: You got into the sneaker culture at a young age, and it looks like you're passing that on to your son Bryson. What was his first pair?

BH: The Jordan 13 retros. Bryson also has the Nike Foamposites that he can't even fit into yet. Additionally, he has a pair of Jordan 11s and Nike Huaraches too.

espnW: Does Bryson have a favorite pair?

BH:Not yet, he still likes to kick his shoes off.

espnW: What do you think of Maya Moore's forthcoming Air Jordan 1 release?

BH: I like those a lot; they'll be my first pair of Jordan 1s [when they hit stores on Sept. 30]. Plus, I have to support Maya.

espnW: Any thoughts on the inclusion of women in sneaker culture?

BH: Women are always said to have a lot of shoes. Coming from the basketball world, naturally, I have a lot of sneakers. It's unfortunate that when you go to a women's section, there aren't as many sneakers as there are on the men's side.