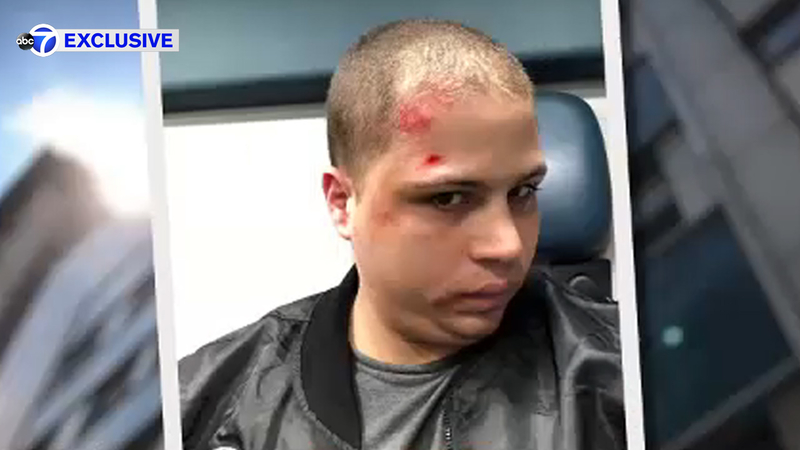 LOWER MANHATTAN, New York City (WABC) -- 7 On Your Side Investigates has uncovered more claims of abuse at the hands of welfare agency police after a similar report earlier this month.

Last April, an unemployed Victor Rivera went to the offices of Human Resources Administration in Lower Manhattan to apply for food stamps. He ended up leaving in an ambulance, bloodied and bruised.

In an exclusive interview with 7 On Your Side Investigates, Rivera says HRA Police Officer Lamont Baker beat him up following a heated verbal exchange.

"You know, as a peace officer, your job is to make peace, not try to obstruct peace," he said. "(Baker) wasn't trying to hear my side of the story, so he threw me up against the wall, placed me in handcuffs."

"He punches me three times in the face, that's when I drop to the ground," he said. "And then, I just started feeling kicks to my body."

Rivera said Baker took him to a back room, where he says the assault continued until he blacked out.

"I was definitely afraid," he said. "I was afraid for my life. For the simple fact that I was in handcuffs, and I couldn't do anything about it."

Rivera was charged with harassment and disorderly conduct for allegedly causing public alarm and disruption. After being charged, Rivera was taken to the hospital by ambulance.

Medical records seem to back up his Rivera's claim that he lost consciousness during the assault.

We approached Officer Lamar Baker outside the Human Resources Administration offices in Lower Manhattan, and Baker's only comment was to, "Get that (camera) out of my face."

The charges against Rivera were dismissed by the court, and he reached out to us after seeing our story about another HRA client, Laura Ziliolli. She was sexually assaulted last year by an HRA peace officer who is now serving five years in prison for the attack.

"The culture of the HRA Police Department needs to be investigated," he said. "There appears to be a widespread pattern of abuse of arrestees."

A spokesperson for the HRA issued the following statement:

"We take these allegations very seriously, which is why we initiated an investigation as soon as we were made aware of this issue. We will take appropriate action depending on the outcome of the ongoing investigation."

DO YOU NEED A STORY INVESTIGATED? Jim Hoffer, Danielle Leigh and the 7 On Your Side Investigates team at Eyewitness News want to hear from you! Call our confidential tip line 1-877-TIP-NEWS (847-6397) or fill out the form BELOW. You can also contact Jim and Danielle directly: Jim Hoffer: Email your questions, issues, or story ideas to 7OnYourSideJim@abc.com Facebook: facebook.com/jimhoffer.wabc Twitter: @NYCinvestigates Danielle Leigh Email your questions, issues, or story ideas to 7OnYourSideDanielle@abc.com Facebook: DanielleLeighJournalist Twttier: @DanielleNLeigh If using the app, click here to send us a news tip
Report a correction or typo
Related topics:
new york citylower manhattanmanhattan7 on your side investigationpolice officerpolice brutality
Copyright © 2021 WABC-TV. All Rights Reserved.
7 ON YOUR SIDE INVESTIGATION