Yanks' Luke Voit on Aaron Boone ejection: 'All of us respected that' 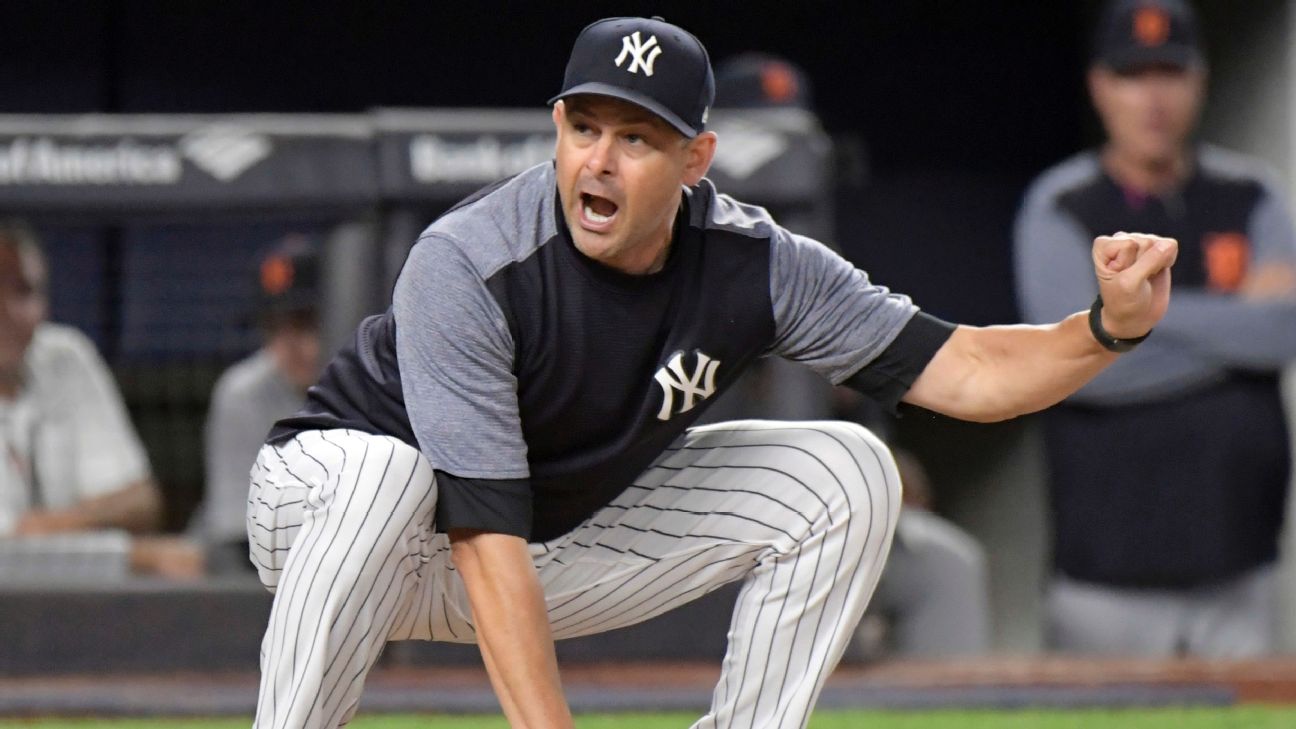 ESPN
By Coley Harvey
NEW YORK -- Aaron Boone played all over the infield during his 12 seasons as a big leaguer.

But not once did he serve as his team's catcher.

Friday night at Yankee Stadium, after giving plate umpire Nic Lentz a steady earful of complaints about his strike zone, Boone broke into his best catcher's impression during the best rant of his young managerial career. The fifth-inning tirade provided his players a humorous, yet invigorating moment that they felt sparked the Yankees' eventual 7-5 win over the Detroit Tigers.

"It was great," said Yankees ace Luis Severino, laughing. "That's how a manager has to act in that situation."

It was with Yankees rookie Gleyber Torres batting with two outs in the fifth when Lentz ejected Boone while the New York manager stood on his top-step dugout perch. Lentz had grown tired of the skipper's incessant barking about balls and strikes. As he got tossed, Boone was yelling his disapproval about a called second strike his entire bench felt was out of the strike zone.

At that point Boone, ejected for a third time in his first season as manager, went into an elaborate show-and-tell exercise. After he charged out to approach Lentz with a mouthful of expletives, Boone acted out what he believed the strike zone ought to be.

He did it the best way he knew how: by bending his knees and squatting like a catcher.

"Do your job!" cameras caught Boone shouting, as he turned from the umpire and got into the crouch in front of a standing Tigers catcher James McCann. From his crouch, Boone mimicked catching two pitches while screaming: "That's a ball. That's a strike. OK?"

A rather sheepish Boone later addressed reporters about the spur-of-the-moment action.

"I hadn't stretched yet, so I wanted to make sure I was good and loose," Boone said. "I guess, [it was about] giving my kids something to make fun of me about."

It was Boone's first ejection since he was booted from a July 14 game at Cleveland. He also was ejected May 22 at Texas. The Yankees split those two games.

As for Friday's display, Boone's players were energized by it.

"He protected all the guys, for sure," said Torres, who went on to strike out a pitch later. "He's the manager. He does a good job, and we're proud for that. After that, we started [to get] a little more excited and we tried to win."

When Boone's eruption occurred, the Yankees were trailing 3-0 and were on the wrong side of a no-hit bid. Tigers starter Jordan Zimmermann had been rolling. He went on to retire 16 of his first 18 batters.

Boone gave it to them.

"Everybody after that is super excited," Torres said. "We started to have a little more excited play, play a little more hard. That was the difference."

An inning after Boone's ejection, 35-year-old Brett Gardner launched a two-run homer to right to break up the no-hitter and cut into Detroit's lead. An out later, Aaron Hicks added a solo shot to right, and then Miguel Andujar backed him up a batter later with his own solo home run to left.

Both Hicks and Andujar hit their 23rd home runs that inning, pushing the Yankees to a 4-3 lead. It was an American League-best ninth time New York has hit back-to-back homers this season.

"When your manager feels the same way that you are, and he goes out there and basically he told the umpire what he thought, of course that ended up to us having a big inning," Hicks said.

Although the Tigers went on to retake the lead by the seventh, an eighth-inning rally powered in large part by Torres' two-RBI double to left, pushed the Yankees back out in front. They held on to that lead.

"It just shows that he's got us, and he wants us to succeed just as much as he does, and he'll do what it takes," Yankees first baseman Luke Voit said of Boone's antics. "That was the right situation for him to do that. All of us respected that. It just shows what kind of guy he is. He wants to win.

"We were stuck in a rut. We weren't getting the job done these last couple games, and for him to do that, it definitely pumped us up."

Entering Friday's game, the Yankees had lost three of their past four games. It came on the heels of the Yanks earning a series sweep at Baltimore last weekend. With injuries to stars like Aaron Judge, Aroldis Chapman and Didi Gregorius, Boone's team has had to navigate a challenging stretch in recent weeks.

On Saturday, catcher Gary Sanchez is scheduled to come off the disabled list, and the Yankees will officially add Andrew McCutchen, a former National League MVP acquired through a waiver trade.

With these looming changes and the injury concerns that have confronted his team lately, Boone felt it necessary to give his players some inspiring words before Friday's game, Voit said.

"We're hurting, but a lot of guys have stepped in and done their jobs," Voit said, relaying the message of Boone's speech. "We need you guys to pick it up. Obviously we've got guys coming back here soon. But we're good. We know we're going to beat everyone up.

"But just take it inning-by-inning, pitch-by-pitch kind of thing. Get the small things right and the big things will take care of themselves."