After elimination, Yankees reflect on season and look ahead to 2019 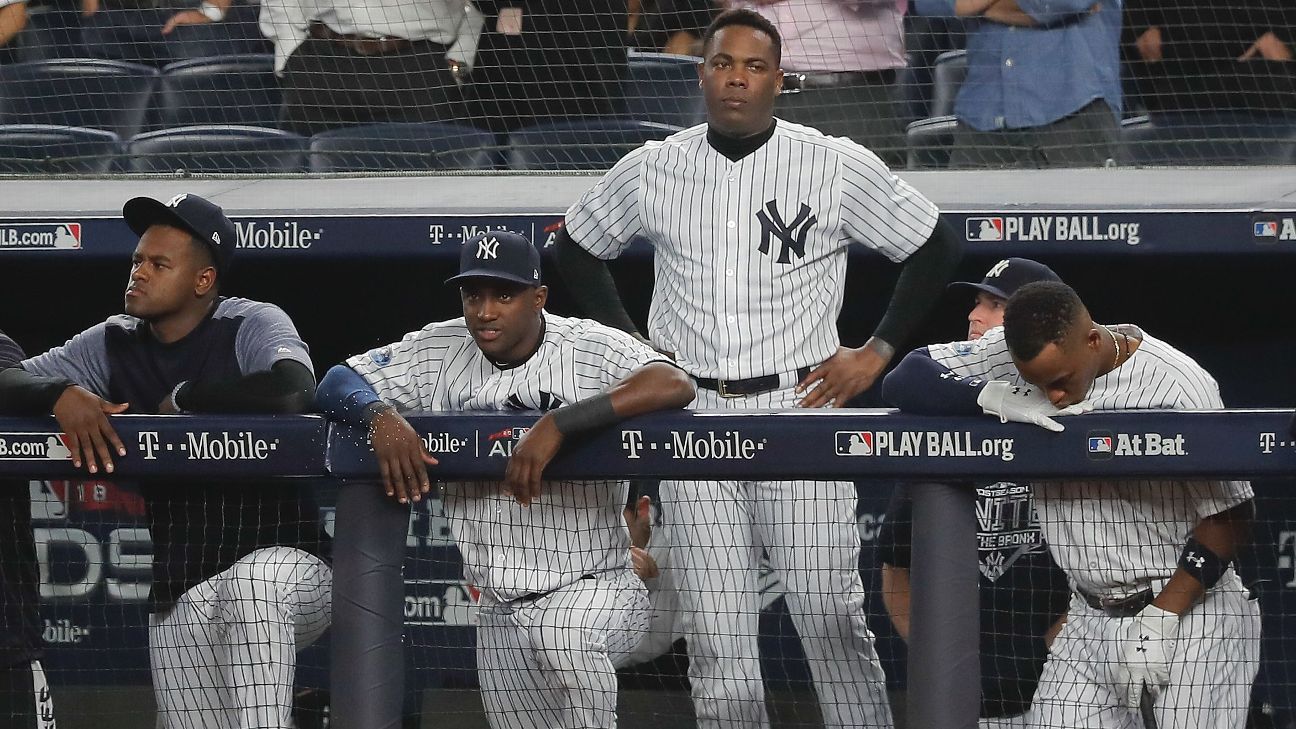 NEW YORK -- As he stood in the middle of the New York Yankees' clubhouse, a glossy-eyed Brett Gardner summed up the feelings that lingered in the dry air late Tuesday night.

New York's 28th World Series banner will have to be raised some other year.

As Gardner and his teammates consoled one another with farewell hugs and goodbye handshakes immediately after their 4-3 loss to the rival Boston Red Sox in the decisive Game 4 of the American League Division Series, reality began to hit.

The Yankees' record-breaking season that was high on hype and even higher on expectation was over. No trophies will be hoisted. No more champagne sprays will be toasted. Only plane tickets will be bought and vacation plans set.

Credit a second consecutive night of poor pitching, questionable bullpen management and a mostly ineffective offense for making that happen. All of it was nearly made moot, though, with a daring ninth-inning rally that ended when replay review confirmed that rookie Gleyber Torres was out by a half step at first base on the game's last play.

"It just tells you a lot about this team," veteran CC Sabathia said. "We fought all year."

After overachieving as an extraordinarily young team a year ago and being comparatively content with ending up right on the precipice of the World Series with a Game 7 ALCS loss, the Yankees are far from pleased with this year's dud of a playoff experience.

Back during spring training, as publications pronounced that the Yankees would advance to this year's Fall Classic, the Yankees were expressing similar wishes themselves.

"If we don't win [it all], it's not a great year for us," reliever Dellin Betances said in February. "It's probably the first season I've ever come in with those expectations."

Even newcomers had those same hopes and aspirations.

"I don't want to [just] experience the postseason," Giancarlo Stanton said after Tuesday's game. "I want to win it all."

Stanton, who came to New York as part of last offseason's biggest trade, played a part in the Yankees' early exit. His failure to come up in the clutch in three separate situations in the ALDS didn't help the team.

Following a pair of strikeouts in key seventh- and ninth-inning at-bats in the Yankees' Game 1 loss, Stanton was hitting with two on and no out during the Yankees' valiant late-game comeback try in Game 4. A three-run home run from the Yankees' regular-season homer leader, and the game would have been tied, possibly helping send it to extra innings.

But as he did earlier in the series, Stanton struck out during the pivotal moment.

"Obviously he had some chances, some chances where he could have made a big difference with a big hit or whatever, and it just didn't happen in this series," Yankees manager Aaron Boone said. "But that's also why we have nine guys. It's not all about one guy, and we just weren't able to get enough."

The Yankees got their share of solid play from Aaron Judge and Gary Sanchez in Game 2, the only series contest New York won. Both homered that night in a 6-2 win that had the Yankees feeling energized entering the only two games of the series they were playing at home.

With the series tied 1-1, the Yankees believed they had a chance at taking the series at home, where their raucous fans could play an intimidating role.

The 49,641-person crowd did its part in Game 4, as it tried to supply a level of added electricity within the ballpark throughout the game. As early as the conclusion of the national anthem, the noise was noticeable. By the ninth-inning rally, the volume was unbearable.

"I thought we were going to come back and win. Everyone in the stadium, everyone in the dugout was going crazy," first baseman Luke Voit said of the comeback. "It's what makes baseball so great. You can get so close, but it stabs you in the heart at the end of the day.

Moments later, as he began packing up boxes to be shipped to his offseason home, Voit grabbed out of his locker the pair of goggles he had worn during last week's AL wild-card game celebration. He looked at them for a couple seconds, flashed a quick grin and threw them into a box.

Gardner was feeling doubly emotional following the loss because after 11 seasons with the Yankees, it might have marked his final game in pinstripes. He'll be a free agent in the offseason. When he was benched late in the regular season due to a string of poor offensive stretches, it seemed to suggest the Yankees might soon be comfortable moving on without him.

"I'd lie if I said that hasn't crossed my mind," Gardner said of his pending free agency. "I'll get all that figured out when the time's right, and try to enjoy the moments that I've had here."

He isn't the only veteran Yankee who may have played his last game in the Bronx. Tuesday's starter, Sabathia, also will be a free agent after agreeing to a one-year deal in December. Sabathia, who Boone felt comfortable sticking with despite the trouble he ran into during a rocky third inning Tuesday, has already expressed a desire to pitch next season.

"I love it here," Sabathia said. "It's a young team with a lot of talent and I'd love to be a part of seeing this thing through. Because it's going to go through."

Last year's rookie of the year, Judge, will play a key role in that happening.

Despite missing nearly eight weeks in the second half of the season due to a wrist injury (not to mention the post-All-Star break disabled list stints by Aroldis Chapman, Gary Sanchez and Didi Gregorius), Judge had a tangible impact in the postseason. He recorded hits in four of the five playoff games the Yankees played.

"It was a grind. Up and down the whole way," Judge said of the season. "Guys battling injuries, battling slumps, battling this and that. It was just another baseball season, and we know we came up short of our goal, and now it's just time to build off that and get ready for next year."