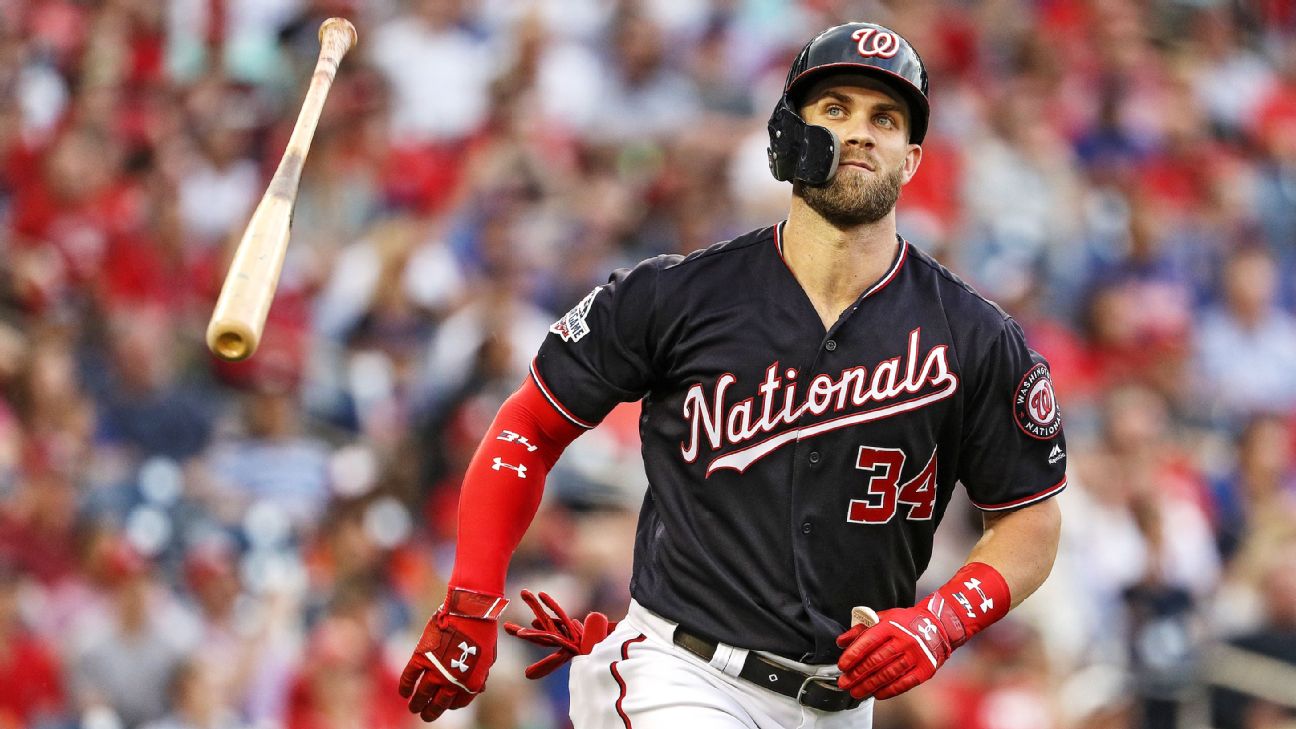 ESPN
By Coley Harvey
As Bryce Harper's free agency trudges along, New York Yankees right fielder Aaron Judge was asked about what it might take to bring the left-handed hitter -- who plays the same position as Judge -- to the Bronx.

Asked by TMZ Sports in a brief red-carpet interview this week, Judge said any time a team can add a player of Harper's caliber, it "is going to make them better." Harper, 26, is a six-time All-Star and former National League MVP for the Washington Nationals.

Judge was asked who would move from right to center field in the event New York was able to add Harperto an already-crowded outfield.

"He's got more speed than me, man," Judge said, smiling. "Wherever he wants to play. We'll make it work."

Just before getting honored at the Thurman Munson Awards in Manhattan on Tuesday evening, Yankees manager Aaron Boone said any similar scenario involving the two outfielders was currently an unrealistic one.

"That was just Judgey having some fun at the Super Bowl," Boone said. "Judgey would do a lot of things for the team. But I don't know. I think that he was just probably pressed in the corner at the Super Bowl and he gave a good answer.

"But I don't think we're going to have to worry about that."

There's at least one reason that scenario won't be happening.Aaron Hicks, who is coming off the best year of his career following a 27-homer, 79-RBI campaign, is expected to remain the Yankees' starter at the position in 2019. Brett Gardner, 35, enters spring training as the incumbent in left field, with Clint Frazier and Jacoby Ellsbury returning from injuries to compete for playing time there.

Giancarlo Stanton also factors into the Yankees' outfield plans. The team's primary designated hitter, he also spent 37 games playing right field last season. Many of those chances came after Judge suffered a wrist injury that sidelined him about two months.

The Yankees, fresh off an American League Division Series loss to the eventual World Series champion Boston Red Sox, have been rumored at times this offseason to be trying to pursue either Harper or Manny Machado. Although Yankees general manager Brian Cashman refuted such rumored interest in Harper during the Winter Meetings in December, he and other team officials did meet with Machado late that month.

The odds at this late offseason date are not high that either player ends up with the Yankees.

"Obviously [Harper] is a great player. But I think our team is pretty much set," Boone said. "Obviously things happen that force Brian and his staff to pivot on certain things. But I think it's safe to assume that we're going to spring training with the team that we expect to have."

Yankees third baseman Miguel Andujar and shortstop Didi Gregorius were being honored alongside Boone at Tuesday's awards dinner. A Machado signing could have adversely impacted both players' playing time. Even still, both infielders contended they would have had little concern about that if Machado had come to the Bronx.

"If he comes over, he makes the team better," Gregorius said.

The way Boone sees it, this team already appears to be in its best form, even without Harper or Machado in the mix.

"You never say never with anything, but we're anticipating that we have a great team right now and feel like we have a complete team that's ready to go compete for a championship," the manager said.

As for Judge's message through TMZ to Harper, Machado and other remaining free agents?