Grandmother of 1-year-old killed at Brooklyn cookout: "Put the guns down" 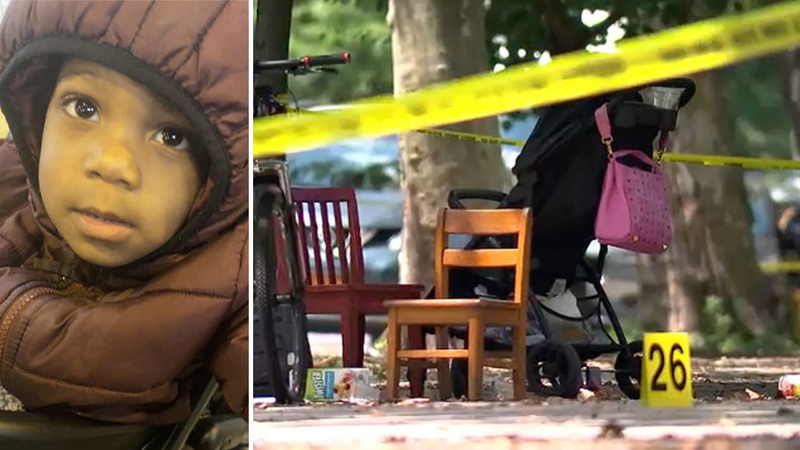 Grandmother of 1-year-old killed: "Put the guns down"

BEDFORD-STUYVESANT, Brooklyn (WABC) -- A 1-year-old boy was killed and three others were wounded when two gunmen opened fire at a family cookout outside a park in Brooklyn late Sunday, the latest tragedy amid a massive uptick in shootings around New York City.

The child was struck near the Raymond Bush Playground at Madison Street and Marcus Garvey Boulevard in Bedford-Stuyvesant around 11:35 p.m. He was identified as Davell Gardner, of the unit block of Chester Street.

Police say two men dressed in all black opened fire on the group and then fled through the park. There were no words exchanged or dispute before the shots were fired, according to investigators.
EMBED More News Videos

Gardner -- two months shy of his second birthday -- was shot in the abdomen, and on Monday, his grandmother was unable to hold back her tears.

"Right now, it's about saving lives," activist Tony Herbert said. "Throwing money to have basketball tournaments or painting damn murals on the street, that's not going to help us.

Mayor Bill de Blasio called the violence unacceptable, blaming it on the number of guns on the streets.

"To wake up this morning and learn that a 1-year-old child was killed on the streets of our city by gunfire, it's so painful, it's not acceptable," he said. "Our hearts need to be with Davell's family and know they are in our hearts and our prayers. It's never just police. It has to be police and community together."

Multiple children were caught in the middle of another busy weekend of gun violence, Including a 12-year-old in Crown Heights who was on a stoop when he felt a pain in his leg. He then realized he had been shot.

"Those that have the ears to hear will hear it, and those cannot understand will wonder what's going on," activist Apostle Leeds said. "We're calling them. Come. This going on right now is for all of us. We need to be here."

In all, 16 people were shot in 11 incidents over the weekend. Now, there is a call for city leaders to do more.

"These legislators, these politicians need to wake up," Herbert said. "We've told what should be done. They keep throwing money at organizations that come after the fact. It has to proactive."

Tommy Holliday's 18-year-old nephew was killed Friday in East New York. Like so many, he is pleading for justice.

"It's 'O.K.Corral' in the streets," he said. "We talk about what police doing to us, look at what we are doing to ourselves. What does 'black lives matter' if you're killing yourselves."

The calls for change aim to save lives, but for Gardner, it's too late.

"Put the guns down," Gardner's grandmother said. "Please. put them down. They're killing innocent people. Babies too."