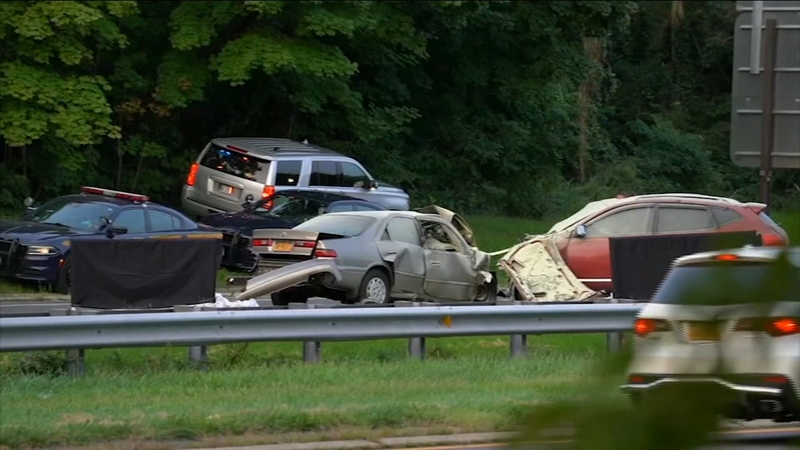 The crash involved three vehicles and a motorcycle and caused at least two of the vehicles to catch fire.

It happened eastbound near exit 30 in North Massapequa, in the Town of Oyster Bay, around 5:10 a.m.

Moments before the crash, someone made a 911 call about a wrong-way driver.

Authorities say a Toyota sedan with just the driver inside was traveling westbound in the eastbound lanes when it struck a Nissan Rogue SUV with four people inside.
EMBED More News Videos

Police give details on the deadly wrong-way crash on the Southern State Parkway.

A third vehicle, an SUV with one person inside, attempted to avoid the crash and hit the Toyota sedan.

A motorcyclist also tried to avoid the collision but lost control and hit debris from the crash.

"A motorcyclist who attempted to avoid the collision struck debris in the roadway and lost control," New York State Police Captain George Mohl said. "We believe that the operator of the Toyota possibly entered at either exit 30 or exit 31, both of which are less than a mile from the accident scene."

When authorities arrived at the scene, they began to pull some of the victims from the burning car.

"There was a fire that did ensue," Mohl said. "It was only brief, but our troopers who responded to the scene, did extricate or remove people from the vehicle, to ensure their safety had they survived."

The driver of the Toyota sedan was 33-year-old man Marvin Balcaseres, of Farmingdale, who was pronounced dead at the scene. Three people in the SUV also died, identified as the 67-year-old driver Ruben Sanchez-Flores, 57-year-old Edith Magana, and 34-year-old Ivis Sanchez-Cordova.

The fourth person inside the SUV, 44-year-old Nadia Sanchez-Cordova, is listed in critical condition at Nassau University Medical Center.

Police say the driver of the SUV was traveling from Hempstead to Farmingdale for work.

The driver of the third vehicle, 50-year-old Steven Miller, of Queens, was not hurt. The motorcyclist, 32-year-old Roberto Mack, of Georgia, suffered non-life-threatening injuries.

That section of the Southern State Parkway was closed for roughly five hours for the investigation but has since reopened.

The investigation is active and ongoing, and the Medical Examiner will perform a toxicology test on the wrong-way driver.