Small business says it's paying the price for bureaucratic bungle 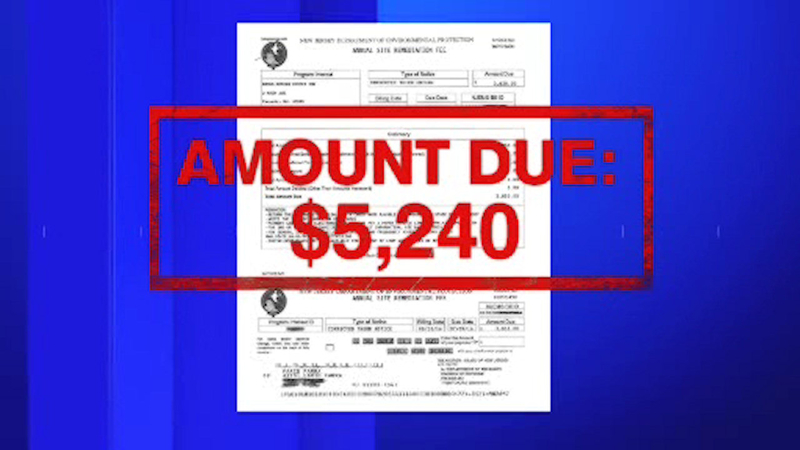 7 on your Side: 15-year-old problem comes back to haunt family business

PASSAIC, New Jersey (WABC) -- A local business says they're caught in a bureaucratic bungle, forced to pay the price, many thousands in fees billed from the New Jersey Department of Environmental Protection. The business owner says it's partly because the state says they're understaffed.

40 years ago, Fred Farra turned a rundown historic building, up for tax sale, into a beautiful showcase for the family's Italian furniture business.

But he found, buried in the parking lot, a 5,000 gallon oil tank which had to be removed.

"We hired an approved company and got it up," said Chris Farra, co-owner.

A receipt from 2002 shows the job had been done, and Fred remembers getting confirmation that no oil leaked on record so they thought that was the end of it.

"We were so happy the soil was clean," said Fred Farra, business founder.

Then in 2015, the Farras say they were blindsided by a bill that's now grown to more than $5,000 from New Jersey's Department of Environmental Protection, stating while their oil tank "had been removed" the state doesn't have an NFA or "No Further Action" letter in their file, for confirmation there's no oil contamination.

The state DEP says the property owners were wrong for not proving the soil around the tank was tested for contamination. It doesn't have a No Further Action letter on file. So the DEP hit them with four years of back fees.

But here's the rub, the Farras don't know why they should pay any fees. They say, the state started billing them annually in 2012, but never sent them any notices until 2015.

And when Chris asked a DEP supervisor why no one in over a decade since the tank was removed ever sent them anything, he got an even more shocking answer.

7 On Your Side asked New Jersey State Assemblyman Gary Schaer (D-Passaic) for help. He started his own investigation.

The big takeaway: When it comes to underground oil tanks, it's up to property owners to work with a professional licensed through the state to clean up the tank and the soil and get a no further action letter from the DEP. In this case, the Farras couldn't prove one ever existed. That's on them.

But some good news, Assemblyman Schaer called 7 On Your Side and after his intervention, the DEP told him, once the Farras do soil tests that come up clean or if needed, soil remediation, it will substantially reduce or waive the fees.
Related topics:
passaicsoil contaminationoil7 on your side
Copyright © 2022 WABC-TV. All Rights Reserved.
7 ON YOUR SIDE
7 On Your Side tips to dig out of credit card debt
Fake at home COVID tests are out there - how to spot them
Tips to safely donate to Bronx fire victims without being scammed
How to avoid car lease buy-out 'rip-offs'
TOP STORIES
AccuWeather LIVE: Snow turns into heavy rainfall
Mix of snow, heavy rain, wind hits Tri-State
Mass funeral held for Bronx fire victims
Man who posed as food delivery worker wanted in deadly shooting
Queens man who recovered from COVID twice celebrates 105th birthday
Woman killed after man pushes her in front of subway train
FBI identifies hostage-taker at Texas synagogue
Show More
Catch first full moon of 2022 Monday night
Pilot credited for miraculous crash landing released from hospital
7th grader dies after overdosing on fentanyl at school in Conn.
After Biden's first year, the virus and disunity rage on
Expect more worrisome COVID variants after omicron, scientists say
More TOP STORIES News