7 On Your Side Investigates: Thousands of New York City fire escapes rust away without inspection 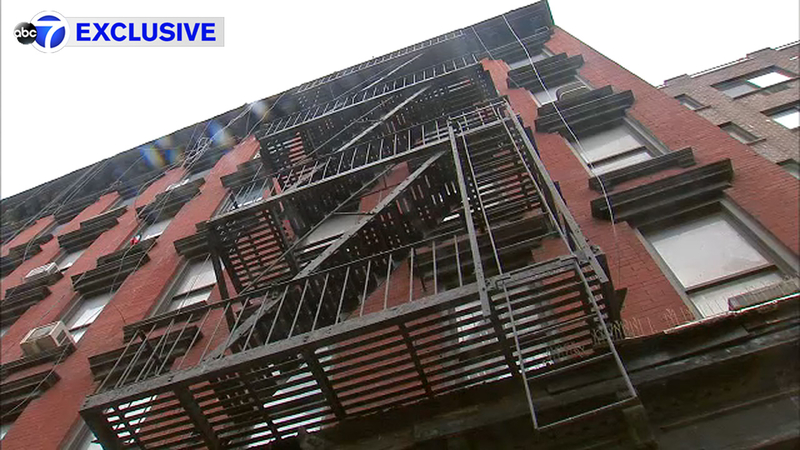 7 On Your Side Investigates: Thousands of New York City fire escapes rust away without inspection

NEW YORK CITY (WABC) -- When a step fell seven stories from a SoHo building's fire escape two weeks ago, it struck a man walking below in the head, killing him. The incident also exposed the city's weak oversight of these aging steel structures.

Cisco Meneses, inspector and founder of the National Fire Escape Association, told 7 On Your Side Investigates that the corroded step on the fire escape should have been flagged in its last inspection in 2013. Instead, the inspection found the fire escape was safe.

Our investigation revealed that in the days after the fatal accident, inspectors found three additional loose steps on the fire escape.

We've also learned that fire escape self-inspections are only required of building owners every five years as part of the city's mandatory facade inspection law, which applies to buildings six stories or higher. More surprising, perhaps, is that fire escapes below six stories -- for which there are tens of thousands across the city -- require no inspection.

We went to take a look at these types of fire escapes with Meneses to see what kind of conditions we'd find.

"Four of these steps are ready to drop right here," said Meneses, who found safety problems with nearly every fire escape we looked at.

"This bracket is supposed to be connected to that bolt," he said. "It broke off. It's supposed to be holding an entire staircase, so if overloaded, it's going to collapse."

Out of five fire escapes randomly picked in Hell's Kitchen, Meneses said all five would not pass due to lack of paint and excessive corrosion.

We wanted to see if the city had any clue how widespread the problem is, so we checked the 311 database and found in just the last 12 months, New Yorkers called to complain about fire escape problems nearly 1,700 times.

"That's a lot," DePew said. "The buildings department will hopefully get out and do some inspections. They need to send out a task force to look at these fire escapes."