7 On Your Side Investigates: Could your online review get you sued? 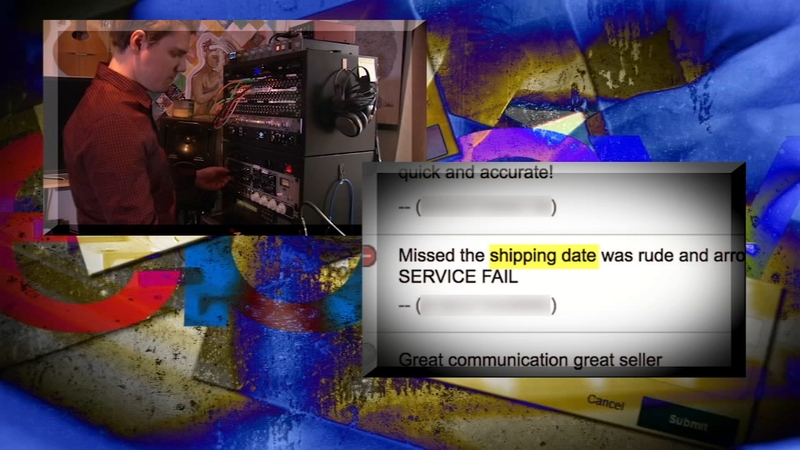 7 On Your Side Investigates: Could your online review get you sued?

NEW YORK (WABC) -- If you've ever written an online review, you've probably never considered it end up with a lawsuit. 7 On Your Side Investigates examined the dos and don'ts of public reviews after receiving an email from a viewer facing a defamation lawsuit for a 2016 eBay review.

In January 2017, Joshua Lutz wrote, "Missed the shipping date and was rude and arrogant in response. Customer service fail" in regards to a purchase he made on eBay.

Nearly one year later, Lutz learned the seller had filed a lawsuit in Queens Small Claims Court, arguing the review was defamatory and caused him physical and emotional distress.

The seller is seeking more than $4,600 in damages.

"I didn't curse, I didn't say anything," Lutz said. "I'm just baffled that this could happen."

Defamation attorney Christine Rafin said that while Lutz's review wasn't particularly aggressive, he and others who write similar reviews could still face some trouble.

"When it comes to a customers' experience and their subjective views about the transaction, typically that's not defamatory, and typically they wouldn't be sued for it," Rafin said. "It's just an issue of whether it's a statement of fact, that's false, and that typically can be proven false very easily."

Lutz's entire dispute centers around a roughly $5 piece of audio equipment he needed for a birthday gift he was making for a friend. The item arrived about two weeks later than the expected arrival date, causing Lutz to miss his friend's birthday.

Both Lutz and the seller shared more heated exchanges on eBay's private online message board, but Lutz said he intentionally tempered his comments on the public forum. He never expected a lawsuit.

The seller argued that Lutz's comments were wrong. He said he shipped the package within two days of Lutz's order and blames USPS for the delay. It wasn't the shipping date that was missed, like Lutz wrote, the seller argued, it was the expected arrival date -- out of his control.

Lutz explained that's what he meant.

"He gave me a date of arrival, and that date came and went," Lutz said.

However, that isn't what he wrote, leaving the seller a case, according to Rafin, and leaving it up to a judge to consider the context of what Josh meant.

"It does depend on context," Rafin said. "Courts typically look at it objectively, what an objective person viewing this comment would think."

"You have to be like a duck and let the water roll off your back," Lutz said. "You never know what trouble you could get into for what you say or do, the tiniest things you don't think about."

The seller declined participation in this story due to the ongoing lawsuit and instead provided a written statement.

It read, in part, "Negative feedback on eBay not only steers buyers away from my products, it also causes eBay to reduce the visibility of my offerings, this directly impact my revenue. If the two parties see things so differently that no common ground can be established, it seems logical to call on an impartial observer to render an opinion. That observer would be a judge."

Rafin said she doubted a judge would award the seller the damages he is seeking, but Lutz's experience is a wake-up call to slow down when writing a review, remember to clearly state reviews are personal experiences and opinions, not fact, and make sure any words used to describe a situation are entirely accurate.

Could a negative review online end up with a lawsuit? 7 On Your Side's Danielle Leigh explains how: