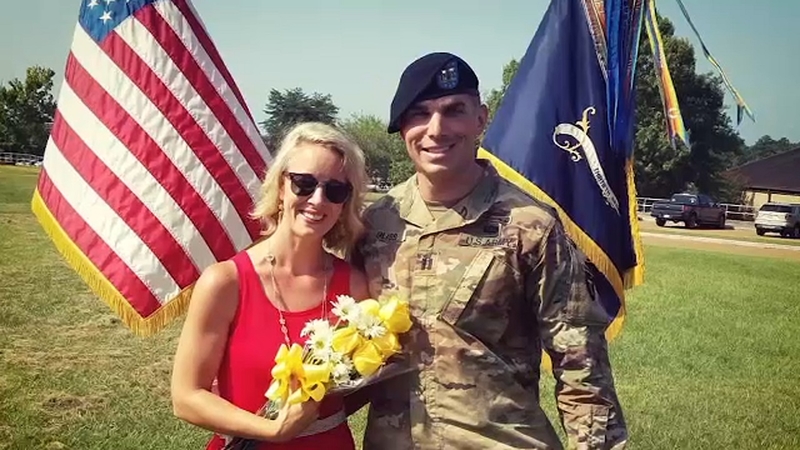 THORNWOOD, New York (WABC) -- Last summer, Melanie Bliss, a Westchester County mom, whose son is a captain in the U.S. Army, had recently returned from his tour of duty in Iraq, and was asked to ship all of her son's army medals, books, certificates and memorabilia to where he is stationed at Fort Polk, Louisiana. In July, she sent it from her local post office.

The 23-pound box disappeared. That is when 7 on your Side got involved.

"It's all my son's memorabilia from his time in Iraq as a Captain in the Army, that's the upsetting part," says Bliss.

The box she sent 'ground delivery' from Westchester County to Louisiana, has been mysteriously MIA since she mailed it and the military mom says she hit a dead-end trying to locate her missing- in-action package for months.

"I mail things all the time because my kids are all over the place. I went in with this huge box, it was July 3rd," she explains.

The West Point graduate was serving in Iraq as a paratrooper when his lungs collapsed. He was rushed back to the U.W. and his belongings did not come with him - they were sent to his parents while he underwent a procedure at Walter Reed Hospital in Bethesda, Maryland. His mom mailed the box to him when he was relocated to Ft. Polk.

But the Captain's keepsakes never made it.

"It's an American flag, it's all his medals, his citations, all the things he was given by Iraq, working with the United States, letters from schoolchildren in the US that were sent to him...everything, everything that was important to him," said his mom, "This is a once-in-a-lifetime situation - everything he experienced, the friends he made the people he worked with...everything."

She says that trying to track the precious package down from the USPS has been mission impossible.

"They say they can't track it, which makes no sense. USPS Customer Service said there's nothing more they can do," she explained.

As the weeks turned to months, his mom was haunted by missing items, "All the stuff he saved how do you get that back?" She wonders.

After an SOS was sent to 7 On Your Side, after we asked the USPS to try and track it down, after searching many locations the USPS said "regrettably after extensive searches, their efforts were unsuccessful".

However, a little over a week ago while visiting their son on his base in Louisiana, the package had been dropped in front of his front door in perfect condition!

Mysteriously at midnight, the package showed up in Shreveport Louisiana, on October 4th - almost exactly three months after being mailed and it was dropped hon his doorstep at the base.

The box was in tip-top shape with all her original tape delivered with all of the medals flags, photos and keepsakes intact and 7 on your Side got a special message from the Captain.

"Hi WABC, it's Captain Mike Bliss. After three longs months, I finally got all my belongings back from Iraq. Without the love and support from my mother and the help from your team, this never would've happened. I'm lucky to have 7 on my side!" said Captain Bliss.

7 on your Side then told the USPS rep the box had been delivered. It was news to them, but after the dust cleared, the Post Office apologized, but offered no explanation on what happened to Captain Bliss' box since July. They're just relieved this story has a happy ending.

The USPS statement in full

"We apologize to Captain Bliss and his mom. The handling of their package from New York to Louisiana is not an example of the level of service we wish to provide.

The postal team works very hard to process and deliver 493.4 million pieces of mail every day. We regret this anomaly and appreciate it being brought to our attention, as it helps identify an opportunity to improve the way we do business." - US Postal Service Northeast Area Spokesperson George B. Flood.

If using the app, click here to send us a news tip
Report a correction or typo
Related topics:
societythornwoodwestchester countymilitary7 on your sideusps
Copyright © 2022 WABC-TV. All Rights Reserved.
7 ON YOUR SIDE
Tips winterize your home and keep gas, electric bills low
How to get reimbursed for at-home COVID tests
7 On Your Side: Tips for ordering your free at-home COVID tests
Woman wrongfully fined $259K for neighbor's violations in NYC
TOP STORIES
Winter Storm Update: Tracking the nor'easter
New Yorkers urged to prepare for snow, wind as nor'easter looms
Wake for NYPD Officer Rivera being held at St. Patrick's Cathedral
Parents livid after 9-year-old girl left locked outside school in cold
Holocaust letter detailing family's death found at NY flea market
Missing NJ mom, 2 young kids found safe, won't be returning home
Mayor Eric Adams vows change amid surge of NYC violence
Show More
Car hits NYC restaurant, which is burglarized the next night
100 bags of fentanyl found in bedroom of 13-year-old who died from ...
Missing NYU adjunct professor found safe at hospital
AccuWeather Alert: Nor'easter approaching
Man sentenced to 25 years to life for attempted murder of 4 officers
More TOP STORIES News
Send us your questions, issues, and story ideas to Nina by filling out the form above, by emailing 7OnYourSideNina@abc.com, or contact Nina on her Facebook page or tweet her at Twitter @7OnYourSideNY! You can also call the 7 On Your Side Hotline at 917-260-7697.