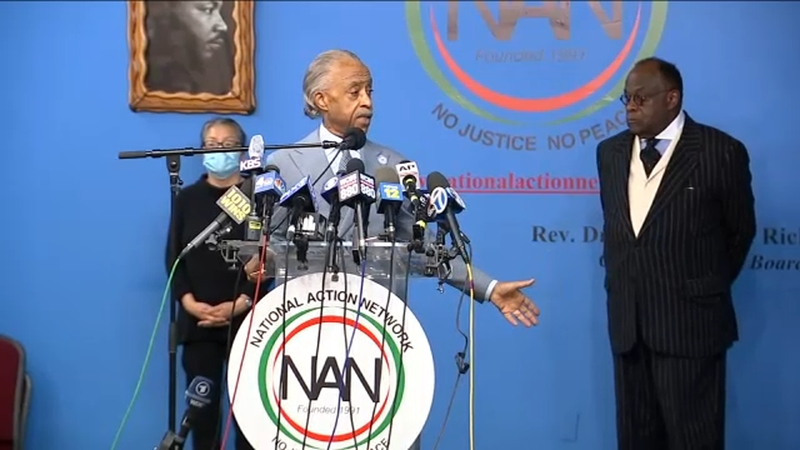 "The Asian American should not have to stand alone," Sharpton said. "And we should not whisper this. We should say it loudly and clearly."

Those in attendance were united in their effort to stop the attacks that have been terrorizing the Asian American community across the city.

"The one thing we all do when one is attacked is we have each other's backs," Comptroller Scott Stringer said. "That's New York City. That's why Rev. Sharpton has us here."

The attacks are unprovoked, including one incident in which a woman was pushed to the ground outside a Brooklyn bakery that prompted calls from celebrities and ultimately ended with an arrest.

"When Maggie Chang's mother was pushed violently in that street, it took Olivia Munn calling attention to it to get an arrest," attorney and activist Maya Wiley said.

The press conference follows a string of hate crimes against Asian Americans, as well as three shootings at Atlanta-area spas on Tuesday that left eight people -- six of them Asian women -- dead.

"All of us do lift our voices, we join together today, to say no," former HUD Secretary Shaun Donovan said. "We cannot allow these acts of violence to continue day in and day out."

The NYPD's Asian Hate Crime Task Force is focusing on the entire city, but they are paying particular attention to the subways after a rash of incident in the transit system.

"Anyone who lives inside these great United States should never be considered an outsider within its boundaries," former Citigroup executive Ray McGuire said.

Standing in solitary, pledging not only support but action.

"This increase in hate crime is a real signal in our city and our country," Brooklyn Borough President Eric Adams said. "And if we do not face it head on, it is going to continue to fester like a cancer."

"I remember vividly growing up with this constant sense of invisibility, mockery, disdain," he said. "A sense that you cannot be American if you have an Asian face."