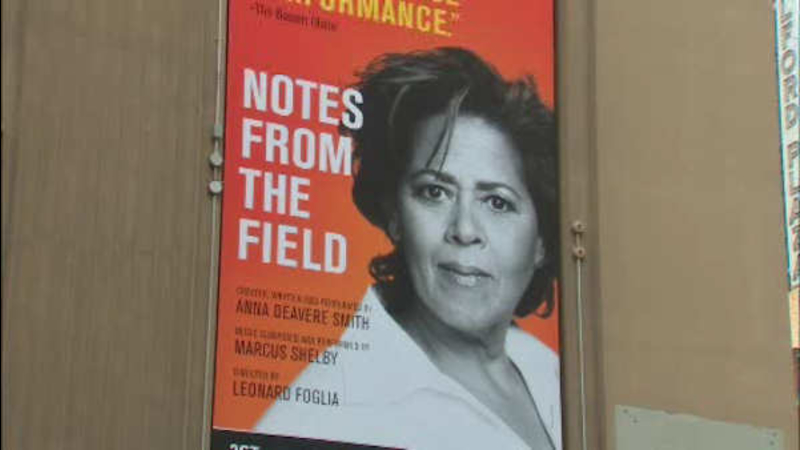 Anna Deveare brings 'Notes from the Field' to NYC stage

NEW YORK (WABC) -- Anna Deveare Smith is an actress and a playwright whose many works take politically-charged issues and bring them to the theater.

Now, she's back to tell new stories on a New York City stage.

It's been almost a quarter century since she made a name for herself as a playwright with her one-woman show "Fires in the Mirror" about the 1991 Crown Heights riots. It resonated deeply in the city, and now she hopes "Notes from the Field" at the Second Stage Theatre in Midtown will do the same.

She plays a parent and preacher who transforms herself into a student and a statesman.

"I make plays by interviewing people, and then taking parts of those interviews and making a play from the excerpts," she said.

For "Notes from the Field," she spoke to 250 people in the south, west and east, landing in her hometown of Baltimore right after the city erupted in protests following the death of Freddie Gray while in police custody.

"It's really, really heartbreaking," she said.

She interviewed the man who shot video on his cell phone, and she uses his footage in her play.

"When people come to see the show and they hear the screams of Freddie Gray, the way he was screaming on the street, it will probably stay with them for some time," she said.

The performer is the daughter of a school teacher and describes it as "doing time in education" to show a link between failing schools and crowded prisons.

"I found out about what a disaster many of the schools are," she said. "Not just in Baltimore, but across the country when it comes to kids who don't have advantages."

She shares the stage briefly with bass player Marcus Shelby, but it is very much her own creation.