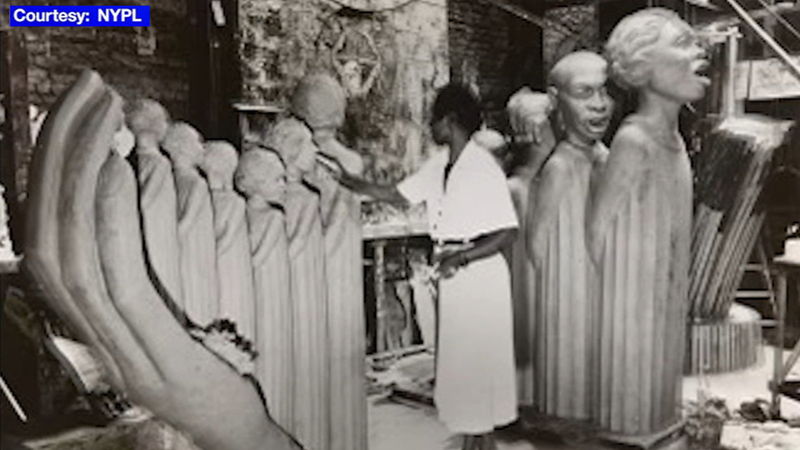 NEW YORK (WABC) -- In our continued coverage of Black History Month, we are profiling a trailblazing art activist, educator and pioneer who was the first Black woman in the U.S. to open her own gallery and also had a piece on display at the much anticipated World's Fair in Queens in 1939.

Augusta Savage was the only Black woman to taking part in the worldwide event, and her piece, "Lift Every Voice and Sing," ended up being the most photographed work.

The 16-foot-tall masterpiece is also known as The Harp, and a rare replica -- one of only a handful in the world -- is on display at the Queens Museum.

"You see this hand, which was really meant to be, for her, she was quoted as saying the hand of the creator," Archives and Collections Manager Lynn Maliszewski said.

The original was destroyed once the fair closed, as casting it in Bronze was simply to pricey.

It was the psychological study that shaped a generation: Drs. Kenneth and Mamie Clark's doll test. Candace McCowan has more.

It would be Savage's last major work before she died in 1962 in New York City, but to this day, it remains a significant force in the art world.

"Her resilience, her dedication, and a waymaker for other artists," said Tammi Lawson, who manages the artwork and material culture collection at the Schomburg Center.

"Harlem was popping," Lawson said. "It was the Black Mecca. She was just surrounded by encouragement, and she just took off."

Savage went to Cooper Union but was crushed after an art program in France that had accepted her rescinded the offer once the school found out she was Black.

"That's when she started being an activist, because she started a ferocious letter writing campaign and the story was covered nationally," Lawson said.

It paid off. Savage did eventually study in Paris, and when she returned to the city, she opened what would later become The Harlem Community Art Center.

"Her school was used as a model for the (New Deal program Works Progress Administration) for the nation," Lawson said. "That's how organized, how good she was."

Savage was unstoppable in so many ways.

"She really had this incredible union between showing art and this creative impulse, but also education," Maliszewski said.

It was something she passed along to her students, including a young Jacob Lawrence.

In the mid 1940s, Savage moved to Saugerties, to a farmhouse that has since been designated a National Historic Place.

She had one daughter and died of cancer at the age of 70, leaving behind a historical legacy for the ages.